Normally I would wait for more than two episodes to come out before I pass this kind of judgement, but like everything else this season Sasameki Koto is so hopelessly wrapped in cliches that its fate is a foregone conclusion.

My esteemed colleague E Minor already pointed out some similarity in character designs, but appearances don’t tell the whole story of how hackneyed and lame the show’s characters are. Murasame may look like Fumi, but actually she’s an even more familiar character, the tall boyish student athlete who “would be popular at a girls school”. Wow how compelling, it’s the same stereotype that appears in every other yuri series ever. 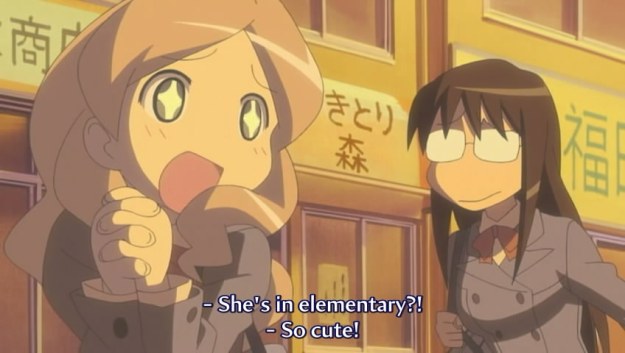 Her relationship with Ushio is even more boring if you’ve ever seen Candy Boy, at least these two aren’t sisters I guess. Combine with the ultra-generic setting and story to produce a snoozefest for anyone who doesn’t drool over cartoon sapphism (‘ultra-generic’ is a term I find myself using a lot this season).

Sasameki Koto typifies the problems with yuri and yaoi as genres. Quite a few people seem to believe that the portrayals  of homosexuality these series offer are somehow progressive or empowering; they are emphatically wrong.  For one thing, the whole concept of seme and uke, tachi and neko, is a reproduction of traditional heterosexual gender roles. In every single yaoi or yuri work I’ve ever seen or read it is made absolutely clear to the audience that one member of the relationship wears the pants. It’s built directly into their character designs, the sporty butch tachi and the frail, limp-wristed uke. 2DT defends this practice in real life as an inevitable consequence of centuries (likely millennia) of gender programming, but yaoi and yuri are fiction. If they’re as empowering as their proponents say they are, why can’t they offer us a vision of what a truly empowering relationship between equals would be like?

The gender roles are so prominent that the only real difference between a yaoi/yuri story and a normal romance, is that the characters are gay, and there’s something downright insidious about the whole idea of genres being based on the sexuality of the characters. If these stories dealt with the discrimination faced by homosexuals in society it would be one thing, but almost always the issue of LGBTQ rights is marginalized or outright ignored. Often a disproportionate percentage of the student body (these shows always are set in schools) is also gay, and the characters are always accepted by their peers after coming out.  The real focus is always on the homosexual relationship, which generally plays out the same way a heterosexual relationship in a shojou story might, except gay.

What this amounts to is the fetishization of homosexuality. Why else watch a yaoi or yuri show if you think all sexualities deserve equal rights and are not gay yourself? The draw of these shows to their heterosexual audience is the dirty thrill of forbidden love, not a desire to see normal, healthy relationships between people they relate to. There’s a term for entertainment that focuses on an oppressed segment of society without actually sympathizing with it: blaxploitation.

The whole concept of LGBTQ rights is that people of all sexualities should be treated equally. Holding up gays as objects of lust might be a little better than displaying them as objects of derision, but it is not the same as really accepting them as fellow human beings.

Are there exceptions to the rule? Of course. I’m not a big fan of Aoi Hana or Horou Musuko, but they do put the spotlight on the real problems of confusion and discrimination instead of just milking the characters’ sexuality for all it’s worth. And there are other series out there where the homosexuality of the characters isn’t the central focus of the story. And as 2DT pointed out, at some point we have to realize that the ideals we have for gender relations are not going to be realized in our time, and acting as though we don’t suffer from some amount of preconceptions is silly. But we should aspire to better, and the vast majority of yaoi and yuri are just reinforcing deeply-ingrained prejudices about sexuality in a new way.