If you have what it takes, I’ll let you [save the girl].

All I need is what it takes, right?

Do you think you can kill me? Its been one hundred years since I’ve seen someone this interesting. Then let’s see what you have!

Omoshiroi! Omoshiroi! Omoshiroi! Just imagine two powerful entities standing across from each other, braying on and on about how interesting the other foe is. It’s a sad reality that the writing in these lameass anime still haven’t progressed since Dragon Fucking Ball.

It’s been a long time since I’ve met such an interesting foe.

I’ve been waiting for this day.

So goes one of the many brainless conversations in the action slash magic fantasy slash fanservice comedy anime titled Ichiban Ushiro no Daimaou. If that sounds like a mouthful, it’s only because Ichiban doesn’t really know what it wants to be. It was, however, originally a light novel series by Shotaro Mizuki, but Ichiban might as well be anime because it simply bleeds anime. The TV adaptation was handled by Artland, a studio that apparently hasn’t produced anything since 2008. The studio cut its teeth on the solid Mushishi back in 2005-06, but ever since then, it has been a string of mediocre jobs for Artland, ranging from the generic romcom Umisho to the disappointing Gunslinger Girls II. How, then, does Ichiban stack up?

Sai Akuto is merely transferring to his new school when, much to his chagrin, the black chicken of fate has decreed him to be the next Demon Lord. Needless to say, Akuto’s school life has been turned upside down and there are no rich relatives in Bel-air to bail him out.

Pacing…? — This is a question only because I had to really dig to find what I liked about this anime. It moves at a fairly fast pace and doesn’t stall on any irrelevant side story as we get to see Akuto fulfill his destiny of becoming a Demon Lord.

Inconsistent tone — Sometimes, Ichiban is a silly romcom harem with slapstick and girls finding themselves in uncompromising situations.

Other times, however, Ichiban can be angsty as all hell. Akuto’s sidekick, Hiroshi, struggles with his perceived weakness. What makes him weak? We don’t really know. We just know he’s not capable. Fujiko, on the other hand, seeks to understand her brother’s tragic fate. While she’s doing that, however, she keeps his undead and severed head in a jar with its eyes sewn shut. Classy girl.

When the girls aren’t busy getting naked and the atmosphere hasn’t quite turned serious, the anime becomes a silly shounen adventure. Our heroes go traipsing around on the school’s impossibly immense campus, hunting for lost treasures and artifacts: 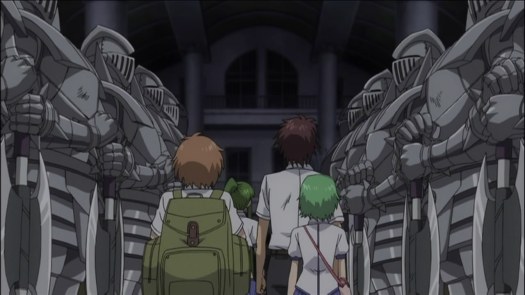 The story just seems confused and the direction muddled. No, an anime doesn’t have to be confined to a single genre, but Ichiban lacks the writing to pull it off. We neither cherish the highs nor fear the lows as they come.

Fanservice and more fanservice — I’ve wondered this before but how does a light novel even handle fanservice? But regardless, Ichiban is as titillating as a blunt needle in the eye. Every female character in the anime has her own gimmick.

One girl must constantly strip naked because her magical ring isn’t quite on par with the “one ring to rule them all.” It’s conveniently incapable of rendering her clothes invisible else well.

Another girl is really an android, who can be shut down by a bunny-like tail just above her ass. Every time Akuto wants to put Korone out of commission, you can pretty much expect a panty shot. This seems self-defeating, by the way. Shouldn’t fanservice be unexpected and surprising?

And poor Junko… being the designated tsunderekko, she’s the target of the anime’s most humiliating scenes. From having her clothes blown off

to having white, sticky fluids sprayed copiously all over her face by a “sea cucumber,”

Junko never sees the end of it. It seems that the stronger a female character appears, the more tempting it is for anime to knock her down a peg; the prouder she is, the more necessary it is to humiliate and defile her.

Generic characters — There’s nothing unique about Akuto aside from a few curious markings under each eye. Like all harem lead, he’s just the misunderstood hero with unlimited potential. Of course, he can’t control his power yet.

The rest of the cast is just as uninspiring. Junko’s satisfies the tsundere requirement, Korone is the Rei/Yuki clone, you have some loli with a silly hat, blah blah blah. You can probably imagine the rest. And in case you couldn’t guess, they’re all in love with Akuto from the moment they laid eyes on him.

— Lots of lazy animation here. Do you need a giant explosion? Don’t bother animating it. Just grab some cheap effects and run a ton of filters on it. Voila! 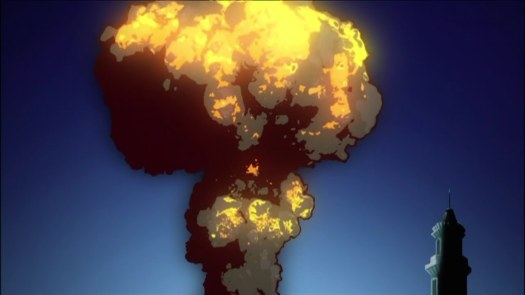 — The characters can be really stupid at times. Ooh, menacing black tornado. I guess I’ll just leap headfirst into it with a sword. Oops, now my clothes are all torn off.

Akuto is no exception. At the end of the third episode, he learns that the pills Fujiko gave him were really “a type of black magick that compels loyalty to a particular individual.” Gosh, sounds kinda fishy. Except this is completely forgotten by the next episode. Akuto proceeds to treat Fujiko like a good friend.

— Lots of juvenile sound effects. The anime doesn’t want you forget it has fanservice. Just in case you’re not paying attention, these scenes are often accompanied by some pretty annoying audio cues of women moaning for apparently no reason. Korone lying in Akuto’s bed with her shirt unbuttoned? Play the sound clip, guys: “Awwwwngggggh~”

Ichiban Ushiro no Daimaou just offers nothing new. It’s a repeat of everything unoriginal currently plaguing mainstream anime. In some aspects (e.g. the visuals), it feels like a step or two backwards. The question, then, is why bother? There are quite a few solid shows this season to waste your precious hours on so there’s really no reason to bother with Ichiban. Unless, of course, you think of these crappy harem shows as comfort food for the anime-starved soul. In that case, enjoy treading across familiar territory for the umpteenth time.

15 Replies to “How interesting are you, Ichiban Ushiro no Daimaou?”