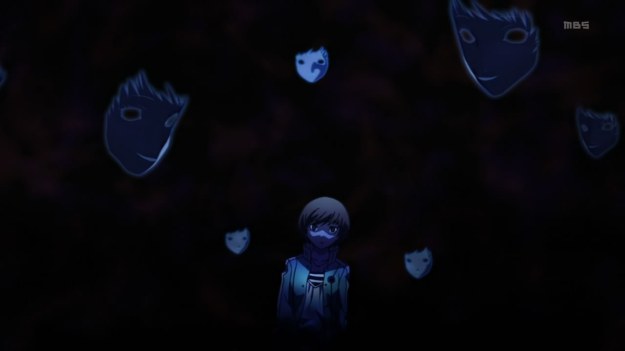 I like the idea behind this scene; its execution just leaves something to be desired. Still, Persona 4, as an adaptation, needs more of this sort of thing. The anime adaptation may lack the interactivity that made the original special, but it can nevertheless rely on the strengths of its medium. And what are those strengths? Cinematography. Fans of the game already know that Chie will come to grips with her darker side. Still, it doesn’t hurt to spice the pivotal moment up with some flair. The masks representing facets of Chie’s conflicting nature is thus a good idea. Unfortunately, the adaptation doesn’t really try to realize the idea to its fullest extent. All of the masks look the same and the end result is that the scene looks lazy. For instance, if they all represent Chie, it wouldn’t have hurt to vary some of the masks’ expressions.

For the most part, it seems that P4 is destined to be an okay adaptation held back by a lack of budget or technical prowess. The animation just isn’t all that impressive, and the indirect consequence of this is that the fights aren’t as interesting as they could be. At the moment, the characters summon forth their personas and they do battle like Pokemon characters or something. In the game, there’s pretty much a fixed perspective during the fights. Sure, the camera will swoop in every now and then, but Atlus isn’t exactly Square-Enix; the fights are very much by-the-numbers — functional but a little boring. The anime thus has the chance to rectify this problem. How? Just pack a little more punch into the fight scenes, but for whatever reason, everything plays out in a rather ho-hum style. I mean, it’s nothing you haven’t seen before. In general, I guess fight choreography in anime just hasn’t evolved much since the early shounen days.

Lastly, is it just me or does the narrative seem somewhat hollow? I don’t know what the exact problem seems to be — maybe a lack of music during certain scenes or just the pace in general — but it sometimes feels as though I’m watching a collection of disjointed events held together by a thread rather than one cohesive anime. Y’know how certain games have a “movie theater” feature where you can watch previous cutscenes without having to replay the game? Imagine if you sat down and played these cutscenes back-to-back and you’d have something much like P4. At times, there just seems to be a scene missing where there should be one.

On the plus side, I’m enjoying the main character’s characterization more often than not. Does he have the depth of, say, Hamlet? Of course not. Still, I like his deadpan humor, but more importantly, he seems unobtrusive. Often times, the shounen hero dominates the narrative so much that the camera is always fixated upon him. Hell, the audience even gets to be privy his thoughts. Unless Yu is giving a half-sarcastic response to his friends or kicking shadow ass, however, he pretty much stays out the way. Is this ideal? Probably not, but it’s a decent compromise when one compares him to the rest of the anime landscape and its pathetic heroes.

On a lighter note, I had no idea Chie’s persona was so ripped.

6 thoughts on “Persona 4 Ep. 3: Still a little too mediocre”