The problem with Ao Haru Ride is that I’m just not interested in any of its generic high school antics. Honestly, the first half of the episode actually had my interest piqued. Kou finally apologized to Futaba for standing her up that one fateful day back in middle school. He confessed that he had really wanted to come see her, but his family started to fall apart around the same time. With his life turning upside down, seeing some middle school crush was probably the last thing on his mind. This scene really felt like it could’ve been a breakthrough for the entire story. After all, Kou’s backstory is the core of the show’s pathos. He gives the story its much needed depth. In fact, his troubles are actually, well, relevant, especially when you consider how high school represents only a few short years of our young life, but I’ll get to this later. For now, let’s talk about where the episode bored me to death.

Immediately after the first half of the episode, the new school year begins, and well… this is just about the dullest thing the story could possibly show me. Basically, Futaba finds herself in the same class as Kou, Yuki, and all of the other major characters of the show. How convenient! She’s determined to be Yuki’s friend this time around, instead of letting the rest of the class get a bad impression of the shy girl. Aw, that’s nice. Then afterwards, Futaba volunteers to become the female class representative. Oh boy! When she asks the class who would want to be the male representative, Kou raises his hand! Wow! But uguu, don’t take him the wrong way. He only wants to get this process over quick so he can go home. I-i-it’s not like he wanted to work beside her or anything! Anyway, the two of them ask for three event representatives, and naturally, the rest of the major characters raise their hands too. These five are sure to have a shining high school life, I’ll tell you what! 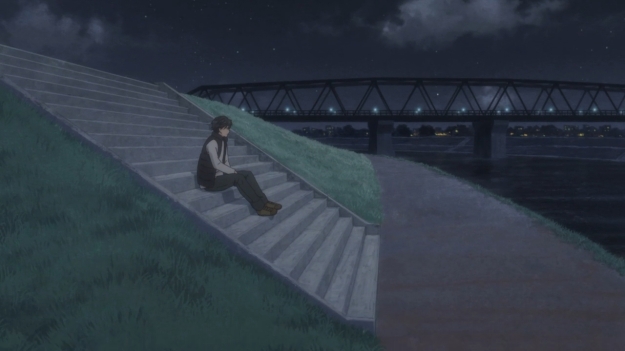 That’s why I can’t take any of Ao Haru Ride’s high school scenes seriously. Becoming the class representative, making friends that you’ll lose touch of when you graduate, joining a new class, etc. None of these things will matter in the long run. They only matter in the heat of the moment, when you’re an overly emotional teenager because your hormones are at an all time high, and you’ve never experienced any real troubles before. Kou’s broken family, however, is something that will affect him for the rest of his life. This has some real weight. As a result, that’s the story I want to hear. That’s the story I want to delve into. When Kou stood his own brother up later that day, I wanted to see the anime explore the relationship between the two siblings. How did it get to this point? And sure enough, the anime will eventually broach that topic. I have no doubts that it will. The problem is that I’m not sure I’ll be sticking around long enough to see this happen.