Yep, as you can see from the screenshot above, we got one of those lame endings. Read on to see how this all unfolded.

— I didn’t even realize Bizon’s new mecha had a penis until a commenter pointed it out to me. Thanks, commenter!

— I would say it’s unbelievable that a guy would stew in resentment for seventy years over losing a girl, but at this point, does it even matter? Nah. But seventy years, man! Still, you’d think at least one person in those seventy long years would’ve told the guy to seek therapy.

— We get awesome lines from Bizon, e.g. “Become a lump of flesh and die!” Your old years are not treating you well, Bizon, ’cause Aoba already is a lump of flesh…

— What’s apparently special about Bizon’s mecha, however, is that it’s Coupling… with itself. I shit you not, the guy is connecting to himself. Talk about masturbatory.

— Meanwhile, Hina’s old allies are mad at her… I feel like they’re only fighting just to keep Hina busy. With Aoba trying to keep old man Bizon at bay, Hina’s gotta have something to do. But that’s primarily the problem with these last two episodes. Like I mentioned in the previous post, the storytelling here feels like an obligation. When Tarjim calls Hina a traitor, there has been no build up to it whatsoever. Hell, we hardly even know Tarjim. So instead, it just feels like he’s simply reading his lines, fulfilling a part he has to play, etc. They just fight because it’s the last episode and they have to fight, not because everything has organically led up to this point. 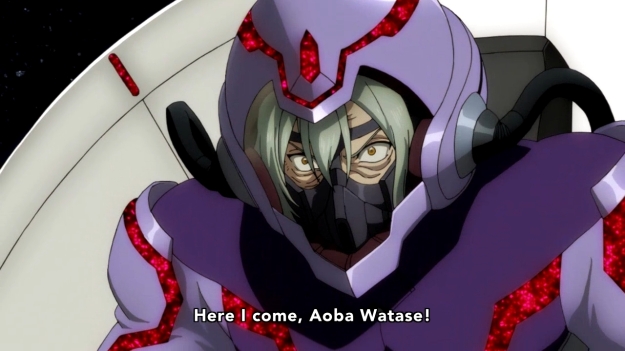 — Unfortunately for Bizon, he has the same limitations as everyone else: your brain gets fried if you Couple for too long. So after running out of juice, he demands that Hahn removes the Limiter on his mecha. From what I can tell, however, removing Limiters don’t seem to do jack shit these days.

— But Hahn fulfills Bizon’s request anyway, so the crazy guy becomes even crazier. The yandere in him becomes even… yandere-ier, I guess.

— Bizon then tells Hina to stay right there: “I’ll spend plenty of time playing with you once I’ve killed Aoba.” Yeesh.

— So the good guys just do exactly what Bizon is doing: they’re going to solo Couple. C’mon, at that point, do you even have to call it Coupling anymore? And yes, Elvira and company “threw this thing together” in the time that Aoba was trying to hold Bizon off. I know we only have two episodes to finish this entire story up, but we’re not even trying! Naturally, Elvira stands there, talking about the brand-new solo Coupling system to nobody in particular. Exposition ahoy! She then explains how Bizon was able to interfere with the standard Coupling system like it really matters to the audience. No, really, do the finer details really matter to you guys with just ten or so minutes left in the episode? I don’t think so…

— I wonder if the writers had a second season full of gimmicks planned out. Like at first, they’d do solo Coupling ’cause maybe Dio got jealous of the bond between Aoba and Hina. Then eventually, the power of friendship brings Dio around, so the three of them then do triple Coupling. But since we only have two episodes left to wrap the story up, we’ll just unveil these two gimmicks back-to-back.

— Something something about Aoba and Hina having the exact wavelength, so they’re like the same person. As a result, tripling becomes possible. If one Aoba wasn’t good enough, have two!

— We thus see how this whooooole mess even started. In the original timeline, Aoba and Hina went on to graduate from college and become research scientists. They thus developed and performed the very first Coupling experiment… on Hina. Somehow, she got sent to the future, where she then fought for the good guys. In a battle against Bizon, however, she then got sent back to the past somehow… and the rest is history. Very, very boring history. I’m not sure if a montage set to some insert song was the best way to go about it, but… eh, time constraints. At the end of the day, however, this montage means that our final chapters have even less content. I mean, sure, we learn how Hina got caught in the loop in the first place, but it wasn’t a huge revelation or anything. She was a researcher and she fell through a wormhole. That doesn’t really justify such a long montage.

— If you thought the coup d’etat in the previous episode was sudden, it seems as though there has been a reverse coup d’etat! And guess who led the charge! Why, it’s our good friend Margaret! As a result, Alfried tries to arrest Bizon. Tries.

— Bizon immediately goes even more nuts, grabs Hina’s mecha, then squeezes hers to his own. We then get lots of rape undertones for no reason: “It’s your fault. If you’d only quietly laid down beneath me…!”

— So Aoba returns with, “I can understand a little of how you feel. Having watched Hina all this time…” Dude, what the fuck is there to understand?

— But before Bizon dies, he commands the Gorgon to unleash all of its power at the same time. In doing so, the satellite will wipe out the entire planet. Oh good, let’s destroy mankind ’cause Aoba NTR’d your ass. Classic anime storyline. Just like how the bad guy in SAO became a murderer just because his super special build became popular thanks to another player. I feel like we’ve given up on giving our villains any sort of realistic motivations. They just go nuts, because going nuts is easy as hell.

— In any case, with all this energy being unleashed, you know where this is going… we’re going to get ourselves another wormhole. I mean, you didn’t think Aoba and Hina would stay in this timeline, did you?

— Thanks to the power of Coupling, Aoba and Dio are going to throw themselves at the Gorgon in a last ditch attempt to destroy it. But then something weird happens, and our two heroes start skipping in time… this is according to Elvira, okay? Honestly, her resulting explanation all sounds like pure hogwash to me, but enjoy the last bit of exposition in the final episode of Buddy Complex.

— I mean, let’s just skip the bullshit. Long story short, our heroes travel back in time just a few moments to before the satellite’s about to go off. This way, they can destroy it before it destroys Earth.

— Aaaaand as soon as the satellite blows up, a wormhole appears. Who would’ve thought! Aoba gets sucked into it, and Hina decides to join him. Dio cries for his departing friend, but… but that’s it. Just a whole bunch of asspulls.

— Seriously though, Buddy Complex‘s asshole must be fucking tired! Let’s take stock at all the bullshit we’ve just pulled out in the last twenty minutes alone. First, Bizon solo Couples, so our heroes joins him just to keep up. Next, to really beat Bizon, our heroes triple Couples… yeah… Not to be outdone, Bizon wants to go all Death Star on the planet, and destroy everything just because… just because what, actually? He lost Hina, Aoba showed him up, and… that justifies sitting around for seventy years in order to take over an entire republic, then use the republic’s resources to blow up the planet? Sure thing, buddy! Ah, but nobody asspulls like the good guys. As a result, Aoba and Dio jump constantly back and forth through time until they get to a point where the satellite hasn’t fired off its laser yet. Then a wormhole conveniently appears to shove Aoba and Hina back to their original timeline. There’s no profound reason why the singularity must appear. It simply does because Sunrise is tired of this shitty franchise that never went anywhere, so let’s just wrap this shit up and be done with it.

— I guess with Bizon and his old-but-not-quite-so-old government gone, there is now peace between Zogilia and the Confederate. That was easy.

— Elsewhere, Elvira and Lee finally tie the knot, and to add insult to injury, Mayuka catches the bouquet. Who’s she going to marry with Aoba missing?! Well, he should be an old man now… 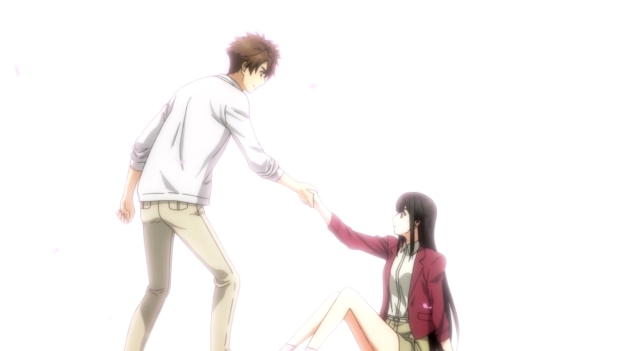 — Then as one final fuck you to the audience, we see a scene in which Hina bumps into Aoba at college, and even though she feels as though she’s met him before, he says that they have not. Since they don’t remember anything, who’s to say this bullshit time-traveling nonsense won’t just repeat itself? The writers must be patting themselves on the back for coming up with that.

— That was… that was bad, man. Since Buddy Complex wasn’t popular enough to justify a second season, you’d think the writers would use this opportunity to take the show in a wild direction if only for just the final two episodes. I mean, who would it hurt? It’s not like the series had a lot of fans to begin with, y’know? So why not just go crazy with the finale and really entertain us? Unfortunately, Sunrise gave us more of the same. Another showdown with Bizon. Another Coupling system… what’s that? You want more Coupling? Triple Coupling! Then of course, we get the dumb reset ending. Why play it so safe? Nobody even likes this shit, so again, why the fuck would you play it so safe? Oh well. I can now finally say that I’m well and truly done with Buddy Complex for good.