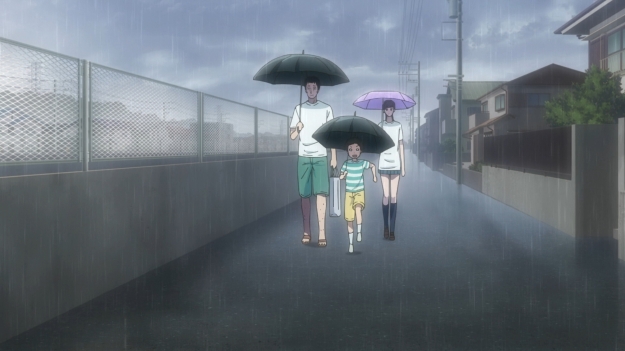 With a hamster in tow, Yuto looks for his father at the diner, but his old man has the day off. The kid then decides to drop by Kondo’s apartment, but a young child shouldn’t be wandering the streets alone (nevermind the fact that he apparently managed to reach the diner by himself). As a result, Akira jumps at the opportunity to accompany her manager’s son. Kondo’s apartment is what you’d expect to see from a young, single bachelor in college: the fridge is practically empty, the bed is unmade, there are stacks of old magazines and empty cans on the floor, books and clothing strewn about, crumpled papers, and an ashtray piled high with cigarette butts. But of course, our manager is in his mid-forties. By society’s standards, he’s too old to live like this. He even has a child to call his own, so what sort of example is he setting for Yuto?

And yet, Akira does her very best not to disturb Kondo’s living quarters. For most of her time in the apartment, she plays the role of the passive observer. When she first arrives, she delicately places her shoes between Kondo and Yuto’s pairs. More importantly, she slides them closer to Kondo’s shoes. She’s not interested in becoming Yuto’s surrogate mother. She’s only desires to be Kondo’s lover. And as a result, she does not cast a judgmental eye on the unseemly state of Kondo’s apartment. Rather, she becomes a voyeur — a stalker obsessed with the object of her affection. She wants to know more about Kondo. She wants to know his everything. Akira could easily slide open the door to her manager’s study — it’s not like he would notice — but on her knees, she opts to peer through the crack as if she’s performing an illicit act. The girl only snaps out of her fantasy at Yuto’s behest. His hunger forces Akira to emerge from passivity and thus become more maternal. 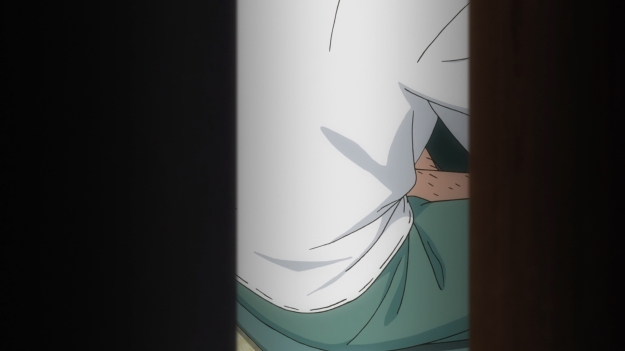 Akira would soon return to her passive, voyeuristic state, though. Just as Kondo returns to his apartment, Yuto convinces the girl to hide in the closet, but it appears as he quickly forgets the prank that he intended to pull on his unwitting father. Again, she can peer through the sliver, but this time, the manager is present in all his nakedness. In his apartment, without any knowledge that he is being spied upon, the manager is no longer the manager. He is without his uniform. He is without his facade. By becoming the voyeur — the ghost within the walls of Kondo’s apartment — Akira is thus able to glimpse his vulnerability. Soon, Akira’s cheeks are flushed red, and she is drenched in sweat. She can no longer contain herself within Kondo’s periphery, so she bursts forth from the closet in a fit of passion. On the surface, our heroine nearly suffers a heat stroke. But in her subconscious, it is as if she had played the Norman Bates to Kondo’s Marion Crane. But we’ll revisit this in a bit.

For Yuto’s part, he plays an innocent but impulsive role in imposing his childish (but understandable) desire to be nurtured onto his father’s personal space. Of course, he gets hungry and needs to be fed. But when his father is only moments away from entering the apartment, he quickly disposes of Akira. Did he get here all by himself, Kondo wonders. Yuto answers affirmatively. Did he really fix that dish of omurice, Kondo skeptically asks. Again, Yuto answers affirmatively. First, it’s as if he wants to erase Akira’s intrusion. This is not just Kondo’s personal space, but it’s not hers either. It should really belong to Yuto and his father. But at the same time, I’m not suggesting that the kid is doing any of this deliberately. As I suggested at the start of this paragraph, he is merely being innocent and impulsive. He is the id unchecked. As quickly as he hatches a prank to play on his father, he quickly and conveniently forgets about it. And as a result, even Yuto cannot recall Akira’s existence. But second, and perhaps more importantly, he is simply begging for his father’s attention. Yes, I made it all the way to your apartment by myself. Be proud of me. Yes, I made that dish by myself. Be proud of me. Most of all, we discover why he so badly wants his father to take care of the hamster: it’d give him a reason to see Kondo more often. But what son needs more reasons to see his father? Can’t you simply see your father because you want to? The only impediment to this would be if your father is not, well, really acting like much of one.

And so we finally arrive at Kondo and his ambiguity. This same man is a manager of a diner, so he’s the big boss. And yet, his subordinates do not respect him. They talk to him behind his back. It doesn’t help that Kondo adopts the very familiar position of “The customer is always right.” As a result, he often bears the brunt of their ire when something goes wrong. This only serves to lower his employees’ opinion of him even more. So right from the get-go, Kondo straddles the line between authority and impotence. This same ambiguity exists between him and his son. When Yuto claims to have reached his father’s apartment all by himself, the man thinks to himself, “I don’t know whether to scold him or praise him.” His own child even points out this ambiguity (and inherent hypocrisy):

Yuto: “What? You’re eating that again, Dad?”
Kondo: “This is what I like.”
Yuto: “You always eat the same thing.”
Kondo: “It is my favorite meal.”
Yuto: “But you always tell me not to be a picky eater.”

One of them should be the father and the other a child, and yet, it almost feels as though Yuto is lecturing Kondo. Upon learning of the hamster’s existence, Kondo tries to avoid taking on the responsibility of being the animal’s caretaker. After all, he can barely take care of himself if the state of his apartment is anything to go by. But how Yuto invite himself over if Kondo can’t even clean up his apartment? There’s barely even anything for the kid to eat. Likewise, if Kondo can’t care for a hamster, how can the man play father to an actual living and breathing human child? The hamster is not just an excuse for Yuto to visit his father. It’s forcing Kondo to confront his fatherhood by literally taking the easiest, simplest step possible: raising a tiny rodent that can subsist on just cheap vegetables and will barely take up any space. If Kondo can’t manage that, then how can he even call himself a father? But does he even want to be one? He treats Yuto well enough when the kid is around, but his actions when Yuto isn’t around says otherwise. Therein lies the ambiguity. 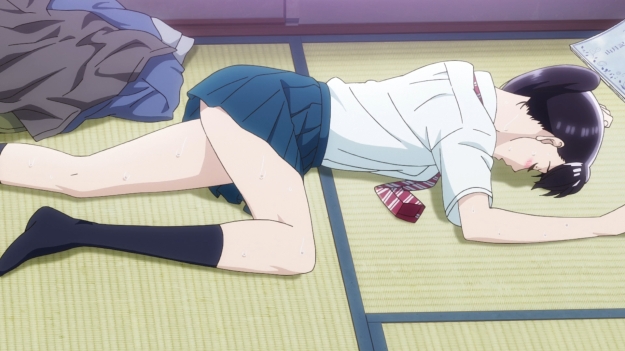 But upon learning his son’s true intentions, Kondo can’t help but relent. It is really during this particular father-son conversation that Akira seems to become increasingly agitated and uncomfortable. Of course, the naturalistic explanation is that the heat in the closet built up over time, and by the time Kondo and Yuto started talking about the hamster, it had become unbearably hot in the closet. But these shows function as dream factories, and as I have argued extensively throughout this post, there is a kind of strange, mutual interlocking of fantasies taking place in this apartment, an oscillation between three focal points. Akira desires a lover, Yuto desires a father, and Kondo desires youth. The manager’s concession to his son seemingly hammers home the harsh reality that he cannot escape fatherhood. A responsible adult — a caring and nurturing father — and a 45-year-old man who engages an underage teenager in an illicit, taboo romance is a contradiction. And so Akira is forced to abandon her passive, voyeuristic role once more in order to remind Kondo that she is no mere fantasy. By dramatically collapsing on his bedroom floor, her skin glistening with sweat, her breaths sharp and haggard, Akira and by extension her love for him are no mere figment of his imagination.

What has happened is that Yuto had subconsciously reduced her to nothing more than a ghost in the apartment, but Akira is possessive. She even sheds her own skin to wear Kondo’s (for context: she had to change out of her soiled shirt when Yuto accidentally spills tea on her). We see this clearly in the final minutes of the episode. She wants to give her manager a list of what he needs to buy in order to care for the hamster, but she won’t do it in the presence of others. Why not? It’s not like she is delivering a personal love letter, but in her mind, it may as well be. Akira’s anger eventually boils over as she screams at the rest of her team to stop obsessing over Kondo’s new pet. And yet, she hypocritically proceeds to talk to him about said pet. So we can see how much she desires him to herself. And even though she would never deliberately try to put distance between Kondo and Yuto — hell, she’s even helping her manager become more paternal by helping him with the hamster — she couldn’t help but make her presence be felt at his apartment. She couldn’t help but take on an active role once it seemed as though Kondo was about to step to the plate for Yuto’s sake. 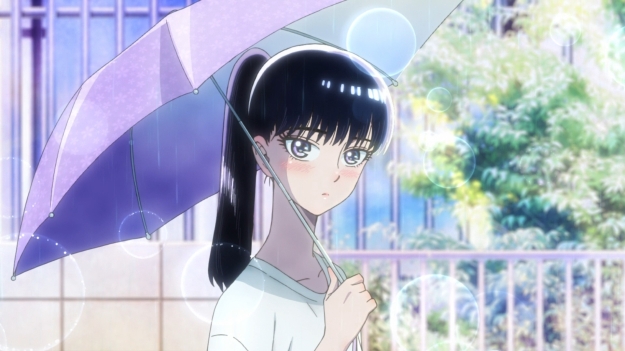 Afterwards, Kondo later escapes to a nearby laundromat to collect himself, but interestingly enough, Akira is predominantly on his mind. I only find this curious because his own son just practically confessed how he wants to see his father more often, and yet, Kondo’s thoughts are elsewhere. And later, when it begins to rain, Kondo looks at Akira, hears her words — “I want to know more about you” — and he is reminded of his desire to reclaim his lost youth. Oh, by the way, she adds that caring for a hamster is difficult. In other words, caring for a child is even harder.

All in all, this is a fascinatingly crafted episode, though I’m sure I’ll get some push back on my interpretation of the events. Oh well.