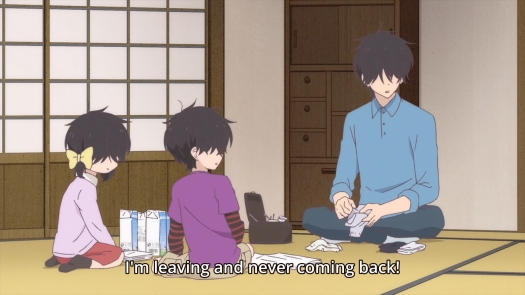 I want to grab a pair of scissors and cut all of these kids’ bangs. Anyways, welcome back to Gakuen Babysitters, and we already know how this goes. Every episode lately has featured two short stories, and this one is no different. The first shot story concerns Chukichi and his family full of kids that can’t afford haircuts. Every story needs a conflict, so one of his younger brothers ends up running away from home.

We later find the kid stuck in the bushes outside the chairwoman’s home. Yeesh, isn’t he a little too young for this scenario? C’mon, guys… be sensible. But on a more serious note, Ryuichi tries to help, but the obstinate kid slaps his hand away.

For some reason, this is enough to send Kotaro deep into space. I always thought he was a bit of a spaceman anyway. 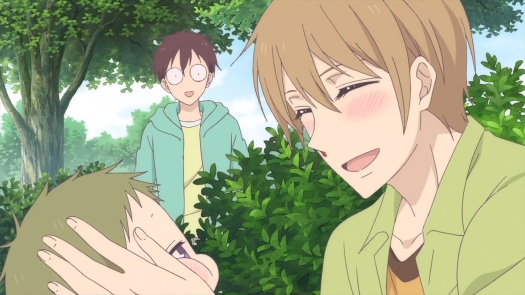 Needless to say, the village pervert shows up.

And no kid is spared.

For some reason, Maria is also here. Tomoya claims he just bumped into her, so he invited her to come along. But all she ever does is yell. 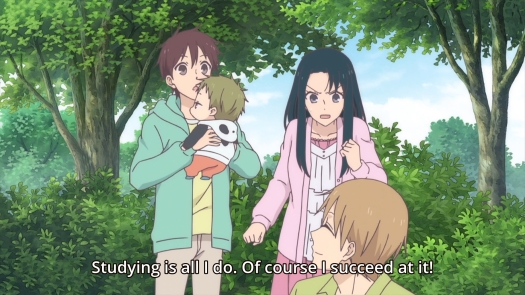 Holy shit, she’s still going. Doesn’t she ever get tired of yelling? Doesn’t it stress her out? Doesn’t it emotionally drain her? Or is she just too one-dimensionally written to care? I bet it’s the last one, huh?

At one point, the kid cell divides (read: one of his brothers shows up and decides to get stuck too) and confesses that he ran away from home just because his father wouldn’t buy him a video game. Yep, a video game. Ryuichi goes, “I’m sure Kichi-kun has a reason he really wants that game.” Yeah, ’cause they’re fun as hell. But it’s Gakuen Babysitters, so you know there has to be some touching, emotional reason for the kid to want a video game. Apparently, all the cool kids at school have the best games, and he doesn’t have any. The kid is tired of feeling left out. We also learn how Chukichi has a part-time job, does all the chores at home, and still has enough time to study hard enough that he finishes second to only Maria. Yawn.

Ultimately, the problem is that the family is poor. Mean kids at school shouldn’t brag about their games, because this makes poor kids like the ones from Chukichi’s family feel bad. But here’s a somewhat politically incorrect opinion that the anime won’t suggest: don’t have so many goddamn kids. Chukichi comes from a family of eight. E-I-G-H-T. Look, if you’re poor, you shouldn’t have that many kids. Maybe you shouldn’t have kids at all. It’s just irresponsible, man. You bring all these people into existence when you can’t even afford to. What’s the point? It’s not like they live on a farm so they need all the help they can get. If you can live in the city, then you don’t need that many kids.

People will argue that these kids have a roof over their heads and a dinner table full of food, and that’s all that matters. That’s naive. Kids can be picked on for all sorts of reasons, and while peer pressure doesn’t necessarily justify the purchase of an expensive video game, it’s not just about games. It’s about clothes, learning supplies, food, etc. If you can’t meet those needs, why the fuck are you pumping out eight children? 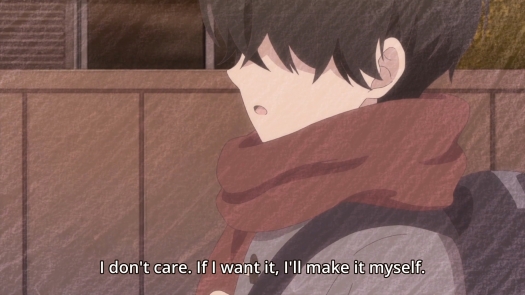 But like I said, no one in the anime is going to argue that point. Instead, they just point out that Chukichi is cool precisely because he rather works for what he wants instead of getting it as a gift.

So the kids learn their lesson, and they find out that their father bought them the game anyway. They’ll have to do a few more chores as a result, but it turns out the family could afford video games. You just have to threaten to run away. My point still stands though: even if you’re filthy rich, you don’t need eight kids. Anyways, all’s well that ends well. 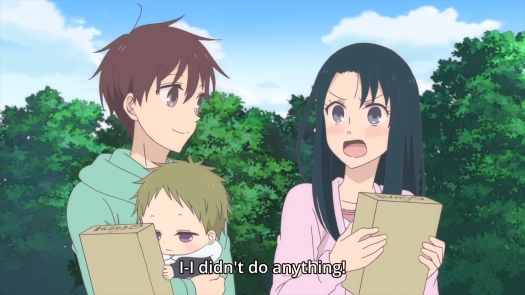 I know, right? What did she do? 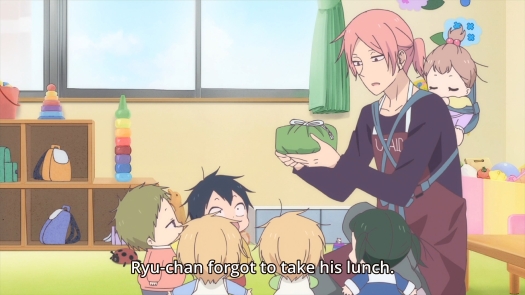 In the second story, Ryuichi forgets his bento box back at the daycare room. That’s no big deal, right? Yoshihito just has to send a text and tell the guy to come pick it up, right?

Nope. He sends Kotaro to go out and deliver the bento box. Since Yoshihito still has to watch over the other kids, Kotaro’s on his own! He eventually feels a little guilty about this… a little.

So he bribes Inui into making sure nothing bad happens to the little kid. Greeeeat.

The sad part is that when all the other high schoolers see Kotaro, they don’t do anything but stare at him. Hey, it’s the kid’s first errand so… uh… we can’t interfere or something. Safety be damned.

Ryuichi eventually realizes that he’s missing his lunch, so Yuki quickly offers hers to him. She claims she’s dieting. Psst, it’d be more romantic if you guys just shared the lunch. Also, we still don’t know anything about this girl other than that she’s considered the cutest in class, but Ryuichi doesn’t find himself particularly attracted to her. 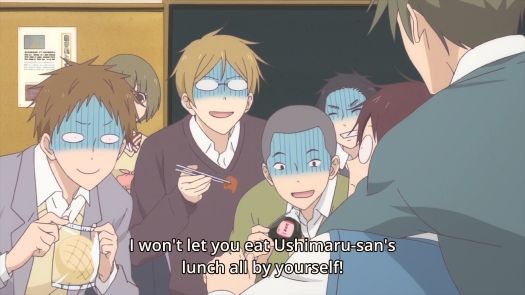 The other boys suddenly pitch in their lunches as well, because they can’t stand the idea of the main character getting to eat Yuki’s lunch. 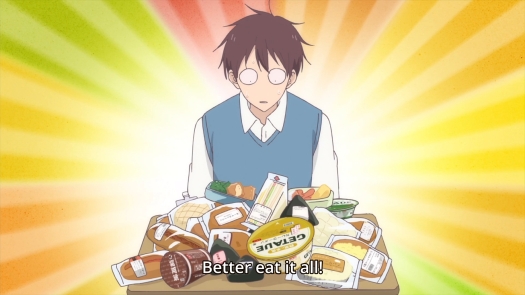 Yep, this is the sort of hard-hitting story that you can expect from Gakuen Babysitters. 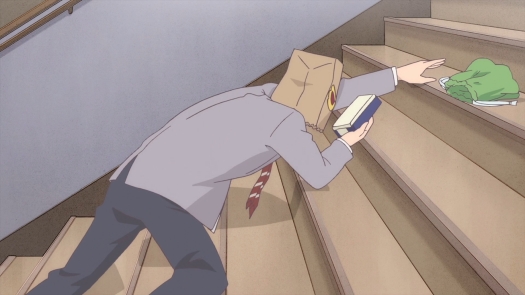 Eventually, Kotaro makes his way up a flight of stairs, but when some kids bump into him, he drops his brother’s lunch. Thankfully, Inui is able to carry out his mission.

What did we learn today? That if a toddler wants to go on his first errand for his dear oniichan, you better let him do it. Also, I need to go get lunch.

5 Replies to “Gakuen Babysitters Ep. 6: The importance of video games and a man’s first errand”