We all knew someone important had to die to spur Theo into action. I just wish Villar had gone down in a much more respectable fashion. Read on to see what I mean.

— Marrine has enlisted the help of the Nords, so there goes Altirk’s advantage at sea. This new character even refers to Marrine as her “Big Sis.” Are they actually related or is this just an honorary title? More importantly, does it even matter? Only a handful of characters seem to have a recurring role to play in this story. Hell, what ever happened to Siluca’s friend Aishela? Or Priestess Priscilla? Anyways, my point is that we shouldn’t let ourselves get attached to any of these characters. Unless it’s Theo or Siluca, they won’t stick around for long.

— Look at these Viking-esque bois.

— I don’t think he’s stupid. Certainly, he must have known that this was coming when he decided against heeding Siluca’s advice. I guess I just don’t understand why Villar wants to die so badly. I know he’s got major baggage, but enough to suddenly throw his life away? He keeps insisting that Marrine is simply more formidable than he had expected, but I don’t buy it. All of his decisions since the conference have been self-destructive, but the adaptation is so rushed, I can’t get a good feel of his mindset. 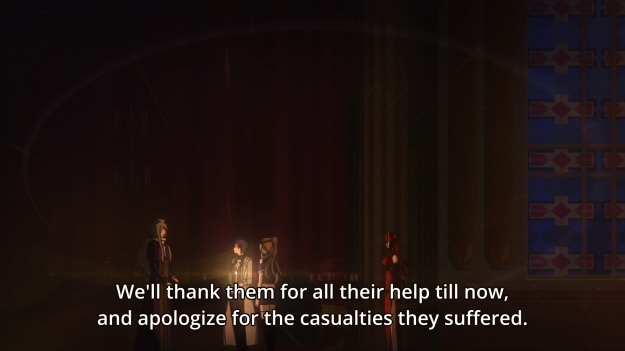 — Plus, is the rest of Union really just going to leave Villar out to dry? They won’t even mount a token resistance to help a major ally? Pursuing peace doesn’t mean you can’t resist the enemy.

— Then for some reason, I get to watch this lady dismiss a young man from her bedroom only for her to make out with another dude. I guess she has a harem. There are only two types of kisses in anime: 1) the innocent type and 2) the sloppy, all-tongue wrestlemania. Ugh.

— She, too, will have flee. She tries to protest, but they knock her unconscious. Meanwhile, her manservants will all stay behind to die in battle. Again, their complete disregard for their own lives strikes me as foolish, but eh… what do I know? I’m not a soldier nor will I ever be one. The only thing is that I don’t even know who these guys are. They were only just introduced last week. The sad music is playing the background, but all I can do is shrug my shoulders.

— A love that can only be consummated after both parties have given up. How pitiable.

— It turns out Altirk’s big mirror weapon is useless at night. I suspected that last week, but I thought to myself, “They can’t be that stupid. They wouldn’t actually rely on a weapon that can only work when the sun is out.” Welp, they are that stupid. 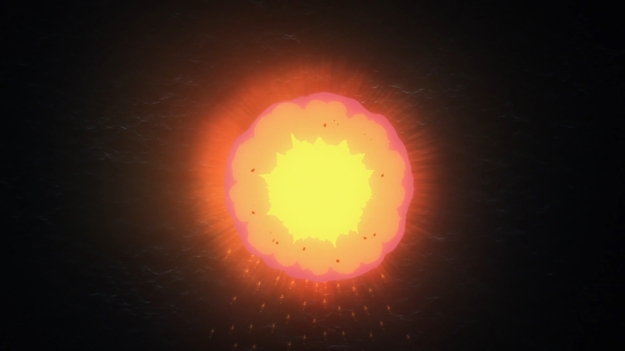 — In any case, we get to see some naval combat with big explosions, but meh… again, I’m here for the character drama, not the actual warfare. I wonder what Theo and Siluca are up to, but I bet they won’t get any major attention in this week’s episode. I just really wanna see someone off Milza. Marrine going down as well would just be icing on the cake.

— This dork thinks Marrine will stop after taking out Altirk. It’s just like how Hitler decided he had had enough once he invaded Poland. I want to sympathize with Alexis, but he’s such a weak and naive leader. He wants to save Altirk by proposing that Union simply surrenders to Alliance. That’s so dumb, I don’t feel as though I even need to say why. I’d just be stating the obvious.

— According to Alexis, they must save Villar at all costs. Uh, if you truly believed that, you wouldn’t be holding this meeting at the 11th hour. I’ve really lost any ounce of respect I might have had for this guy.

— More battle scenes follow as Marrine’s army is right outside the castle gates. It’s all but over for Villar. We just have to sit through the next ten or so minutes.

— It’s odd that Villar is still commanding his men to defend the castle. He knows that his defeat is inevitable, so why not tell them to flee? Would they not flee? Or does he not really care about their lives? Man, I don’t even know… 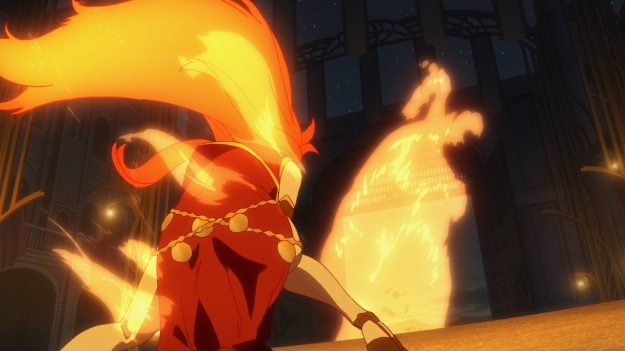 — Margaret douses herself in a liquid and turns herself into the living embodiment of fire. Too bad we’re only seeing this now. Too bad her badass moment is also her final one.

— Meanwhile, Villar butchers countless soldiers while droning on and on about how much he loves Margaret. Nobody gives a shit about the lower classes in this anime. The guy knows he’s going to lose, and yet, he insists on taking people down with him. But what’s the point? He won’t kill some important general. He won’t take out a greedy noble. Nope, he’ll go to all this effort just to murder faceless soldiers. Why do we care so much about lords in this anime and give almost no attention whatsoever to the people forced to obey them? It’s like watching one of those musou games in action, but the tone is deathly serious. Plus, I never liked musou games anyway.

— The nobility hoard all the crests to themselves and use it to subjugate others. Equality is impossible when owning a crest means you can take down an entire army by yourself. So what should do? Should we divide the crests up equally so that no one is inherently superior to anyone else? Or do we entrust everything to a God-King and hope that he is benevolent? This is fiction, so naturally, Theo doesn’t have an ounce of evil within him. But honestly, this sort of hero worship is kinda sick.

— On a slightly related note, I like that Caim is portrayed as a murderous bastard in Drakengard. It’s one of the many ways that Yoko Taro manages to subvert our love for this trope.

— Margaret is near exhaustion, so she pushes Villar away in order to sacrifice herself. Like a flame that flickers wildly before going out, she explodes violently. All that’s left is a shadow of herself in the form of white ash. It then disintegrates in the wind. Fucking Villar, man. This hero worship is sick. The guy is noble enough to make believe and fall in love with him, so what does he do? Make terrible decisions after terrible decisions, thereby forcing his subjects to die for him. This earl is a fool.

— He then runs headfirst through Margaret’s fire to kill more people. Great.

— After murdering hundreds (if not thousands) of soldiers, he stops right before Marrine and they embrace. He then gives her his crest and tells her that he still hopes she will wed Alexis one day. Finally, Villar dies. Pfft. He deserves nothing. Marrine deserves nothing. All of these people are horrible, and I hope that the people will eventually overthrow every single one of these lords. I know that won’t happen, though. Sadly, I’m supposed to believe in Theo.

— On the other hand, Alexis kinda sucks, so it’s not exactly a happy ending if Marrine does end up with him.

— Shouldn’t Villar have given his crest to someone else? Then again, he kept saying how Theo continued to surprise him, so I can only reasonably imagine that he never truly believed in Theo’s greatness in the first place.

— Even with Villar’s death, the battle continues because everyone’s dumb.

— All we get to see from Theo is his shocked, pained expression, but he never interacted with Villar enough for me to believe that those two shared a close relationship. But more importantly, he needs to stop screwing around. Theo’s been passive since the start of the anime, and it hasn’t gotten any better under Villar.

— One of Villar’s mages commits suicide via poison. The other one, however, begs to continue treating the wounded. The one manning the giant mirror was probably killed by the bloodthirsty axe girl. Add her to the pile, too. She can go down with the rest of them.

— Marrine then gives Villar’s crest to Milza who gloats to an empty throne room. Fucking great. God, I don’t like this anime at all, but I want to watch it long enough just for someone to take that guy down. I don’t even care if it isn’t Theo. Honestly, I don’t care for Theo all that much. I just wanna see someone take Milza down. He doesn’t have to die. In fact, he’ll probably suffer more humiliation in a jail cell. To these egotistical lords, there are fates worse than death, and that’s precisely why Villar decided to go out in battle instead of simply running away. All they care about is their pride. Everyone else gets to suffer.

— Ahahaha, next week’s episode is going to be a recap episode. Welp, at least I won’t have to torture myself next Friday.