Here comes yet another romance anime that feels all too familiar. So far, it’s nothing special, but if I have to grade on a curve, I gotta admit that I enjoyed this first episode a hell of a lot more than what I got from 3D Kanojo Real Girl. That’s not saying much, though. Still, let’s introduce our power couple. First up, our boy Mitsuyoshi doesn’t really have much of a personality… yet. All that we know about him for now is that he likes photography but dislikes going on airplanes. Still, a lack of a distinctive personality is still better than having an asshole personality… maybe. Plus, Mitsuyoshi is necessarily lowkey and grounded in order to contrast his co-star Teresa, the the love interest.

Speaking of which, our heroine is so beautiful that people just can’t help but stare at her, but at the same time, she’s a bit too quirky for my tastes. She’s cheerful but a bit empty-headed. She’s got personality, but I find her obsession with some samurai-themed TV show a touch too unbelievable for my tastes. Hell, Teresa claims that she learned Japanese just from watching the show alone (no way!). More than anything, the show feels like a retread, especially when Teresa ends up transferring into Mitsuyoshi’s class by the end of the episode. Like c’mon, that’s the oldest trope in the goddamn anime book. What’s next? You’re gonna make her a princes–… sigh…

— Mitsuyoshi first bumps into Teresa when he tries to take pictures of cherry blossoms, but the girl kept getting in the way.

— She eventually asks him to take a picture of her with her camera, but he acted as though he couldn’t understand her. I’m instantly reminded of this comedy sketch.

— I’ve never ever seen a cat with a tuft of hair on its forehead.

— It turns out Teresa’s camera is out of battery, and she thought the flashing battery icon meant that the device had full power. She’s a bit of an airhead, isn’t she?

— Mitsuyoshi suggests that he put her memory card into his camera, snap a shot of her, then give her the memory card back. The girl then quickly departs without said memory card. Yep, she’s an airhead. Nice… but dumb.

— Afterwards, the guy bumps into the girl again. She sees a sluice gate which reminds her of a secret passage way that the Rainbow Samurai had used on a TV show, so she tries to climb over the railing and into the water… man, she’s so dumb.

— Cute cat. Better than the one in the OP, anyway.

— Again, the guy bumps into her. It has begun to rain, but the girl did not come prepared with an umbrella. D-… nah, I’m not gonna beat a dead horse.

— So Mitsuyoshi invites the girl back to his grandfather’s coffee shop. His act of generosity reminds her of the Rainbow Samurai yet again. This girl is too unbelievable. It feels like she’s yet another manic pixie dream girl.

— Of course, the main character has an imouto.

— At the coffee shop, everyone is captivated by the girl’s beauty. Even the cat’s impressed.

— The girl initially introduces herself as “Teresa Du-,” but she quickly cuts herself off. We’re going with Teresa Wagner for now. Odd, but I guess this is a future plot point. She’s probably hiding her last name, because she comes from a super important family. But in this day and age, her family can only be important if she’s like… royalty or something. Aw man, don’t tell me she’s a goddamn European princess.

— When the girl goes upstairs to change out of her wet clothes, she notices an altar. It appears that our hero’s parents have died. Hm.

— I really do appreciate all the minor details littered throughout these scenes. The animation is not technically impressive or anything, but the backgrounds are jam-packed with knick-knacks (like this cat-shaped chore chart). It gives the show much needed personality. Likewise, the show’s characters are far from original, but they do bring a lot of energy and thus charm to the story. Basically, the premise feels overused and tired, but Doga Kobo’s execution is preventing the anime from feeling completely forgettable. 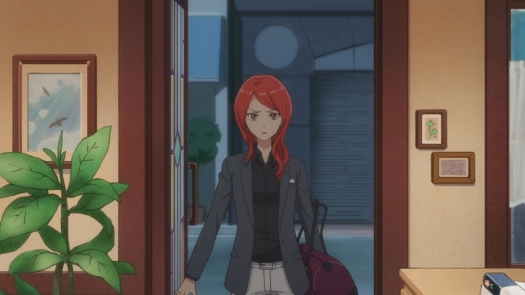 — Finally, Teresa’s friend shows up. Alexandra, or Alec for short, takes one look at the room and immediately attacks Kaoru. Odd. She’s acting like a bodyguard… yep, Teresa’s a goddamn princess, huh?

— Again, I’m paying more attention to the knick-knacks in the background than the characters. Hell, these jars of coffee beans even remind me of Persona 5’s Leblanc. Sometimes, however, there’s too much detail.

— For some odd reason, the subs keep referring to Luxembourg as “Larsenburg.”

— So everyone teases Mitsuyoshi for the fact that he doesn’t like airplanes. Of course, I can’t help but wonder if his parents died in a plane crash. More problematically, however, is the fact that the show’s title translates to “Tada Never Falls In Love.” Considering how the main character feels a bit uptight, and factoring in the potential tearjerking drama of his parents’ cause of death, it really does feel as though Teresa’s job is to coax Mitsuyoshi out of his shell. In other words, she’s the manic pixie dream girl who exists only to teach the guy how to live and appreciate life. We’ll see how the rest of the series unfold, but so far, the premise feels extremely tired. The show will really have to lean heavily on its execution now.

— Afterwards, Teresa and Alec finally get the chance to talk by themselves. As if we hadn’t already guessed, the latter says, “Please get your act together. Someday, you’ll be…” We don’t get to hear the rest of her sentence because a truck suddenly drives by, but c’mon, there’s really no point in beating around the bush anymore. At this point, the story wants us to know the truth about Teresa.

— Mitsuyoshi bumps into the girl again. God, why don’t you guys just get married already?

— Even their map has to be quirky.

— For the time being, Teresa will be staying at the Grand Palace Ginza… which is right next to the coffee shop. So essentially, she and Mitsuyoshi are neighbors. Well, at least they’re not childhood friends… yet.

— Speaking of childhood friends, however, this girl might be one. We’ll find out more about her in next week’s episode, I imagine.

— And of course, Teresa ends up transferring into Mitsuyoshi’s class. I mean, what European royalty wouldn’t send their precious daughter to some generic-ass Japanese high school?