God, I miss the Ogre Battle series. I still hum “Thunder” from March of the Black Queen from time to time. I wish this anime was that fun. Anyways…

— Rossini is concerned that uprisings are breaking out across the island of Sistina, but one of his sons says, “What good will it do for people to make a commotion? They all fear us.” Um, if they feared you, there wouldn’t be uprisings.

— In fact, it’s quite odd that none of them seem all that worked up about Salvador’s death. Losing one son’s okay, but two? Whew, that’s too much!

— These guys are hilarious. Gee, all we’ve ever known is subjugating people, so we may as well keep doing it!

— Elsewhere, Yana, the black witch, is hanging out with Salvador’s assassin. Even though the young lord is dead, the assassin won’t abandon his mission of killing Irvin. This is kinda dumb, honestly. No one has any brains, and that includes the black witch. She’s only joining forces with him because she wants to pick a fight with the loli werewolves. As an aside, those two wannabe maids will always be a stain on this anime. It so desperately wants to be taken seriously, but then you have loli werewolf maids.

— Yana: “Just looking at [Theo and Siluca], you can tell that they trust each other!” Ugh, the nerve! The black witch even dry heaves at the thought of those two. Still, it’s a little early in the day to do the ahegao face. 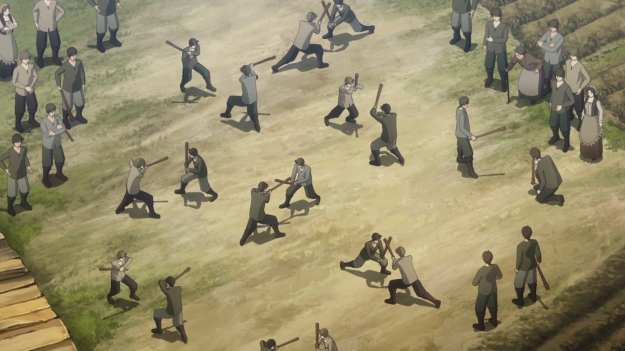 — Look at all these insurgents. Theo is nothing more than a terrorist! He just hates the Rossinis’ freedom!

— Theo has grand plans for the future. He’s going to build a tiny castle and rule over a small village. Big dreamer, that boy. But first things first, he has to beat down Dorni, one of Rossini’s sons. So you know what that means. Yep, more crappy CG armies standing in rectangular formations. I love how incredibly uniform that battlefield looks.

— Sure enough, Irvin and the loli werewolves are lured away from the main party because they’d rather pursue a bunch of side enemies than actually win the war.

— Meanwhile, Dorni does that thing that makes his soldier extremely cruel. But aside from the show directly telling us what his Crest does, we never actually get to see it in action. I mean, nobody appears to be more cruel to me.

— This eyecatch is just some lazy filter slapped onto an image.

— Irvin gets to fight his foe head-on. Unfortunately, the loli werewolves are up against some kinda goat demon. We’ve gotten 14 episodes that have mostly focused on war and politics (poorly). As a result, we still know next to nothing about how magic and demons operate in this universe. The world-building has been piss-poor in general. Like I said before, I’m just here to see Milza lose to Theo.

— I guess Theo can’t afford a horse. So instead, he kills Dorni’s horse. Man…

— Irvin manages to slay his opponent, but he still gets cut by a poisoned blade. But will he actually die? There’s no tragic element to his story like, say, Villar, so I doubt it. But I wouldn’t care if he died. He barely has a personality, and has contributed relatively little to the story. 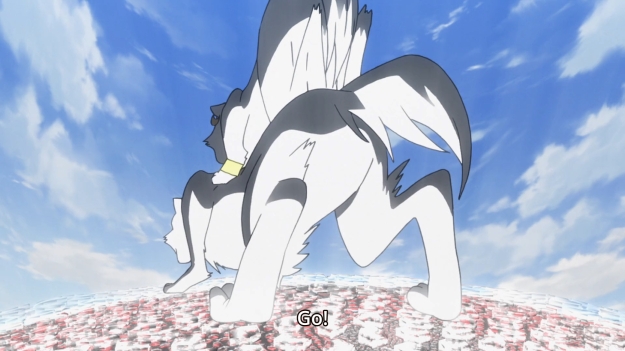 — Elsewhere, the loli werewolves drive Yana away by simply stacking themselves one on top of the other… haha, really? Anyways, it’s unfortunate that they couldn’t finish her off, ’cause this just means she’ll rear her ugly face again at some point in the future. We already have enough villains to deal with between Milza and Marrine. Yana doesn’t really add anything special to the story other than cackling like a generic two-bit bad guy.

— More shoddily animated war scenes follow. You know it’s bad when the “camera” is this close to people’s face. It’s just a way for the animators to avoid having to, well, animate much.

— Eventually, Dorni’s footsoldiers abandon him, and Theo has him on the ropes. But we keep jumping back and forth like we have ADHD, so we’re right back to Irvin. He’s about to die when Priscilla shows up just in the nick of time. She looks strangely cold and emotionless for a priestess. Plus, this is all that she gets to do in this week’s episode. She literally shows up to heal Irvin then fucks off.

— Great animation. Outside of Darling in the FranXX (which is a joint effort with Trigger), all of A-1 Pictures’ efforts recently have looked terrible. SAO Alternative’s first episode didn’t look so hot, Wotakoi’s first episode just looks downright awful, and Grancrest Senki has been disappointing us for over three months now. I guess Persona 5 has looked alright so far. Still, for such a reputable company, I just expect more.

— Theo still does that nonsense where he won’t fight back against his opponents until they make a grave mistake. He just defends until they wear themselves out. But that has already failed once against Milza. Does he really intend to rely upon it for the rest of the series?

— Look at them all bunched up in that pit. Man, if only someone had brought some longbows and trebuchets. 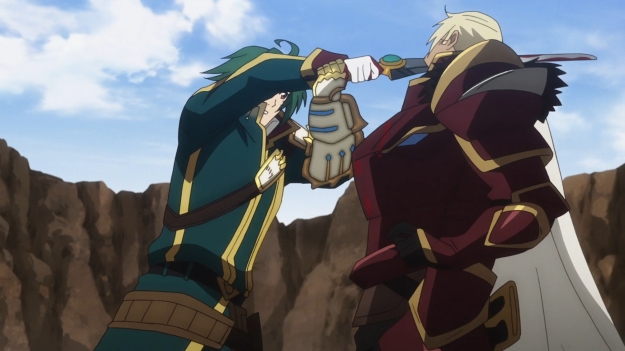 — This was the best angle that the animators could draw? Really?

— All of a sudden, Yana has magically recovered from her injuries, and she’s now about to nuke our heroes. She was literally coughing up blood earlier, so what gives?

— Hmm. I have no words for this shot either.

— Siluca is able to repel Yana’s attack without issues. I think we’ve only gotten like a couple throwaway lines about how she and Theo have been training and leveling up. Oh well.

— Juzel, the remaining Rossini son, wants to negotiate and convince Theo that he’ll treat the people well. Unfortunately, the very first goddamn condition out of Juzel’s mouth is that he and his supporters don’t lose their fortunes. Oh, you mean the fortunes that you guys got by overtaxing the people?!

Juzel: “Lemme pledge my allegiance to you, and I’ll keep the loyalists in line!”
Theo: “The people who joined my revolution wouldn’t be happy with that!”
Juzel: “…”
Theo: “But I don’t wanna kill you guys… so pledge your allegiance to me!”
Juzel: “…uh, okay?”

But what’s done is done, and Theo has liberated his homeland in just two short episodes.

— And all it cost him was a childhood friend! 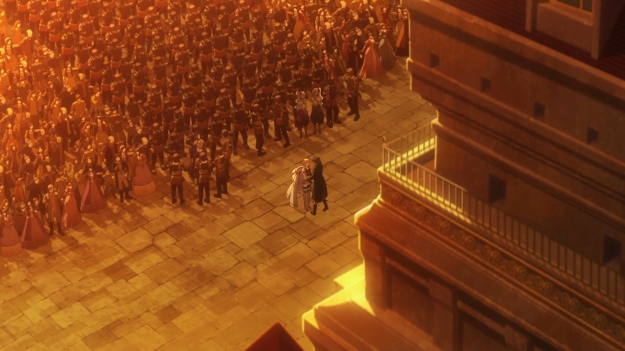 — The only bit of interesting characterization in this week’s episode involves Siluca and mainly Siluca. After Theo brutally takes downs Dorni, the mage runs up to him with a look of concern. Is it possible that all this relentless warfare and murder has tainted her man? She is even more worried when it initially looks as though Theo has no mercy for Juzel. Luckily, he eventually relents, so she smiles with tears in her eyes. They cap this episode off with an embrace before an army in jubilation. It’s not great character development, but it’s something nonetheless. I still maintain that Siluca’s relationship with Theo is the best thing that this show has going for it.