I hope you’re ready to learn the ins and outs of this awesome tournament.

— Battle royales are so hot nowadays. I’ve never tried them, though. I don’t see the appeal, and it’s not worth downloading gigs and gigs just to give them a shot. Sure, I might be missing out. After all, I never would’ve tried MOBAs if my ex didn’t rope me into playing League of Legends. Still, I don’t think I’m gonna lose any sleep over passing up Fortnite or whatever.

— Pito supposedly participated in the last “Bullet of Bullets” tournament. She was eliminated early, though. That’s probably a good thing. She might have fallen in love with Kirito too if she had bumped into him.

— Some novelist in his 50s came up with the battle royale concept for GGO. Okay. Good to know, I guess.

— I think what has always kinda annoyed me about every single SAO series is that they often have such bland environments. In fact, GGO is one of the ugliest MMOs I’ve ever seen.

— Karen gets to have a smaller body, but her avatar’s head is the same size as Pito’s head. It just looks weird.

— Pito doesn’t really explain why she wants Karen to sign up for the next Squad Jam so badly. She even insists on Karen’s team being limited to just two people. Why can’t they recruit a few more helpful hands? Pito can’t even participate, so what exactly is she after? What’s in this for her? Maybe I’m being a little paranoid, but I just find this a bit odd.

— The girl has long suspected that Karen is insecure about something in real life, but it’s okay! After all, she has issues of her own too, and that’s why she “escapes” to MMOs. It’s odd, isn’t it? Not that they have issues, but that they all have issues. I think most people got into the initial SAO — not the show but the actual game — because they were simply fans of VRMMOs. Ever since Sinon, however, every new character has some sort of serious issue that compels them to play an MMO all day, everyday. There was that terminally ill girl that Asuna befriended, then we have Karen and Pito. Will we ever get a protagonist who simply plays for fun?

— Wait, didn’t Kirito feel like his aunt weren’t his real family or some shit? Ah, I forget… 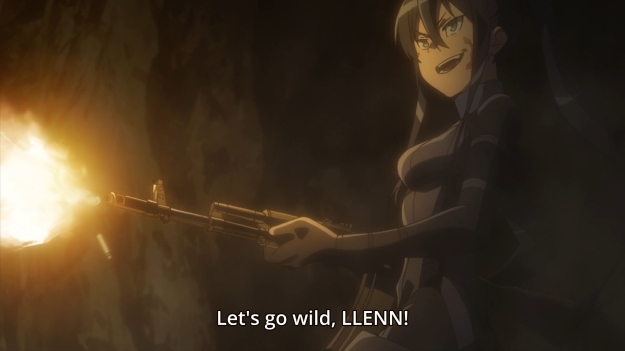 — Pito: “I’m saying whatever we can’t do in reality, let’s take them to the extreme here!” I think that’s a problem with a lot of the villains… In fact, I get the impression that this girl is kinda unhinged. She’s a bit bossy with Karen, and the way she just goes off with her gun sets off a few flags.

— Oh? Karen even went and bought a toy gun to decorate her room?

— If I were in Karen’s shoes, I would’ve just said no right from the start. Like her, I don’t like teaming up with strangers.

— She also has a P90-shaped keychain! That’s some real dedication.

— Hmm, the tournament is held at the same time as Elsa Kanzaki’s concert. Also, Pito can’t attend because she has to go to her best friend’s wedding. Sure, sure…

— In general, GGO is very brown.

— Why does Karen have to depend on getting the tickets in order to turn Pito down? Just say no. I guess that’s easy for me to say, though. The girl sadly has no confidence, but maybe if she guns down enough people in the upcoming Squad Jam, she’ll just magically fix herself.

— Oh come on, don’t start going over the rules. No more exposition, please. No… no… nooooooo!

— Welp, Pito’s going to go over the “important points” even though Karen already read up on the tournament. I’ll see you guys in a bit.

— Karen’s avatar is incredibly unfair. Her hitbox is so small, so combined with her agility, she’s super hard to kill. People will naturally underestimate her, so she’ll have the surprise factor when going up against them. Making her the leader might make strategic sense on that front. Since the satellite scan only reveals the location of each team’s leader, you’d want your leader to be someone that’s hard to bring down.

— If this is how M looks in the game, he’s probably some heartthrob in real life. And Pito in real life is probably the short, cute girl that Karen has always dreamed of being. I’d put my money on it. Well, that’s even assuming Pito is a girl. Say… has any major SAO character ever turned out to be a member of the opposite sex in real life? So far, girls have been girls, and guys have been guys, right?

— Not that it matters, but why a pineapple? Also, I’m firmly in the pineapple-on-pizza camp.

— Y’know, the only people I’ve met in real life who cares this much about battle tactics like M are gigantic nerds. Nothing against nerds, because I’m one myself. I’m just saying…

— Frankly, I have no interest in guns, so all this talk about them just goes in one ear and out the other. Unfortunately, I sit next to a gun fanatic at work. We don’t talk. Speaking of which, he’s also a PUBG fan… he might even like this anime.

— Take a close look at this girl. It’s probably Pito. There’s no way Elsa Kan-whatever would be so goddamn important to this story if she wasn’t a major player in GGO as well.

— Karen writes a fan letter to Elsa confessing that she hopes to become a more confident person by playing GGO. So like Sinon, she’s using the game as a way to cope with actual psychological issues. Do people ever play MMOs in order to effect actual change on themselves in real life? Maybe some people do.

But I feel like most people — people that have actual issues, that is — tend to retreat to the internet in order to escape further from reality. Even with MMOs, the internet is often little more than an echo chamber. As an aside, this blog is no different; I do this as a hobby, after all. I’m certainly not making any money from the site. Although I’m open to calm criticism and disagreements, if people come at me with an argumentative tone, I’ll check their comment history to see if it’s a pattern. And if it is, I’ll quickly ignore them. I realize that this is somewhat hypocritical since I often relentlessly mock shows that I disagree with, but eh… again, it’s not something that I’ll lose any sleep over.

— The sponsor goes, “Everyone, please get your fill shooting each other in the game.” Sheesh.

— Lots of male avatars getting ready for Squad Jam. I guess it’s rare for the random character generator to create female avatars. Either that or female avatars tend to shy away from tournaments, but that would be odd.

— Well, we’re right back to the start of the series.

— The girl happily fires a gun, but she cringes at the sight of a knife? In fact, she’s never had to melee in PvE?

— Maybe if he had made the knife pink, she would’ve been more receptive to it.

— The guy advises her to target other players’ femoral arteries or Achilles tendon. I’ve never seen a game where you could actually deal that sort of specialized damage to the enemy. At best, head shots will do the most damage, and limbs will take the least damage. I’m not saying it’s impossible for GGO to have this level of detail… I just doubt it.

— Still, the episode just ends here. After way too much exposition, the rest of the episode fails to build to any sort of climax.

— After three whole episodes, Sword Art Online Alternative: Gun Gale Online still lacks a compelling hook. Like, what’s the endgame? What are our characters hoping to achieve beyond just winning a random tournament? Karen’s desire to become a stronger person in real life is also too nebulous of a goal. I’m not saying that the show needs some big, bad villain like the Kirito-focused arcs, but it needs something to work towards.