In this week’s episode, our favorite Black Prince stumbles into one bad situation after the other. I gotta say it couldn’t have happened to a better person.

— From a show with one good boi to another show with multiple good bois, this week’s episode starts with Milza’s men being taken down by a bunch of werewolves. But seriously, did Milza even consider what he was walking into? Did he even stop to consider that he’d be up against werewolves? Probably not. He’s clearly a great warrior, but not much of a tactician. This becomes a recurring theme in this week’s episode, as advantages after advantages continue to pile up in Theo’s favor. Maybe Villar should’ve leaned a little more on his newest lord.

— To make matters even worse, witches (the good kind, supposedly) show up to the battlefield. Up until now, most of the clashes have been soldier-on-soldier. This is a whole new ballgame. Still, I thought chemical warfare was forbidden. Is there some loophole that I’m not aware of? If not, then this isn’t a good look for Theo.

— Milza gets to slay a random nobody, so I’m sure he’s still in good spirits.

— The Black Prince eventually reaches Theo’s castle, so he demands to have a duel. Luckily, this ain’t Dorei-ku so our hero isn’t going to stupidly accept the challenge. He probably can’t win in a straight up 1 versus 1 against Milza anyways. And just like that, the Black Prince withdraws his troops… after all, the forest becomes super dangerous at night or something. So uh, that was kinda anticlimactic. I was expecting at least a small skirmish, and I got nothing. Still, Theo’s troops rejoice because they’re all about good morale.

— This is all about moves and countermoves. Milza knows he has the clear advantage of Theo tries to leave the forest and attack Castle Unicorn. He also knows that Theo wouldn’t do so unless he has a good reason to. As a result, Telius, Milza’s assigned mage, suggests that they send their troops down south to take out Regalia. In doing so, Theo might think that Castle Unicorn is a sitting duck. Nevertheless, Siluca is not that dumb. She will make a countermove, then her rival will try to counter that countermove, so on and so forth. Seeing as how we’re already up to episode 16, I think the odds are in the good guys’ favor.

— Siluca believes that they should strike anyways, and if they do so with the people’s support, they’ll manage to overwhelm Milza. Theo is hesitant to call for yet another volunteer army. He feels guilty about all the people who had to die in order to help him liberate Sistina. But this is what the people want, is it not? Siluca reminds Theo that people naturally want to fight for their homeland. Their morale will remain high precisely because of this. Besides, what other option does he have?

— Now kiss! Give the people what they want!

— I love how the mages just chat on their wands like it’s a cellphone.

— Selge, Villar’s brother, helps Theo out a ton by taking advantage of his bad reputation. To be accurate, it’s really his mage’s plan. Either way, however, Selge plays a big role. Apparently, he’s known for fleeing at the first available opportunity, so Milza doesn’t bat an eye when the earl does it once more. This lures the Black Prince into overcommitting his troops to Regalia when this whole ploy was initially meant to draw Theo out in the first place. Milza reasons that Selge would only bail if he truly had no confidence in Theo. Clearly, that’s not the case. In simpler terms, Milza played himself.

— When Milza returns home, he predictably discovers that Theo has managed to raise a large volunteer army. I mean… it’s kinda his shtick now. To rub salt into the wound even further, Milza left 5000 of his own men behind in Regalia. Nevertheless, he remains overconfident in his own abilities. Telius advises him to call for reinforcements, which is also what Marrine had told him when they last spoke. Nevertheless, Milza is too prideful.

— Honestly, how much longer can Telius endure this nonsense? Milza keeps sticking a blade to his mage’s throat every time he’s pissed off. I would’ve quit this shitty job a long time ago. C’mon, bro. I would love it if this guy just quit and joined Theo’s side. It’d be a such a huge middle finger to Milza. But instead, he calms Milza down enough to convince the Black Prince that reinforcements would be prudent.

— Marrine hears about Milza’s predicament anyways, so she’s willing to lend a hand. Unfortunately, 3000 of her own knights are all that she can spare. Apparently, Theo’s army numbers 50000 strong. Volunteer army or not, that’s a big, fat number.

— Ah, so the girl’s name is Ulrica. I’m sure it’s been said before, but it’s hard for me to remember the name of every single character in such an abridged adaptation. Anyways, Marrine wants the redhead to help Milza out, but if you’ll recall, Ulrica and the Black Prince had a bit of a spat in last week’s episode. As a result, she will continue to prioritize Haman over everything else. After all, she intends to install her own father as emperor. Marrine doesn’t have very many allies to begin with, and they’re not exactly reliable. Milza is filled to the brim with hubris, and Ulrica never really believed in her to begin with.

— The major problem with this week’s episode, however, is that it features a lot of exposition… a whole lot of exposition. And you usually just have people talking in pairs. Milza and his mage. Marrine and her mage. Ulrica and her mage. And now? Eudokia and her mage. It just continues ad nauseum. It’s not the most engaging episode, and that’s putting it lightly. Basically, Eudokia feels as though Haman will soon fall to the Nords, but a potential slave revolt — led by none other than Juzel Rossini — might flip the war completely on its head. At the very least, it’ll keep Ulrica tied up long enough for Theo to take care of business with Milza.

— Wait, what? In order to drum up support and improve morale, Eudokia has to get buck naked in front of her own people? This wouldn’t even be a thing with a male ruler.

— Gee, that’ll makes it all better!

— Jesus Christ. No, seriously, baby Jesus must be crying somewhere.

— So then the entire army decides to strip too! We’re all in this together!

— Hey, wait a minute, y’all still got pants on!

— Guys, the speech is over. You can put your clothes back on now. 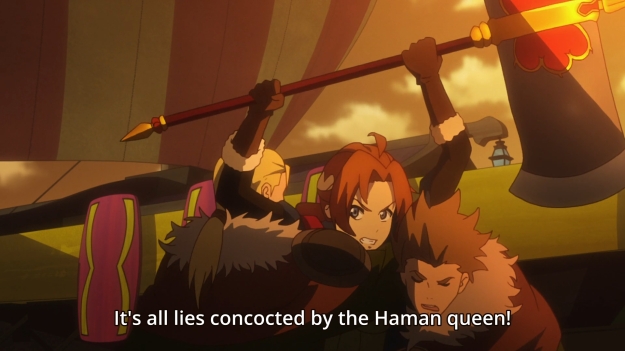 — And just like that, the slaves all turn on the Nords. The situation becomes too dangerous for Ulrica, and her men have to force her to withdraw. There wasn’t even a battle. This is so ridiculous.

— Milza starts to realize that he’s in dire straits. Not only can’t they get in contact with either Dartania or Ulrica, Theo has managed to setup a stronghold. Even if Marrine’s knights can get here in time, they can’t exactly group up with Milza. As the cherry on top, Lassic has also arrived. Things are moving real fast. Our hero might flip Castle Unicorn in just an episode or two. If that’s the case, then what? He’ll have to go after Marrine, but I can’t imagine her holding out very long without Milza.

3 thoughts on “Record of Grancrest War Ep. 16: Played like a fiddle”