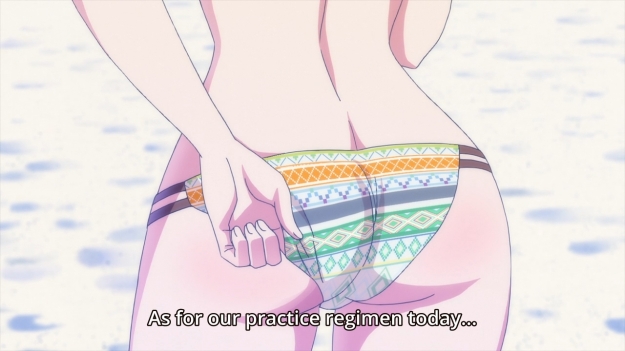 So it looks like every episode is going to follow the same formula. First, bombard the viewers with copious amounts of fanservice. Then follow that up with a volleyball match that uses a lot of slow motion. Last but not least, we wrap the episode up with some fairly lightweight drama. Once again, Kanata has an insecurity to overcome. Once again, Haruka shows her cousin the way by being her usual super genki self. Hanebado!‘s drama might be a bit cloying, but Harukana Receive is almost too watered down by comparison. Ah well, at least the girls are hot?

— No anime is complete without high school, so we see Haruka visiting the faculty office to finish up some paperwork. It’s not that we care about education. Nah. We just want a piece of that juicy after school club action.

— Enter Emily and Claire Thomas, two blonde twins eager to recruit Haruka and Kanata to their Beach Volleyball Club. We can call them Eclair for short. And as you might expect, Kanata looks absolutely thrilled to join the club.

— The thing is… I’m used to beach volleyball swimsuits looking like this, and not these sexy tie bikinis.

— The four girls soon decide to do a quick match for funsies. Kinda. Naturally, the HaruKana duo are losing badly again. After all, this is only their second match as a team. Haruka has a lot of spirit, but that’s pretty much all she really has going for her right now.

— The physics are really terrible in this episode. For some reason, everything is really floaty.

— At one point, Emily uses a move called a “pokey.” It’s like a change-up, I guess. In the middle of this explanation, however, we bizarrely cut to Claire gushing over her own swimsuit. Um, okay.

— Midway through the episode, Harukana Receive finally decides to trot out the drama. Emily is taking this match semi-seriously, because she actually wants to be good at the game. As a result, she’s annoyed at Kanata’s refusal to also use the pokey. Emily has a point, though. If you’re losing this badly, maybe it’s time to re-examine your strategy. Unfortunately, the short girl just wants to spike everything.

— So what’s Kanata’s problem? She used to be a power player, so she wants to get back to that level. She wants to hit the ball hard. She wants to spike it, because that used to be her signature style. Once again, her issues stem from her insecurities. In last week’s episode, she was too scared to receive the ball because she’s smaller than everyone on the court. Well, now she doesn’t want to do the pokey because it reminds her that she’s too short. Goddamn, girl!

— I mean, sure, she must feel frustrated that she used to be tall and now she’s not. For some reason, she never got her growth spurt. But athletes add new moves to their arsenals all the time. When Kobe Bryant lost his speed advantage over the years, what did he do? He started playing in the post. Lebron James should do the same goddamn thing. When defenders in baseball start overshifting, what should you do to counter it as a batter? You stop trying to pull everything you hit. Good athletes swallow their pride and pick up new skills. Stubborn ones flame out.

— Luckily, Kanata has Haruka, the newbie. The newbie has no pride. She just wants to be a sponge. Monkey see, monkey do. After watching the Eclair duo school her and Kanata with the pokey over and over, she wants to use the same move on them too:

— So right now, Kanata is getting all of the major character development. Haruka is little more than her muse. She gets excited, but that’s about it. I mean, other than her infectious energy, Haruka doesn’t really have much else going for her as a character. She’s good at picking up new things in volleyball, but she’s not really interesting by herself. This is kinda like the Kanata Show featuring Haruka as the sidekick. Maybe she’ll come into her own in later episodes, but certainly not at the moment.

— But yeah, Kanata eventually swallows her pride and uses the pokey. Sure, the ball landed out of bounds, but the first step is admitting that you have a problem. Wait a minute…

— After the friendly match, Eclair tells HaruKana all about an upcoming volleyball tournament. Everyone is eager to sign up. They’ll no doubt run into Narumi and Ayase, I’m sure. In fact, those two will probably be the final boss at this rate.

— Then to wrap the episode up, the story gives us a bunch of flashbacks. First, a flashback about the first time Kanata met the Eclair twins. Even back then, they were busty…? C’mon.

— And afterwards, a flashback about how she first met Narumi. Ooh, she’s so cool and tall. I wanna befriend that cool and tall chick! How do I do it, mommy! Then her mom suggested volleyball. No, really, that’s it.

— Kanata and Narumi also promised each other that they would become national champions, but… well, we all know how that went. 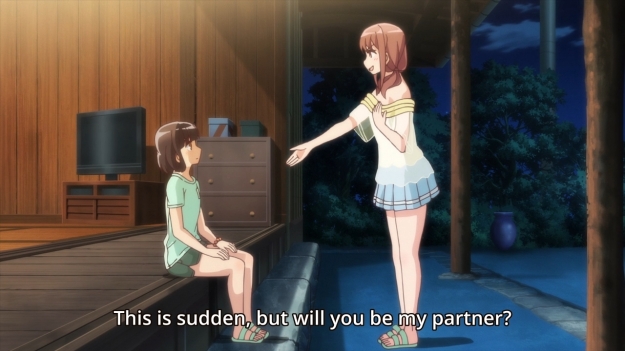 — But hey, life is all about second chances! Kanata also traded Narumi in for the bigger, taller, genki-er model!

— That’s it for our third episode. Harukana Receive is playing it safe. If we want to put this into sports terms, the show has a high floor, but a low ceiling. There’s relatively little chance that the anime ends up becoming anything special, because it refuses to really put itself out there. Sure, it can fail, but it can’t fail spectacularly. So far, the only character with any reasonable amount of development is Kanata, and even then, her issues are already kinda repeating themselves. I’m short, so I can’t do this. I’m short, so I can’t do that.

— But to be fair, Harukana Receive isn’t really doing anything bad either. The plot is safe but inoffensive. The characters don’t bring anything new to the table, but their chemistry is fine. In other words, safe but inoffensive. This is even true of the fanservice! Sure, the amount of T&A in every episode is abundant, but it’s just inert eye candy. No one’s falling into anyone’s crotches “accidentally” in this anime (thank god). To put it bluntly, Harukana Receive is a forgettable Friday night time-waster. Nothing wrong with that if you’re okay with mediocrity.

20 thoughts on “Harukana Receive Ep. 3: Do the hokey pokey”