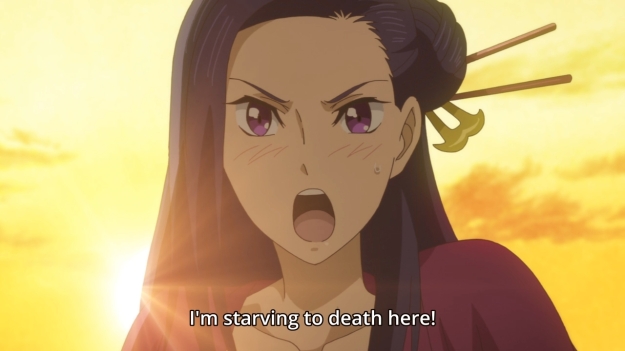 Unfortunately, everyone in the south appears to be jerks.

— As you might expect, Yodoka, the haughty woman, initially cops an attitude. She claims that she wants to eat interesting food, but she doesn’t like the fact that she has to 1) make it herself and 2) eat peasant food. But you know how it is. Everyone has to be a jerk so that Aoi can win them over with food. Kakuriyo no Yadomeshi has no clue how to generate any other sort of conflict unless it revolves around appeasing jerks with food. Psst, remember the main conflict of this arc? The oh-so-terrible curse that plagues the south? Guess what? We’re also going to solve it with food.

— The cranes have to show her how to eat. C’mon. Durr, please use this utensil and plate.

— Needless to say, Yodoka finds it delicious. They always do. Has Aoi received a single bit of criticism about her food all series long? Nope. It’s a bit unbelievable, actually. Even the best chefs in the world can’t appeal to everyone.

— It’s so good, Yodoka even allows her servant to try the food! Oh, food so good, it transcends classism! Eat your heart out, Marx.

— Unfortunately, this guy starts raising a stink, ’cause it’s his job to be a one-dimensional jerk. Y-y-you’re helping us out with our VIP clients? I don’t care, because one small technicality! Yeah, he gave Aoi permission to serve her food to the guest, but not cook her food in the guest’s room. Ugh, whatever.

— I like how the animation is still crapping itself even scenes that barely have any movement. Aoi’s face looks all lumpy here. Maybe she’s allergic to something she made today.

— I get it. Everyone here hates Tenjin-ya. But it’s just so horribly childish. Aoi has successfully calmed two VIPs down: this haughty lady and Matsuba. The staff at Orio-ya are just cutting off their nose to spite their face.

— Hatori drops by later to assure Aoi that the crane siblings aren’t in trouble. Ranmaru is basically tsundere. He looks and acts tough, but he’s not dumb as his staff. Still dumb, though.

— Why is he still dumb? Because Aoi is important, so it makes no sense to mistreat her. Hatori suspects that Ougon-doji kidnapped Aoi because they need her for the upcoming ceremony. If he’s right — and it really does appear that this is the case — then why treat Aoi like shit? Why risk anything? If they don’t successfully combat the curse, the south is screwed. So it seems incredibly stupid to me for everyone — Ranmaru included — to bully Aoi. What if she had decided to take Odanna’s offer and fuck off back to Tenjin-ya? What if she had broken down from all the mistreatment and just stopped responding to them? 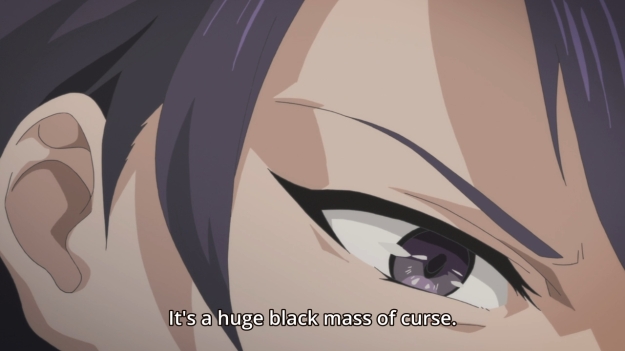 — So what’s the curse? Well, the south is already plagued by natural disasters. The curse, however, is just vaguely bad. And to make the whole thing seem even more ridiculous, they are missing some very crucial details.

— In addition to that, Ranmaru and Ginji are solely responsible for lifting the curse. That’s why Ginji decided to return home to Orio-ya so willingly. This makes Aoi’s attempt to keep him even more silly. What if she had been successful? She would’ve screwed over the south without even bothering to understand why he had to leave Tenjin-ya in the first place. But don’t expect any remorse from the girl.

— Luckily, they’ve at least managed to identify the necessary items for the ceremony. For some odd reason, you need a rainbow umbrella. And guess what? Yodoka has one. She now agrees to part with it in exchange for Aoi’s monjayaki recipe. That’s so stupid. I know I keep using the word “stupid” in this week’s post, but it’s true! Rawr, if I don’t give up this item, the entire south will be destroyed! Thousands of people (if not more) will die! But I don’t care! I’ll only give it up if you make me delicious food! C’mon, what kind of stupid plot is that?

— The next item is the tengu’s secret liquor. Hatori will need to get it from his dad, but once again, the credit here truly belongs to Aoi. She’s been cooking personal meals for Matsuba ever since she got here. Basically, she’s two-for-two; she’s responsible for two out of the five all-important items for the ceremony. We may as well just hail her the savior.

— Hatori then lists off a bunch of other items, but the last one catches my eye. It sounds like you have to cook a bunch of seafood dishes. And hey, our heroine likes to cook! That’s right, we’ll lift this curse by having Aoi whip up a bunch of dishes! Amazing.

— The bird guy tells Aoi that he and the others are trying to negotiate her release, but we all know she’s not leaving without Ginji. Is she in love with the guy? No. I don’t think she’s in love with anyone. For a romance, this series is devoid of it. She’s blushed once or twice, but that’s about it. Aoi has yet to develop feelings for anyone. People want to know if she’ll choose Ginji over Odanna, but I doubt this adaptation will answer that question by the end of the series. You’ll probably have to read the light novels for that nonsense.

— Aoi has an important question to ask Ginji, but that’s not why you would want to bring someone all the way back to Tenjin-ya. If that was all she wanted, she could just write him a damn letter. What Aoi really wants is Ginji to help her run Moonflower.

— Do you think the hidden realm also has eggplant emojis?

— The next day, Odanna wants to take Aoi on a field trip. Since she’s not allowed to leave her designated area, he uses his magic to basically clone her from the combination of her spiritual flower and his ogre flame. No, really. They basically had spiritual sex and created a fully-grown baby out of nowhere.

— The new girl looks exactly like Aoi, and she absolutely adores the both of them. This is like Ann watching a copy of herself cling to Kamoshida in Persona 5.

— At Odanna’s suggestion, Aoi decides to name her knock-off Ai. See? You just knock off the “o” and there you go!

— Even though they acknowledge that Ai has the mentality of a baby, they’re going to leave her in charge while they go on their little romantic excursion. Hilarious.

— It’s A-OK for Aoi to be out and about as long as she wears Odanna’s magical straw hat. So stare at everything with your mouth agape!

— If the poor really has it that bad — and Ranmaru cares so much about the orphans — does it really make sense for him to run a fancy, luxury inn? Just sayin’. All that money that they pour into appeasing their childish clients could actually be used towards helping actual children. What the south needs is a revolution.

— Aoi is fixated with masks, but they’re everywhere. At this point, she’ll never know who that mysterious ayakashi was.

— I almost forgot who this guy was. But yeah, he was the ninja who had protected Aoi from an assassination attempt. Remember that? Someone wanted Aoi dead. But who? That plot thread pretty much went nowhere.

— There’s also a third realm out there somewhere. But we’re already at episode 17, so we ain’t got no time to go there. We’ll just talk about it.

— Odanna promises that he won’t kidnap her back to Tenjin-ya. If she wants to find a way to bring Ginji back with her, then he’ll help her all the way. This makes Aoi all blushy, but we’re not privy to her internal dialogue. As a result, it’s hard to say if she’s finally developing feelings for Odanna or not. She simply tells him that he’s not being fair. He’s being too nice and debonair, I guess.

— It’s also kinda interesting how Odanna doesn’t seem the least bit jealous that Aoi is this fixated on another guy. I guess he’s just confident that Ginji would never do him dirty. Fox dude seems pretty loyal to the ogre, so he would probably avoid stealing Aoi away.

— Still, Odanna is pretty uninteresting as a love interest. Usually, the main bishie is a jerk because he’s an emo mess on the inside. It is thus up to the heroine to solve his problems and teach him how to love. That’s not Odanna, though. He started out like a jerk, but he quickly warms up to Aoi by like… the third or fourth episode. Since then, he’s spoiled her all the way. He has next to no issues of his own to resolve. No conflict, no real flaws, no anything.

— Unfortunately, the romantic and peaceful day on the beach is quickly interrupted by an explosion at Orio-ya. I hope Ai didn’t mess something up!