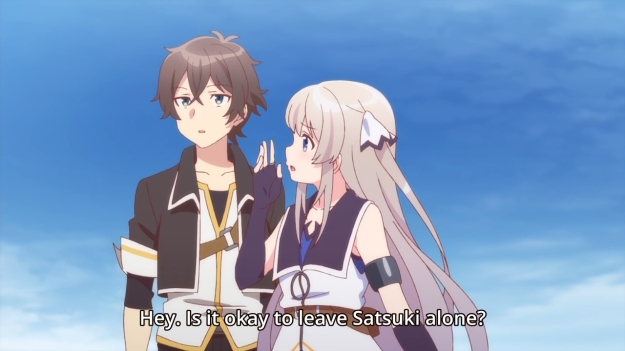 I guess Banana Fish is delayed or something, so we’ll start the day with this show instead. I really don’t want to, but eh…

— Shortly after defeating the big, bad Purgatorio, this red shard falls from Asahi’s collar. What is it? Shrug. But as soon as the girl sees it, she suddenly feels weak and falls to her knees. Before you know it, our trio sees a quick montage of blurry visions. Hooded figures, mysterious characters, and most importantly, a quick glimpse at a facility. This last image doesn’t look like it belongs to any sort of fantasy MMORPG out there. Hmmm. Obviously, Asahi has to be a science experiment gone wrong, right? I mean, we don’t actually believe in ghosts, do we?

— I hate it when stories do these weird transitions. Asahi speculates that she might have just seen what she was up to for the past six years. After the OP, the conversation picks back up again, but our trio has already returned to town. Um, did you guys just shelve the conversation for no reason?

— When they get to the inn, everyone glares at them. Why? ‘Cause nobody believes they could’ve beaten Purgatorio! Really, though? Isn’t that an encounter that was designed six years ago? And no one’s beaten him since?

— It’s kinda funny, actually. The most popular MMORPGs out there are considered “casual.” They’re not casual, because they’re easy. Oh no, don’t make that mistake. At the end of the day, these games make their money by getting you hooked on their Pavlovian design. They’re still giant timesinks. Games like World of Warcraft or Final Fantasy XIV are only considered casual, because it used to be a whole lot worse. Imagine sitting in one place all day just for a rare monster to pop. Imagine killing said rare monster and not getting its even more rare loot to drop! Rinse and repeat. Imagine sitting in town for two hours just to be invited to an EXP party (groups that go out and slay monsters for experience points). Imagine taking hours just to go from one level to the next! If you don’t play a popular class, it could take you months to get to max level. Games like WoW changed that. Oh, it’ll still take you a while to get to max level, but the process no longer feels like a fulltime job. Kinda. 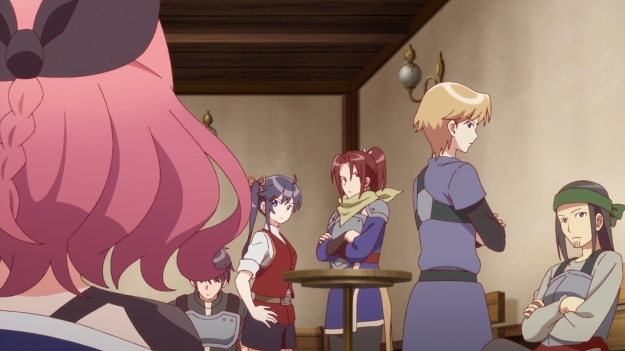 — Why am I bring this up? Again, it’s just funny to me. Popular MMORPGs are casual, but in these stories, they’re almost always super hardcore — unbelievably hardcore. Permadeath! Free-for-all PVP anywhere and anytime! Super rare loot that only one person can ever hope to get their hands on per server! So on and so forth. We like to imagine ourselves playing these games, but in practice, we really don’t. Because at the end of the day, these stories always follow the hero, and the hero gets to have it all. The hero gets all the babes, the hero gets all the sick skills (like dual-wielding!!!), and the hero gets all the invites to the hottest guilds. When you watch a show like Shichisei no Subaru or Sword Art Online, you’re not following some noob-ass guy in mismatched gear trying to do his best to gather 4 sets of werewolf nipples for a shitty sidequest. If these games actually existed, they’d quickly turn into ghost towns. You can bank on that.

— This weird plant thing can apparently collect rumors. Don’t even ask me how that works.

— Our trio can’t believe that news of them beating Purgatorio could’ve circulated so quickly! Someone must be spreading rumors about them, but who!

— Part of growing up is accepting that the old friend group will inevitably splinter. Even the closest friends will find themselves drifting apart 5 cm per second (or so I’m told), and there’s nothing we can do about it. I definitely don’t keep in touch with my high school friends anymore. I don’t even play with my old MMORPG static anymore. Life happens. Most anime refuse to acknowledge this eventuality, though. I’m also getting the feeling that Shichisei no Subaru is going to be the same way. 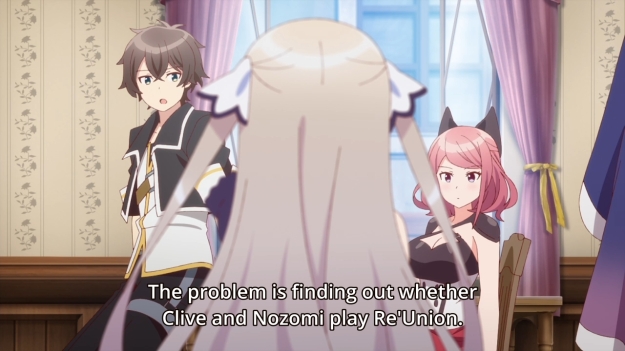 — They need to find Clive and Nozomi, but they don’t know where to start. As a result, Satsuki suggests that they reach to an informant. Really now? An informant. In an MMORPG. I’m just trying to imagine a dude who does nothing but log into the game everyday just to spy and eavesdrop on people. Spying in an actual MMORPG is hard, because people have instances everywhere. But maybe Re’Union is so hardcore that your own guild base isn’t a private instance. Maybe it takes up actual space within the game, so people can actually stare at it (and thus spy on you).

— Unfortunately, most MMORPGs allow you to have private channels of communications in all shapes and sizes. Want to have a private guild chat? Sure! Want to have a private chat with another person? Sure! There’s literally no way to eavesdrop on private conversations unless you hack the game. On the other hand, maybe the game is so hardcore that private conversations are impossible. Again, it’s fun to fantasize about a game like this in fiction, but they wouldn’t be fun at all to actually play. If you force people to openly “air” their conversations to whomever’s nearby, then people will just start using third party VOIP clients like Discord or Skype (I used Ventrillo back in the day).

— I’m going on and on too much about MMOs. I should just focus on the story from here on out.

— Our trio can’t even visit the informant, because Southern Cross, some arrogant guild, is stirring up trouble. And surprise, surprise, they want to get their hands on Asahi. I just don’t even know what that means. It’s a game. What can you do in the game? Force her to do your bidding? In a commercial game?

— Plus, this guy brags that his guild has over a thousand members, and they have our heroes completely surrounded. Could you imagine that raid call? “Um, so I heard this girl is gonna appear at this location at a certain time, so we need to all log on and camp them! Minus 50 DKP if you don’t show up to bully another player!” Over a thousand of them! Holy shit, get a life.

— According to this guy, Asahi and her friends’ mere existence distorts the world! This reminds me of Robin Wright’s character in Blade Runner 2049 freaking out over an android baby: “Am I the only one who can see the fucking sunrise here? This breaks the world, K!” But of course, she had good reasons to believe that. Meanwhile, we’re talking about an MMO…

— But again, Asahi has a one track mind, so she wouldn’t agree to joining any guild anyways. These guys are just wasting their breath.

— It’s been six years! You were in grade school! Go get therapy, dude.

— Cute case, but it’d be pretty hard to fit in a pocket.

— Satsuki must be thrilled to hang out with Haruto in real life. After all, Asahi can’t join them. She can have him all to herself. If she truly wanted to be selfish, she could sabotage their plans to help Asahi. But could Satsuki be that heartless? Probably not.

— I thought they were going to look for leads in the real world, but it turns out Haruto just needs to buy a new rig for all his MMO gaming needs. Does he really need Satsuki’s help for this?

— I also hate how passive aggressive she’s being. She’s initially disappointed that all they’re doing is buying a new gaming system for the guy. But does she tell him this? Of course not. She’d rather just stew in her resentment. Luckily, he invites her out to lunch anyways. Nevertheless, if she wants to date him, she should just say so. It’s the 21st century, girls. It won’t kill you to make the first move.

— Haruto can’t get in touch with Clive, but that’s not surprising. It’s been six years, after all. Meanwhile, Nozomi is just flat out ignoring Satsuki’s messages. Rude.

— The guy then starts talking about Asahi in the middle of the lunch. Oof, bad move. Of course, he has no clue why it’s a bad move. Ah, romantically oblivious heroes and anime. Name a more iconic duo.

— I like how he casually mentions the operating company writing Asahi off as an unregistered character. Um, okay? So? You’re not going to bother investigating the issue?

— Satsuki wonders if they should talk to either the police or Asahi’s parents about this. The guy, however, doesn’t think that either of these actions would be wise. No one would believe them. But what’s the big deal if they don’t? It’s not as if they’ll lose access to the game and thus Asahi if they fail to convince her parents that she’s still alive somehow.

— Needless to say, not everyone’s pulling for the same goal. Satsuki is still conflicted. She’s obviously the third wheel, and she often finds herself lost in thought as the other two talk amongst themselves. Why would she want to help Asahi win Haruto again? Why would she want to help a dead girl steal her man again? Her man. Hah. They’re just kids, but the drama is still ridiculously overwrought.

— Even if Haruto is oblivious when it comes to a woman’s heart, it doesn’t take a genius to be a good friend. Unfortunately, he’s failing pretty hard on that front. It’s not as though Satsuki is hiding her emotions very well. She’s obviously bothered by something, and a good friend would’ve tried to comfort her by now. I’m sure he’ll cheer her up eventually, but I still find this pretty pathetic on his part. He’s not being very considerate. This is true of Asahi as well. Those two are acting as though they’re in their own little world. Neither of them seem to care all that much about Satsuki. All this talk about bringing Subaru back together, but no one even bothers to ask Satsuki how she feels about all of this. In any case, I just can’t help but roll my eyes, because we always get the same basic conflict in all of these generic anime. 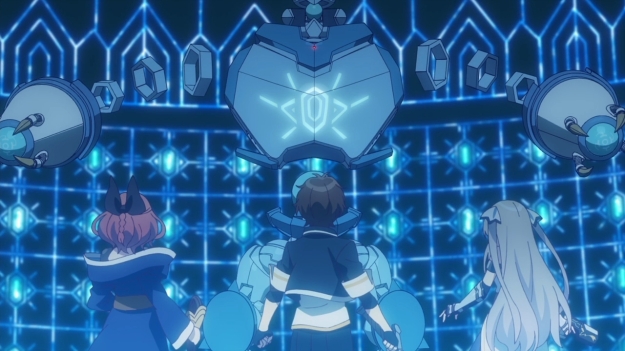 — Just a few minutes left in the episode, so I guess it’s time for some mediocre action scene.

— In the end, the character conflict comes to a head when a minor enemy manages to trip Satsuki up. When Haruto teases her about it, the girl explodes on him. She tells him that he and Asahi should’ve just done this stupid quest by themselves and not even bother with her. Let’s see how emotionally intelligent the guy is. His response to her outburst will say it all.

— He has no response. He just lets her walk off. Nice.

— By climbing some tower, Asahi gets another shard. Welp, looks like we have a collection quest on our hands. Gather all of the shards to unlock Asahi’s memories!

— Unfortunately, Takanori decides to steal this one. He more or less claims it’s dangerous for Asahi to recover her memories. He also believes that only he can protect Asahi. Yeah, yeah, whatever you say, creepo.

— Anyways, it looks like next week’s episode will start off with a duel between two former friends. Since it’s only going to be the fifth episode, I can’t imagine Haruto emerging from this fight victorious. Man, what a mess he’s gotten himself into, all of the guilds are gunning for Asahi. His former friend hates his guts, and last but not least, he’s alienated Satsuki, his only ally besides Asahi. Good going, bro.

4 thoughts on “Shichisei no Subaru Ep. 4: Haruto is an emotional clod”