— Haruka finally gets the chance to introduce herself to her new classmates, but for some reason, they just stare at her with wide eyes. Maybe her Tokyo genki-ness is too outta control for their Okinawan sensibilities. Shrug.

— Haruka’s outward personality quickly attracts potential friends, but when she sees Kanata devote herself wholeheartedly to practicing the pokey, she too decides to put a rain check on her social life. She’s gotta do the hokey pokey too, man… that’s what it’s all about…

— The problem with this show now is that it has almost next to now drama. Ever since Narumi exited stage right, we’ve been kinda running on fumes. Sure, the story will still try its darndest to come up with a conflict-of-the-week for this week’s episode, but the problem ends up being so lame that you can’t help but roll your eyes at it.

— So what’s bugging our heroine this week? She’s disappointed that Kanata keeps referring to her as Haruka-chan and not just Haruka. Really.

— It’s a trust problem, I guess. Kanata doesn’t fully trust Haruka yet. But I don’t think it’s the big deal, and here’s why: Haruka just got here. It’s not like she’s been living in Okinawa all her life. She even admitted it herself that the last time she saw Kanata was years ago. It takes a while to build chemistry. You don’t build a long-lasting friendship in a handful of weeks. 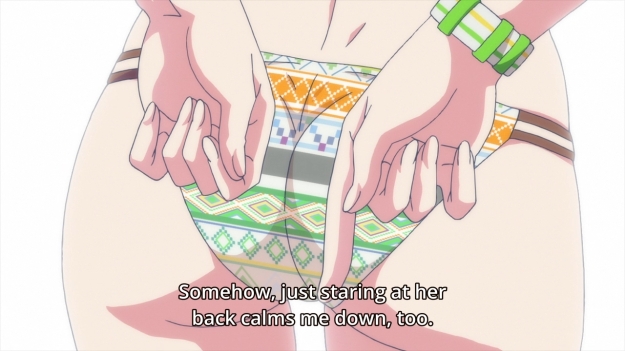 — Funny, this view doesn’t calm me down at all. I’m joking, I’m joking…

— Apparently, this is how a duo typically divvies up their court coverage. But because Kanata can’t rely on Haruka to block balls at the net, their court coverage currently looks like this instead. Again, Haruka freaks out. Oh no, Kanata doesn’t trust me! And again, I think she — and ostensibly the show — is making a mountain out of a molehill. She’s still learning the game, she’s never even practiced blocking shots, she’s never played in an official match, so on and so forth. So chill. Relax. You don’t have to turn into Kerri Walsh by the fourth episode.

— On a somewhat unrelated note, this is why I don’t play doubles in tennis. Trust nobody, man.

— In any case, Haruka now has to practice her blocks. This means she gets to jump up and down repeatedly in her swimsuit, and we can’t call it fanservice. I mean, it still is, but y’know…

— It definitely still is.

— Wait, what? Can I get the instant replay on that?

— But seriously, this week’s episode is putting me to sleep. We’re now watching the girls try on swimsuits. C’mon. Unfortunately, Harukana Receive has become very light on story but heavy on plot. I was low-key worried about this when I initially decided to blog the show every Friday. After the first episode, I had said to myself, “Hey, that wasn’t so bad! I might be able to milk this (no pun intended) for some decent characterization like Hanebado!” Unfortunately, we’re halfway through the fourth episode, and there has been barely any character development. 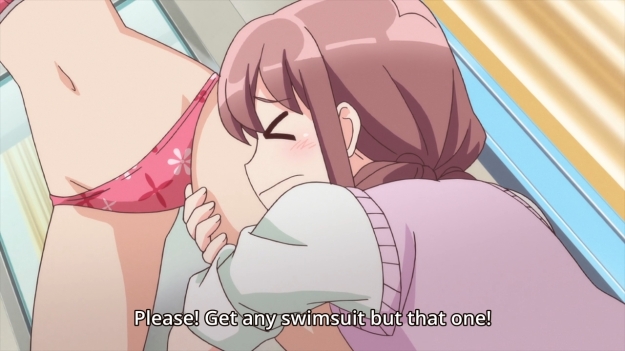 — At one point, Haruka and Kanata finally agree on matching swimsuits, but the former starts freaking out when another duo beats them to the punch. Uh, am I supposed to believe that the store only carries two of these swimsuits?

— She plays rock-paper-scissors for the swimsuits, but she loses in the end. But not all hope is lost; Haruka realizes that she needs to compromise if she wants to level up her social link with Kanata. Want your partner to believe in you? Maybe don’t force them to wear flashy swimsuits that they’re not comfortable with. As a result, she settles on something a little more sensible and thus a little more in line with Kanata’s tastes.

— Something else catches Haruka’s eyes, but we’ll find about it later. Soon.

— Later that night, our Genki Girl announces that she has a very special surprise. Um, we’re eating here. C’mon, girl, nobody wants to see your business at the dinner table.

— At first, I couldn’t tell at all what is so special about her new outfit. But apparently, it’s this Okinawan pattern. Instantly, Kanata looks embarrassed. What Haruka doesn’t realize is that this pattern is supposedly meant for couples. Basically, she just confessed her undying love for her first cousin. Ah, the show continues to tease us with cheap yuri.

— You can’t get a Genki Girl down, though. She’ll just roll with the punches.

— Elsewhere, Narumi gets a message from Emily. She had apparently asked the blonde girl to try and help Kanata rediscover her love for beach volleyball. Hm, okay.

— Emily even decides to “confess” everything to Kanata, telling her all about how Narumi always thought of her ex-partner even as she was moving away to pursue her beach volleyball dreams elsewhere.

— Man, these characters talk as if they’re lovers being forced apart by fate.

— I like how the sun was up before the flashback, but it’s suddenly nighttime when Emily finishes her story. It didn’t seem like a very long flashback to me, but I guess it was.

— Kanata also finds out that Haruka has been practicing without her. The latter wanted to keep this a secret as well. I get her logic, but it’s bad logic nonetheless. She wants to catch up to Kanata’s level so that she doesn’t feel like such a burden. Haruka wants her cousin to trust her. But if you want to develop chemistry with your partner, you gotta practice with them. Sorry, that’s just unavoidable. That’s how teamwork is built.

— But look, Haruka’s been practicing so hard that she needs to wrap up her fingers. That shows you how much she cares! Not just about volleyball, but about Kanata as well! D’awwwwwww…

— Communicate? In an anime? Pfft.

— But seriously, this is a boring episode. Hanebado! has too much drama, but on the flip side, Harukana Receive has too little. If only these two shows could learn to share…