Oh boy, Ginji’s back. I hope you got your coffee, because he’s got long, boring tales for us. Nine of them, in fact!

— First things first, that shady-looking dude that we saw at the end of last week’s episode is still super nosy about Aoi. His name is Raiju, which means he’s obviously based off of the raiju, a Japanese thunder beast. But as I’ve mentioned before, all my knowledge of Japanese mythology comes from Shin Megami Tensei, so when you say Raiju, all I can picture in my mind’s eye is this silly-looking dork.

— To take stock, you need five random-ass items for the ceremony to end all ceremonies. Aoi has already secured two out of the five items for Orio-ya. Meanwhile, Ginji’s been trying his darndest just to get the mermaid scale, and he can’t even manage that. Tsk, tsk, tsk… step it up, fox boy.

— As Aoi heads back to her little hovel in the woods for the day, she hears Raiju playing the flute. Hatori warns her that not only is Raiju as powerful as Ougon-douji, he’s also a hedonist. Y’see, when I think hedonist, I think some sort of weird sex pervert who does drugs. Look, I know that strictly speaking, a hedonist is just someone who pursues pleasure. But hey, how else do you get pleasure aside from sex and drugs? Ehhhh? Ehhh? Unfortunately, Kakuriyo no Yadomeshi is pretty goddamn devoid of anything sex-related, so I have no clue what hedonist means in this context. Maybe all he does is eat and drink. That’s a pretty damn boring hedonist if you ask me.

— Could you imagine someone calling themselves a hedonist, then bringing out a stack of board games? Mmmm, we sure do have a night full of merriment in front of us!

— Anyways, I should continue… Aoi is a bit incredulous, because Raiju’s flute-playing is so beautiful. Could someone so twisted be able to produce such melodious music?! C’mon, girl… Roman Polanski made great movies. That doesn’t mean he’s a good person.

— Oh hey, Ai’s back. Looks like she simply took last week’s episode off.

— Aoi’s busy making a late-night meal for Ginji. Do you think she ever does that for Odanna?

— Ai can sear a fish by simply conjuring up fire from her fingertips. That sounds pretty handy.

— When our heroine is ready to hand deliver her food to Ginji, that ugly dog suddenly beckons her to follow it deep into the woods. Good thing the dog can be trusted, because otherwise, it’d be pretty damn reckless of Aoi to just randomly follow an animal.

— Eventually, the girl reaches a shrine. She also finds a weakened Ginji basking under the moonlight.

— Apparently, our fox boy is having a lot of trouble retrieving that mermaid scale. As a result, his body is covered in impurities. I’m kinda reminded of that scene in Spirited Away. Y’know the one… stuck in his dragon form, Haku was horribly injured. Sen fed him a dumpling that eventually made him cough up the black slug that was poisoning him from the inside.

— Ginji tells Aoi to stay away, but she does what she wants. This is her show, buddy. She tells him to open his mouth, and when he does so, she puts this tiny morsel of food on his tongue. It’s all relative, of course, To us, it’s a big piece of sushi — gigantic, actually. But to a fox god, I can’t believe something that small would instantly heal Ginji right back up.

— After just one bite of fish and rice, all those impurities are suddenly repelled from of Ginji’s body. None of them end up hitting Aoi, of course. It’s magic, yo.

— Aaaand, he’s back. Aoi’s food is just that good, man. Eat your heart out, Jiro.

— Like I said, the piece of sushi was actually quite gigantic. Have you ever had a nigiri that big? Jiro can only dream of matching Aoi’s sushi-making prowess.

— The girl also went and stuck cheese in her maki rolls. Cheese and cucumber… and a bunch of other stuff I can’t recognize. That looks terrible, but whatever. I ain’t no ayakashi.

— It’s just one long, boring backstory. He and Ranmaru, the two canine bros, were taken in by Princess Iso, the goddess of And-1s. You laugh, but just wait until she scores in your face with a hesi pull-up jimbo.

— Unfortunately, the last ceremony failed terribly, so Princess Iso had to sacrifice herself to the depths of the sea. This is like when Michael Jordan racked up too much gambling debt, so to protect the league, they sent him off to the White Sox.

— Okay, enough silly basketball stuff. Ougen-douji would eventually show up and build Orio-ya. Ever since then, Ranmaru changed. Despite him rambling on and on about all sorts of boring nonsense, he doesn’t really specify exactly what Ranmaru did that was so bad. He simply said he no longer agreed with the inugami’s methods. As a result, he defected to Tenjin-ya. He still promised Ranmaru, however, that he would return one day to carry out the ceremony. And, well, here we are. 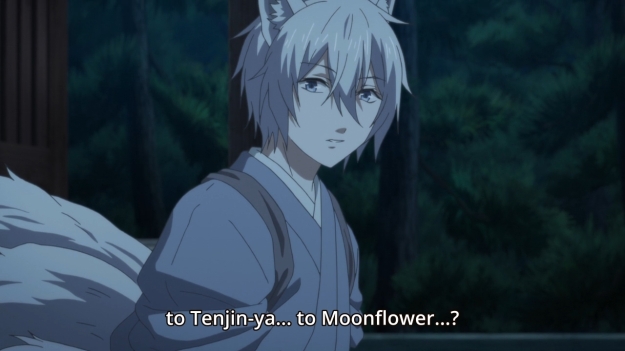 — Aoi desperately wants to ask Ginji if he would return to Tenjin-ya after the ceremony is all said and done, but she chickens out. Do you think she feels this anxious around Odanna?

— Instead, our heroine offers her services. Hey, she’s done everything else. She may as well put this sorry-ass team on her back and carry it all the way to the finals. The dorks at Orio-ya are like this year’s Cleveland Cavaliers. Aoi is Lebron James, Odanna is the underappreciated Kevin Love, Ginji is… I don’t know. I’m tired.

— Ginji claims that Aoi can’t help, because it’s too dangerous. Before the girl can protest — and boy, does she like to protest! — the ugly dog alerts the two of them to an injured Ranmaru at the shrine’s entrance. Looks like a naughty dog went and rolled around in the mud.

— But hey, it’s no big deal. Aoi just has to feed Ranmaru some her delicious grub, and he’ll be right back on his feet.

— As Aoi leaves to whip up a meal fit for a dog, she turns back to see what looks like two brothers making out. Scandalous.

— We suddenly cut to Ranmaru waking up in his bed, so there you go! He’s already A-OK. Aoi even hands the guy a drink full of vitamins. Yes, that’s right! Nothing restores an ayakashi’s spiritual power like Vitamin Water and Flintstones chewables!

— Ranmaru then suggests that maybe Aoi could go and fetch the mermaid scale. According to him, the poisonous miasma that nearly killed him and Ginji will have absolutely no effect on Aoi! Hey, when has Ranmaru ever lied to us? 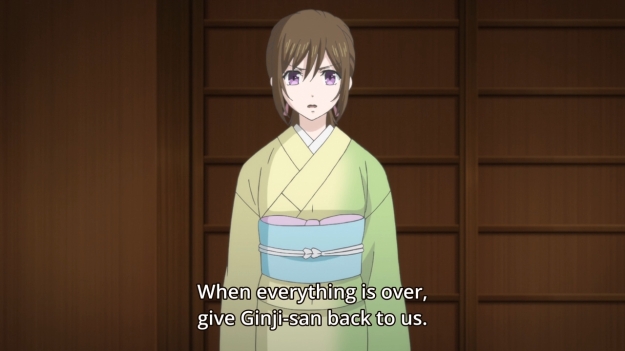 — Our heroine, however, wants to make a deal: if she helps them out with this, she wants Ginji back! Do you think she would make such a demand for Odanna?

— When Aoi returns to her little hovel, she finds Odanna dutifully waiting for her. Without even asking her first, the ogre lord already knows what she’s up to. As a result, he offers to lend a hand. But wait, won’t the miasma hurt him?! No, Odanna claims, he’s a different type of ayakashi. Uh, sure…

— The girl simply blushes. It certainly seems as though the story is leaning more towards Ginji than Odanna, but that’s because the ogre lord is never in any trouble. He’s the one who rescues Aoi, not the other way around. Meanwhile, Aoi has had to worry for poor, ol’ Ginji for quite a few weeks now. If the tables were suddenly turned and Odanna is in trouble, I just wonder if Aoi would worry about him as much as she seems to be worrying about Ginji.

— Anyways, this episode nearly put me to sleep. I tried to make the best of it and write a humorous post, but it’s probably only funny to my sleep-deprived mind.

— I need a quick nap, because Monday shows are just so boring.