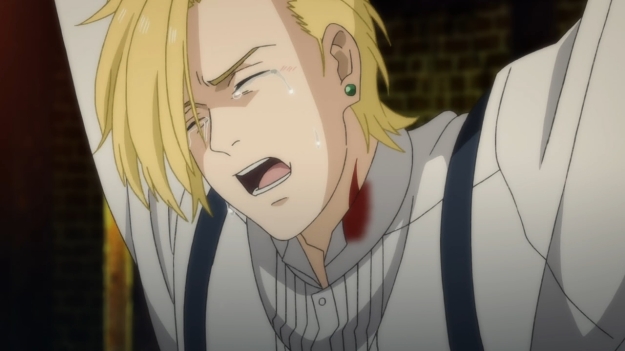 Well, it can’t get any worse, right?

— As a quick aside, I got curious and checked the manga, but only the parts that have been adapted. In other words, I haven’t spoiled anything for myself. Anyways, I found out that the anime actually toned a few things down. For instance, Jessica, Max’s wife, was definitely raped by the Chinese mafia (she said so herself). When she called her husband for help, we saw her in her underwear. In the anime, however, she still had her black dress on and the word “rape” was never explicitly used. I haven’t read through every single page, but I can only imagine what else has been adjusted for the viewing audience.

— Alright, let’s get started. As soon as Golzine arrives, his men immediately overpowers Shorter. I mean, what did the guy honestly expect? Did he really think he could protect Eiji? I don’t know if he’s dumb or just trying to allay his guilt even though he knew he was attempting the impossible.

— For what it’s worth, Golzine also approves of Yut-Lung.

— Eiji is such a naive boy. He also refuses to believe that Shorter had betrayed Ash. There’s a sense in that he’s a virgin in more ways than one, and as a result, cruel men like Golzine can’t help but target him. It’s all about power and submission.

— Long after Shorter and Eiji have been dragged away, Golzine reveals his bitterness and resentment over Ash’s betrayal. But of course, he blissfully ignores the fact that he had abused the kid beyond belief. Classic narcissist.

— We later see Abraham preparing to inject Shorter with his latest iteration of Banana Fish. Y’know, I’m surprised that Shorter is surprised. Again, what did he expect? Oh hey, this guy invented Banana Fish. Oh hey, I’m strapped down to a chair. Gee, I wonder what they’re gonna do to me! 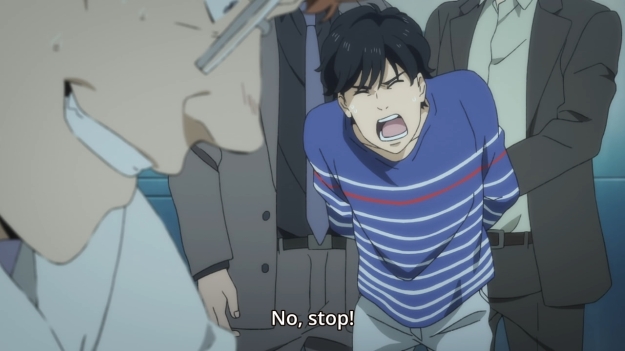 — The bad guys also let Eiji watch the whole thing go down just because they want to be extra evil? Shrug. I always enjoy a good “YAMERO~!!!!” Unfortunately, Eiji’s performance would score maybe a 4/10. Not enough anguish and desperation behind the scream.

— Once the drug is in Shorter’s system, Abraham proceeds to plant ideas into the guy’s head. He tells Shorter that Eiji is his enemy, and as a result, Shorter can’t help but want to murder his former friend. I have a lot of issues with Banana Fish as a concept, but I’ll get to them in a bit.

— Yut-Lung reveals that he hates Eiji just because the latter has had an easy life. ‘Cause that’s what we need. When bad things happen to you, don’t try to prevent them from happening again. Rather, drag everyone else down with you instead.

— We soon see Max and Shunichi dressed to the nines in fancy tuxes. I guess Golzine got their exact measurements and everything. What’s the point of pulling this stunt? Who knows? Maybe the guy fancies himself a showman. It’s really quite pointless if you think about it.

— Ash is the last person to arrive, and when he finally does so, he identifies the wine along with its vintage. Again, we are shown that the kid has many talents. He’s practically perfect for all intents and purposes. His only weakness thus far appears to be his relative immaturity and anger issues. 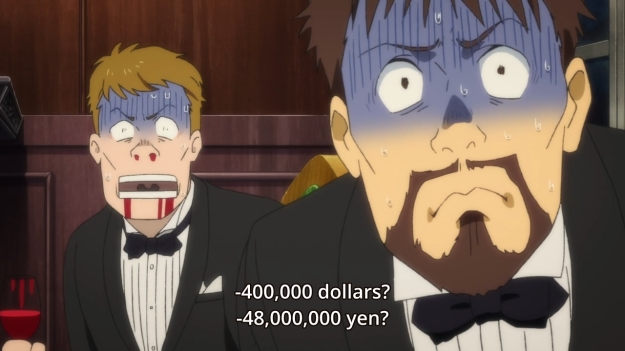 — Golzine also bought Ash a jade earring that is worth $400K. I’m just having a hard time seeing what any of this adds to the overall story. After the man is done showing off his power and wealth, armed men burst into the room and drag Ash away. He didn’t even get a bite to eat! Rude! The food looks so good too, and now it’s just going to go to waste.

— Elsewhere, we see Ash’s loyal gang meet up with Shorter’s gang. They intend to team up and break their respective leaders out of Golzine’s prison. Good luck with that. Well, they’ll probably succeed, because if they don’t, I’m having a hard time imagining how Ash is going to escape all by himself.

— The next time we see Ash, he’s all chained up in Golzine’s… dungeon. Yeah, the guy literally has a dungeon beneath his mansion. I wonder how he got that commissioned without raising any eyebrows. Then again, if he’s got the government eating out of his hands, I guess building a dungeon wouldn’t be that much of a stretch.

— Abraham goes on a rant about how he hated the soldiers for picking on him. One of the show’s biggest weakness seems to be the lack of compelling characterization for the bad guys. They’re just clownishly bad. There’s nothing interesting about either Golzine, Arthur, or Abraham.

— So what’s the game here? The bad guys are going to turn Shorter loose on Eiji and demonstrate the effectiveness of Banana Fish. The former won’t be able to resist killing the latter. Sounds good, right? Well, Abraham adds, “Once he’s devoid of a target, he’ll break and start hurting himself.” Oh. 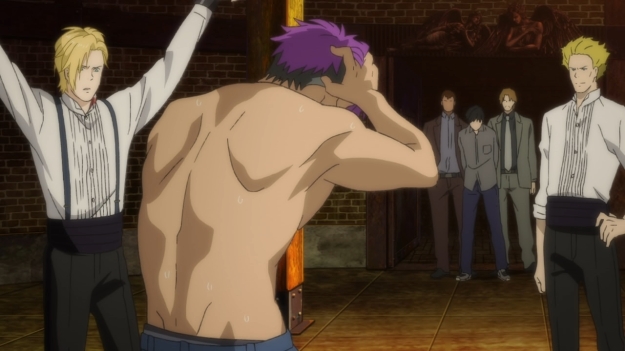 — On paper, I can understand why the government might be interested in Banana Fish. You can convince a soldier to kill anyone! Even his own parents! Talk about following orders to a T! The execution, however, leaves me wanting.

— First, how exactly are you going to administer the drug on a large scale? Are you gonna strap multiple soldiers down at a time and inject them with it? But that’s not enough. You also need to plant suggestions into their heads. How’s that going to work across the entire army? And how are you going to keep this all quiet? How will this not leak out to the press and thus cause an uproar with the public?

— Secondly, the victim is going to hurt himself after he kills his target? Uh, how is that useful? You want soldiers to start killing themselves in the middle of a war?

— Third, the victim is haunted forever by memories even if he does survive. Great. Now he’s fucking useless for future battles.

— Fourth, Shorter might be able to overpower a defenseless kid like Eiji, but he doesn’t look like a killing machine to me! Someone in that state would be easily shot down in an actual battle.

— Maybe Banana Fish isn’t for the army. Maybe it’s for assassinations. Well, even if this is the case, I highly doubt someone suffering from the drug can be an effective hitman. 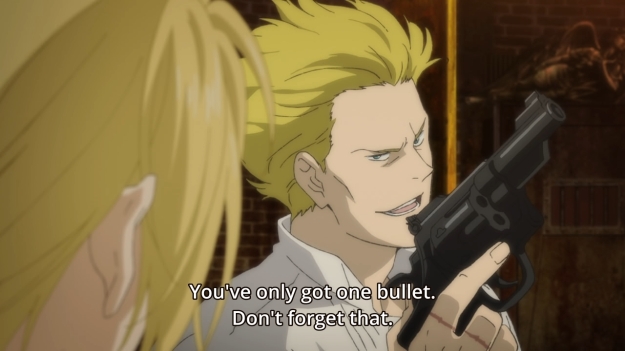 — Anyways, Arthur drops a gun in front of Ash. Our hero will have to kill his own best friend just to protect Eiji.

— For a brief moment, Shorter is lucid enough to beg Ash to kill him. He no longer wants to suffer like this. Add this to another list of the drug’s many flaws. I would not be very impressed if I was that colonel!

— When Shorter is just seconds away from killing Eiji, Arthur releases Ash’s chains just enough for the latter to grab the gun. Our hero has no choice but to then shoot his best friend right through the chest. Thoroughly powerless to prevent this senseless tragedy, all Ash can do is cry. The episode then ends on that note.