And because this is anime, our story has to focus on cute girls. Cute space-fisherwomen, to be exact. 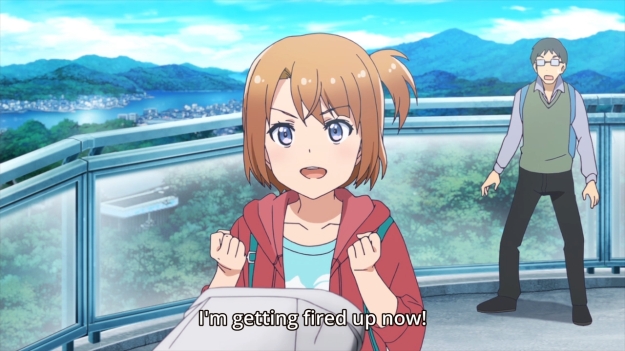 And like almost every goddamn show that focuses on a largely female cast, the main character is an annoying girl brimming with energy. As a result, she’s a bit of a nitwit. 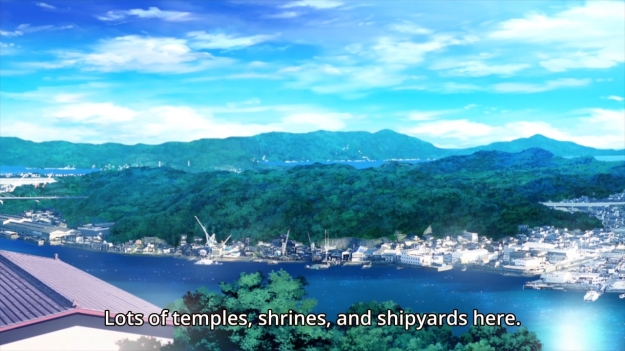 Nevertheless, I get to watch this nitwit go on a sightseeing tour for like five goddamn minutes for some reason. God, I was so bored. Now, it isn’t enough that the show is about cute space-fisherwomen. No, no, no, these cute space-fisherwomen also have to be teenagers. Who the fuck would wanna watch actual women go fishing? Pfft. 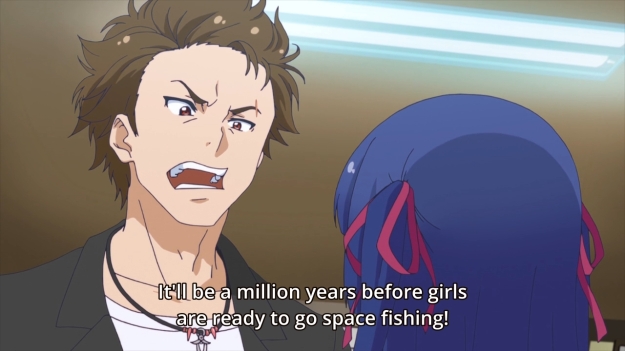 Not only that, let’s shoehorn in some weird sexism thing. Yeah, that’s right, for a long time, only men could be space-fisher… uh, men. But now, women are allowed to join the industry! Too bad the space-fishermen are still big, ol’ sexists for some reason! Argh matey, you can only fish if you have a dick! 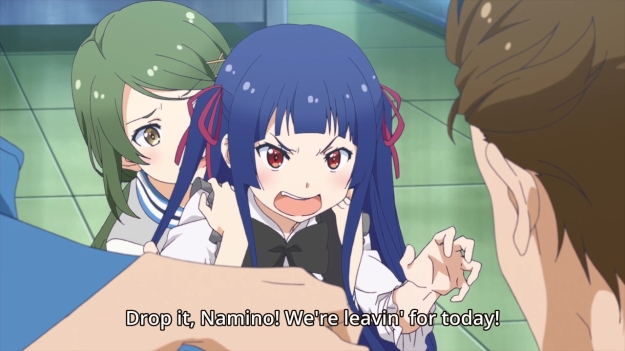 Meanwhile, the space-fishermen (get used to these hyphenated nouns) are literally like a foot taller than all of these girls with square jaws and broad shoulders. It’s fucking stupid.

And of course, when the space-fisherwomen go to do their jobs, they have to wear these skintight bodysuits that hug every curve. There’s even a boob window! How many fishermen or fisherwomen do you think go out to sea with a boob window! 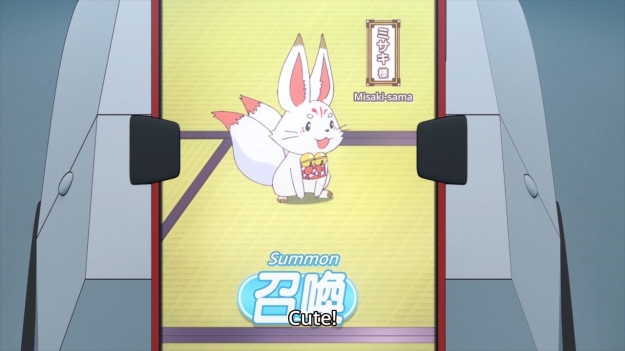 Oh, you think a boob window is dumb? Well, it turns out you need to pick a deity to help you fish. A deity in an app. Without picking one, the vehicle you use to actually fish won’t have the tools it needs to catch the fish. Yeah, ’cause it sure is hard to equip yourself with some harpoons and nets.

No, you need to pick a deity so it can grant you the ability to wield a sword. Yes, catch a fish with a goddamn sword.

Not only do the fish exist out in goddamn space for some bizarre reason, they’re giant. Like whale-sized giant. Yeah, it ain’t hard enough that you gotta go out into space to hunt fish. We gotta make some goddamn kaiju-like fish for you to catch.

And deal with gargantuan killer crabs.

So of course, the newly-formed squad of rookie space-fisherwoman isn’t that good at their job yet, because our heroine literally hasn’t undergone any training. And as a result of their inability to catch a single giant fish in a fish tank that floats in the middle of outer space, the evil sexist man cackles with glee as he gloats over the fact that vagina-havers literally don’t have what it takes to catch space fish. Yep, that’s the show, folks. Amazing.

7 thoughts on “Some space fishing show about SEXISM”