Wanna redeem me? Redeem this.

— Rikka finally tells everyone what Akane had told her: everyone is born from a kaiju that Akane made. Of course, Sho finds this hard to believe, and why wouldn’t he? As far as he knows, he is born from his parents. As far as he knows. No one actually remembers the day that they were born. The best we can do is rely on personal accounts and records from the hospital (i.e. your birth certificate).

— At least Rikka finally believes Yuta now that there’s nothing outside of the city. When they went rafting, Akane specifically crafted that setting just for them. That’s funny because she doesn’t even like going outdoors.

— Sho continues to be a skeptic. After all, he “knows” that he has relatives living in another city. But how do you really know that you actually know anything? Not only must you believe any given statement, it must also be both true and justified. And even then, you can pose a strong argument that these aren’t sufficient conditions for knowledge!

— We suddenly see that Tonkawa and her supposedly dead friends are somehow back from the dead. Even Akane is surprised. She’s a god, but we already know that she certainly isn’t omniscient. She would’ve stopped Gridman already if she was.

— Oh wait, maybe this is just a dream.

— Alexis immediately tells Akane to make another kaiju. Hell, it almost sounds like he’s commanding her. The girl then wonders why she has to make kaiju at all. Good question. Are we going to answer this question, though? Probably not. 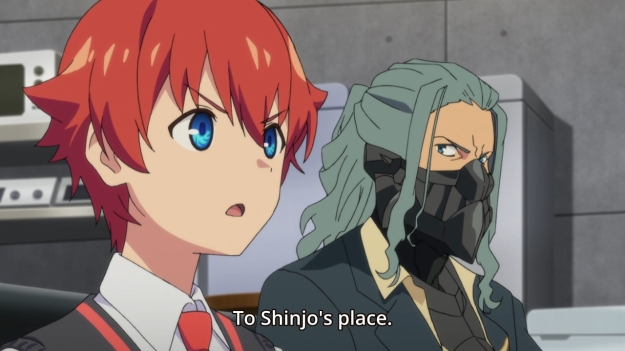 — Back at the junk shop, Yuta finally comes up with a plan. Finally, he’s actually doing something instead of waiting for stuff to happen to him.

— And of course, Akane is just right next door. We always knew that, right?

— This is what everyone sees when they look inside Akane’s home. But we also see Akane chilling in her room like usual. Like our heroes, I don’t know what to believe anymore.

— Y’know, sometimes I’m tempted to just quit some of these shows. Not entirely, mind you, but there’s always that nagging suggestion at the back of my mind that a lot of these series would be greatly improved if I could watch them in one sitting. But if I did that, then I wouldn’t be able to blog my reactions to these twists and turns as they happen. Ah well.

— Anyways, Akane continues to hide herself from the rest of… um, her world, I suppose. So much for Yuta’s plan, huh? He finally decides to do something just to find out that he can’t do anything. So we go right back to sitting on our butts, waiting for something to happen.

— Sho is being forced to face his fears. What are god’s creations supposed to do without god? I dunno… live?

— Well, he’s worried that the world might disappear without Akane. I suppose that could happen. But honestly, almost anything could happen. Our false vacuum could vanish and we wouldn’t even know it.

— But I guess that raises a interesting problem: even if Akane’s a brat — an evil, vindictive brat — some people might rather live with her than face complete nonexistence.

— Up until now, I thought some force of good was resetting the world after every battle, but the Assist Weapons now speculate that a kaiju might be responsible. A kaiju beyond the fog.

— We still don’t know what had happened between Yuta and Rikka right before he lost his memories. I suspect maybe he finally worked up the courage to confess to her only to forget everything, but shrug. We’ll find out later, I guess. I hope.

— Gridman and the Assist Weapons now theorize that they were once a singular entity, but Alexis forcibly split them apart. I guess the revelations are coming in fast and heavy now.

— Meanwhile, Akane can’t get her creative juices flowing. She’s too distracted by the fact that her latest scheme failed. She thought she gave our heroes everything they could ever wanted, but it still didn’t work. More importantly, she put herself out there so she didn’t work. After all, she literally became Yuta’s girlfriend in his dreamworld, but he ultimately rejected her. That’s gotta be a major hit to the ego… especially for a so-called god. She created this world and its inhabitants. She wanted to make them in a way that they would love and worship her. And to an extent, she’s succeeded. Even though I think she’s an evil jerk, these kids still want to save her. But for Akane, this isn’t enough. She needs to have it exactly her way.

— Sho finally shows up… to take his midterms. I guess that’s one way to fight through the existential miasma. 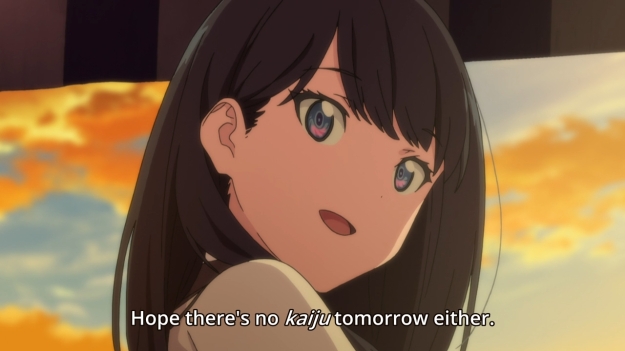 — Welp, you just jinxed us.

— This episode has a rather haphazard flow. For instance, we suddenly jump to Calibur defeating Anti in a foggy alleyway, then laying some philosophical truths on the kaiju. Basically, Calibur is forcing Anti to confront his existence. Even if the kid succeeds, what would he do with the rest of his precious life?

— We’re not even halfway through the episode, but we already have to fight. It’s okay, though. The show manages to burn some time because it literally takes Gridman nearly a minute just to get fully assembled. Oh mecha anime things.

— Not surprisingly, Akane’s uninspired kaiju is defeated rather easily. She only created it at Alexis’s behest. We all know our work suffers when we’re no longer enjoying it.

— Unfortunately, Anti is still stubborn about his abject hate for Gridman, so I guess we’ll deal with him in the time being. It’s like a recurring boss fight against a cool villain character, but Anti isn’t remotely likable.

— It’s extra dumb because Anti was no matched for the incomplete Gridman, so he certainly doesn’t stand a chance against the complete one.

— Yuta all but disappears during these action sequences. Unlike other mecha protagonists, he just has no presence whatsoever in this show. It’s a shame, really.

— Defeated once again, Anti reverts back to his kid-like form. He then begs Gridman to just kill him, but our hero simply phases out of existence. It’s too difficult for the kid to find himself a new purpose for living. He’d rather stick with the one he has and go to the grave with it. That’s kind of sad, I suppose. Humans are known for their adaptability. If he can’t change, then maybe he really is just another kaiju after all.

— Back at the junk shop, Calibur still insists, however, that Anti has a heart, and this is why Gridman didn’t finish him off. So we segue into a discussion about how kaiju are just manifestations of malice, and as a result, they aren’t technically living creatures. Uh, sure. I’m not doubting it. It’s just whatever you say is true is… well, true. Kaiju aren’t real. You can make up the rules as you go along.

— Anti tries to confront Akane. Tries. After all, she’s the one who gave him life. Not just create him, mind you, but like Rikka, she initially treated him with kindness. She gave him food back then when he initially succeeded in his mission. As a result, Akane’s responsible for him not being a kaiju anymore. The girl then says something about how she doesn’t like kaiju that resembles people, so Anti is a failed creation. Was he made human-like in order to copy Gridman’s abilities? And if so, was he always destined to “fail?”

— All of a sudden, this weird thing emerges from the corpse of the defeated derpy kaiju. It then proceeds to behead all of the scenery kaiju. We’re told that it has also killed the kaiju in the fog that normally repairs the city. We’ll later find out from Anti that this kaiju is… um, Akane’s heart? Well, it has to be some representation of it. I guess a part of the girl just now wants to level everything to the ground and wipe the slate clean. Not only has she failed, but her city is a failure as well.

— And yet, in her moment of greatest despair, Akane stumbles upon a stroke as luck: she sees Yuta and Sho hurry to the junk shop. In other words, she’s discovered Gridman’s base of activities.

— Gridman and the Assist Weapons proceed to try and tackle the latest kaiju (a.k.a. Akane’s heart), but they’re actually having a lot of trouble doing so. They can’t read its actions at all. I guess this means that Akane’s heart is difficult to understand.

— One by one, the Assist Weapons are torn off of Gridman’s body, so you see them materialize back at the cafe.

— But just when it looks particularly dire for our heroes, Anti finally decides to change sides. Sigh, we all knew it was coming.

— He initially can’t defeat Akane’s heart either, but he reveals to Gridman that he’s finally found his resolve. His sole purpose in life is still to defeat Gridman. That’s not going to change, apparently.

— Even so, this allows Anti to evolve into… well, something kinda like Gridman, but the Assist Weapons insist that their new ally is its own thing: Gridknight. Sure. I feel like this is supposed to be a hype moment, but because I don’t care for Anti, I’m just like, “Eh.”

— Anyways, Gridman might not have been able to read Akane’s heart, but Gridknight can. And just like that, the latest kaiju is defeated. But again, it can’t actually be connected to Akane’s heart, because the girl is just fine.

— And as soon as Yuta returns to the junk shop, Akane crashes the party. She now understands how Gridman actually operates. Not only that, she’s not going to let anyone talk sense into her as she immediately stabs Yuta in the chest.

— That’s all it takes, huh? We’ve been fighting this entire time, and all the girl truly needed was knifey boi.

— I wish the episode could’ve been a couple seconds longer, because I wanted to see how Yuta’s friends might have reacted. Alas, we’ll have to wait a whole week for that.

— Akane did have one line that is kinda cool on the surface. When Sho questioned why she wouldn’t know of the junk shop’s existence, she replies, “Do you remember every last thing you’ve thrown out?” Ooooh, she’s calling everything here rubbish. But to answer her question… well, no, but I’m also not a god.