Are you kidding me right now? Man, this really should’ve been a two-cour anime. There’s just way too much story here to cram into such a small amount of episodes.

— So what’s been happening lately? The military is going all-out in order to flush out Esperanza and crush the crime syndicate once and for all. Meanwhile, Kirill is still considering Cooper’s offer to join the military. Nothing shady about that, right? Military organizations have always been portrayed as good and wholesome in stories!

— It doesn’t help either that his colleagues would instantly jump ship at the first available opportunity. Why? ‘Cause being in the military has a lot of perks (higher pay, all the food you can eat, more prestige, etc.).

— But sometimes, a lesser career has all the intangibles you might want out of life. For instance, Yuri is planning a trip to the hot springs with Max. When Deana hears about it, she thinks the whole team should go. The whole team including Kirill. Basically, they’re a family here. Sure, he might not make a whole lot of money working for Seven-O — and he may never become a hero — but can you really put a price on family?

— Plus, Doug isn’t exactly enthused about the military and what they’re doing.

— That does not look like a great pizza. And c’mon, a waiting list for a pizza? How hard is it to make a pizza?

— Later that night, Cooper meets with Kirill and he proceeds to drop a bombshell on everybody. On Kirill, on us… everybody. So there are two suns. We know that. The brighter one is called Nikai. Okay, sure, you named the suns. That’s expected. 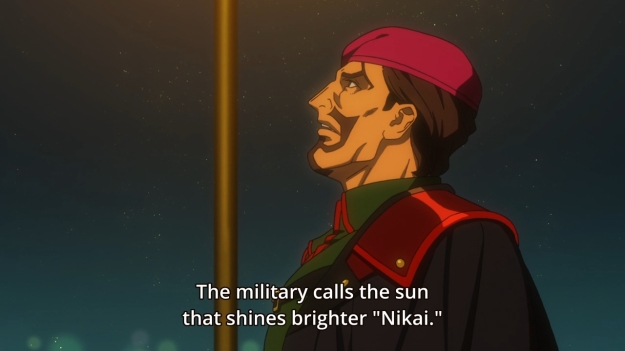 — But wait, there are special humans living on the brighter sun? A sun? You know a sun is hot, right? Like really, really, really hot?

— Even if these special humans live on a space base — which is what this looks like here — that orbits the sun, it’s still kinda crazy, ’cause, y’know… it gets hotter the closer you are to the sun. I really don’t know what to think here.

— Not only that, Kirill and his sister escaped from Nikai. Escaped. That makes it sound like Nikai is not a good place. So the only reason the military is interested in Kirill is because he has special abilities. But what abilities? Why are humans like him and his sister so special? Are we bringing in human experimentation at this late stage in the story? In episode 11? Special humans from… the sun?

— So during this entire scene, I was like, “Cooper has to be bullshitting him. He’s gotta be lying super hard to Kirill, and the kid is dumb enough to believe it.” But afterwards, Kirill goes to his sister and she verifies the story! She even confesses that she left him in order to protect him. Together, they are too conspicuous. She started even dressing this way in order to conceal her identity. That’s right, it’s true. All of it. Special humans from the sun. Unless, of course, Valery is lying to Kirill too. God, I hope she’s also lying.

— Kirill now has a very difficult choice to make, because he’s a very special human (as we’ve been told). According to Cooper, he’s going to endanger his friends if he stays in Seven-O. On the other hand, the totally trustworthy military will definitely be able to protect him and his sister. Uh-huh.

— But when Kirill goes to hang out with Doug, the guy treats him like they’ve been partners for a long time. This touches our hero, so he ultimately decides that he wants to stay with his team. His nakama. His family.

— Anyways, Esperanza is getting pinched by the military operation, so they decide to strike back. What I haven’t mentioned, however, is that throughout this entire episode, you can see that the relationship between Zabel and Bamboo Man is growing increasingly strained. The next morning, we’re told that the military has located Zabel’s hideout so there’s a joint mission with Seven-O to raid it. This, however, smells like a setup.

— Actually, I don’t remember them at all.

— With most of Seven-O stuck raiding an empty hideout, Seven-O’s headquarters are defenseless. As a result, both Apple and Sophie are taken hostage. Basically, the good doctor will have to spill the beans or Zabel will gut the poor girl.

— Apple does end up revealing a few valuable information, but not enough to keep Sophie alive. Luckily, both Doug and Kirill arrive just in time to save them.

— As Zabel makes his escape, the important takeaway here is that Bamboo Man also knows about Kirill and his special status. Not only that, Zabel finally realizes that his second-in-command has been plotting something behind his back.

— Our heroes try to pursue Zabel, but one of his henchmen intends to tag a bomb right onto Kirill’s chest. Luckily for him, Yuri jumps in the way. With obviously no time to disarm the bomb or remove it from her chest, she proceeds to protect her teammates by hurling herself out of a window. Her teammates can do nothing but watch the robot die. 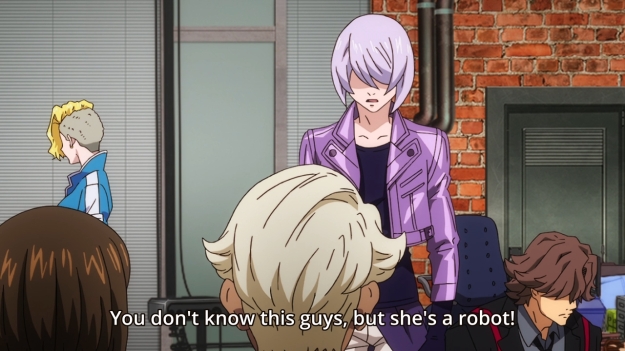 — But as Kirill reminds us, she’s a robot, right? Can’t we resurrect her somehow? You would need the core, but Apple doubts that it would’ve survived the explosion. Well, don’t we, uh, have backups of her personality? Apparently, this is unethical in the world Double Decker. I dunno about that, but I’m not going to debate it. If it’s ultimately a story contrivance, so be it. Eventually, Deana yells at Kirill to just accept that deaths happen in the line of duty. Sure, but… this is Double Decker. Can Yuri honestly be dead for good? I’m going to cross my fingers and say no.

— This ultimately convinces Kirill that he needs to join the military in order to protect the people he cares about.

— Back in Esperanza’s headquarters, Zabel tries to confront Bamboo Man. Apparently, he doesn’t appreciate the fact that his second-in-command has been handing out Anthem willy-nilly. Apparently, Zabel is a crime boss with an ideology. He intends to use Anthem in order to shatter class barriers. I’m not even joking.

— Well, he tries to have Bamboo Man killed, but it’s kinda pointless. We’ve already seen that Bamboo Man is practically superhuman without the need to rely on Anthem. So even though everyone has their guns aimed at Bamboo Man, he quickly murders the entire room including Zabel. His insurrection has been a long time in the making, and he’s finally taking over.

— Not only that, he then morphs his face into Cooper, implying that he’s also infiltrated the military. Was he always Cooper? Or has the real Cooper been killed and Bamboo Man is just assuming his identity? And since he doesn’t need Anthem in order to be super powerful, is he perhaps another one of those special humans?

— This is what I mean when I say that this story is too large for just a one-cour series. I don’t know anything about Zabel. Sure, his plan still sounds like a bad idea, but I wish we would’ve learn more about him and his ultimate goal. We also don’t really get to see how Esperanza operates, so Bamboo Man’s betrayal kinda comes out of nowhere. Nowhere from nowhere, basically. What caused this falling out? There’s no build-up to this. There’s no build-up to the Nikai and special human nonsense either.

— Maybe you could’ve predicted that Kirill and his sister were special right from the start, but from space? From one of the two suns? Eh. I really like the show’s characters, setting, and the overall energy of the storytelling. But this plot is just all over the place, which is a shame.