Or so they say.

— Cultural festivals are always a big deal in anime. It’s probably a big deal in real life as well. Almost makes me kinda jealous, because this is just not a thing in the west. At the very least, it wasn’t a thing at my public high school. The only time the student body ever got excited for anything was the annual football game against our rival. They had better academics, but yay sports!

— Kohaku is super-excited for her event, and I still think she’s underselling it. The ability to enter a work of art is astounding.

— That man has a huge forehead.

— I feel like the principal should at least try the event first if he’s so concerned about it. I’m also kinda surprised that the club doesn’t seem to have a club adviser of any sort. Isn’t that usually a thing?

— I guess thanks to Hitomi, Yuito is now less shy about his art? There’s definitely been character development in this show. It’s just very slow and… kinda unremarkable. It would depend on your perspective. The show is either very relaxing or just downright sleep-inducing. I dunno, I can see both sides. I root for the main characters, because I’m a sucker for romances. But honestly, the show just isn’t very exciting.

— Bunny girl has also changed as she agrees to sell her postcards during the festival. She just hasn’t quite managed to confess her true feelings to Sho. Well, we got two more episodes after this one. Not much time left to goof off.

— As he listens to his friends’ suggestions, Yuito continues to add more details to his painting. Let’s not overdo it, though. 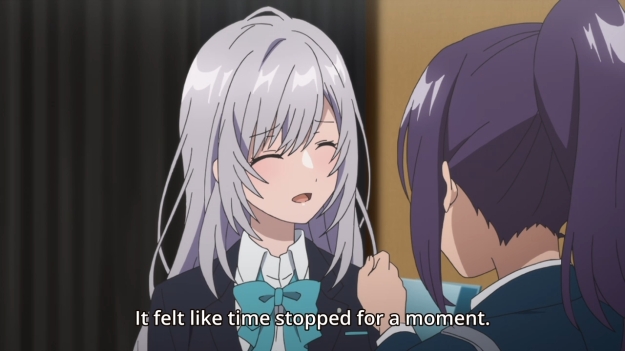 — Suddenly, something weird happens: Hitomi enters another room and just disappears for a brief moment. Most of the kids brush this off, but Kohaku knows better. Maybe Hitomi’s time is slowly running out. Maybe obaachan’s magic is finally weakening, and the girl will soon find herself back in her own timeline. We already saw how Kohaku couldn’t reverse time for long. Maybe her future self could prolong the effects, but the magic spell would still unravel itself in the end.

— Let’s say Hitomi and Yuito eventually fall in love and confess their feelings to each other, but they both realize that the girl doesn’t have much time left. As a result, they spend the next two episodes going on dates or whatnot. Maybe Kohaku will even try to find a way to keep Hitomi in the past, but our heroine still ends up back in her own timeline. She may end up losing her first love, but she is no longer depressed, regains her ability to see colors, and learns to love life. That’s one possible way that the rest of this story could play out. I would hate that ending, though. I would absolutely hate it. You might consider it romantic for two individuals to fall in love across time and space, but… nah, I would hate it.

— Sadly, the response somehow has poorer grammar. Not only that, this is not good news for Hitomi. In fact, it’s even worse news: if she stays in the past too long, she might end up getting stuck in a time gap due to, uh, divergences or whatever. The only solution is to, well, send Hitomi back to the future. The problem here, however, is twofold: 1) this Kohaku has never sent anything through time and 2) Hitomi doesn’t want to leave.

— Hm, shouldn’t Kohaku’s future self have considered the risks and dangers of sending her granddaughter into the past? I can only assume that she believed in her past self to come through, but that’s awfully reckless.

— It’s also emotionally reckless. Hitomi just started to form strong bonds with her friends and now she’s being yanked back through time. How terribly cruel.

— Maybe the mages are wrong. Maybe Hitomi’s life isn’t in danger. Oh well, we won’t find out until the last episode, probably. Maybe future Kohaku knew better… though if you really think about it, she should’ve given Hitomi a letter full of details for all possible contingencies.

— Kohaku tells Hitomi that she will never allow the latter to disappear and get stuck in a time gap. But what if our heroine goes back to being depressed again when she returns to her timeline. Is living a sad life better than living no life at all?

— Later that night, as she stares out the window, all she can think about is Yuito. I guess that’s the one major loose end that she needs to wrap up. No matter what happens, she doesn’t want to be like Asagi. She’s going to have to tell him how she feels or else she’ll regret it forever.

— The next day, it’s raining cats and dogs, and we’re told that a typhoon is fast-approaching. I guess the weather matches our heroine’s current mood. All preparations for the cultural festival are also put on hold.

— Hitomi hasn’t told her friends that she has to leave them, but she’s at least trying to tell Yuito that she won’t ever forget her time with him. But in the middle of their conversation, the girl literally vanishes into thin air right before his eyes. This ultimately forces Kohaku to confess the truth to everyone. The whole club then proceeds to comb the campus in order to look for Hitomi, which I find odd. Why do we assume that she would just pop up in some random location? Wouldn’t she pop up back where she first disappeared?

— Sure enough, Yuito and Kohaku find Hitomi passed out where she had disappeared. Poor girl’s probably going to catch a cold, too.

— Kohaku’s obaachan tells her that her future self believes in her. Well gosh, thanks for the vote of confidence. If I fail, my granddaughter is just lost in time. No biggie.

— Hitomi wakes up the next morning, but she has no clue what had happened to her. I guess there are time gaps in her memories as well.

— Later in the day, Kohaku tells everyone that she needs star-sand that has been bathed in the moonlight for 60 years. Um, okay.

— So on the night of the cultural festival, the entire club will gather at the beach to collect star-sand. They just have two days left to spend with Hitomi. Two days for two episodes.

— Chigusa asks what I want to ask: “Can’t Hitomi just use time magic to see her friends again?” Kohaku replies that things would play out the same way again, i.e. Hitomi would still have to leave them again. But that’s better than nothing. Stay as long as you can, leave, then come back. Rinse and repeat. Or is that just not sensible?

— I disagree with Chigusa regarding Asagi’s crying. Crying does help. Crying is a way to express your feelings and even help reset them. Bottling up your sadness, on the other hand, can be detrimental. If he doesn’t want her to cry simply because it brings the mood down, that’s just selfish.

— Oh right, the time gap. Eh. That’s just the risk she’s going to have to take! I’m being facetious, but y’know, it’s not that wild of a suggestion. If Hitomi has now rediscovered her love for magic, she can always pick up her obaachan’s mantle. Maybe she can devote her life to perfecting the magic spell.

— As for Hitomi, she’s been listlessly brooding in her own room. She’s also lost all her appetite. She just keeps staring out the window towards Yuito’s home. This is what I’m saying, man. Sure, being stuck in a time gap sucks, but if the girl’s just going to fall back into depression when she returns to the future, that’s not an improvement. You could even argue that this is worse than blinking out of existence. At least you don’t seem to feel pain in a time gap. You don’t seem to feel anything judging by Hitomi’s own experiences.

— So uh… how do you separate the star-sand from the regular ol’ sand?

— Hitomi snuck away from home to see everyone at the beach. They’re working so hard to send her home. It’s for her own good, but at the same time, it’s kinda depressing.

— When the girl returns home, she decides to send Yuito a magical paper plane. Well, it’s only magical ’cause it can seek the guy out and home in on him. Good way to check up on your cheating spouse! Anyways, I thought she would’ve written something on it, but no. It’s just a paper plane. Still, this gets the two kids to start communicating to each other via the lights in their room. Also, an insert song has kicked in, so you know something big is coming up.

— She finally sends a paper plane with something written on it, but this one doesn’t appear to be headed for Yuito’s home. This scares the girl, so she starts taking off after it. Where could it be going if not towards Yuito?

— So when the girl catches up to Yuito, she immediately into his arms. My feels, man… 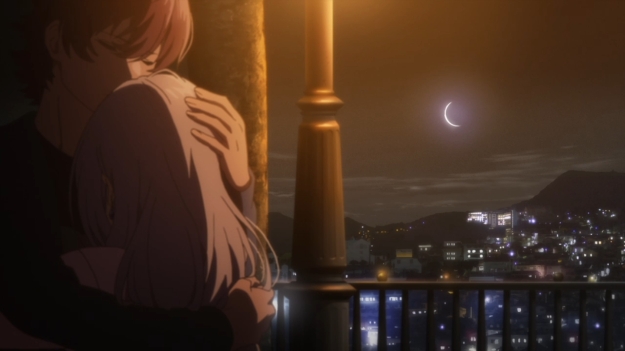 — Of course, I still have questions about their relationships. Like… when and why did she fall in love with him? Likewise, when and why did he start liking her back? Sure, I understand that Hitomi and Yuito share a sort of kinship, but the anime never really nurtured it into anything. She stepped into his memories, and he did the same. As far as love is concerned, however, I’m a bit perplexed as to how things played out the way that they did. Of course, I’m not surprised. These two were destined for each other since the very first episode. I just don’t logically follow the sequence of events. I feel that there are crucial steps missing between “I can see colors in your art” and “I love you.”

— Having said that, I want to reiterate that I would ab-so-lute-ly hate — HATE — an ending in which she just goes back to the future and accepts her fate. Or even an open-ended ending where Hitomi knows she’ll see Yuito again, but she just doesn’t know exactly when. Nuh-uh, give me a definitive good ending, you jerks.

— If I like a show — even if I admit that it isn’t very good — I’ll buy it later on blu-ray. Will I do the same with this show? It’ll depend entirely on the ending.

8 thoughts on “Irozuku Sekai no Ashita kara Ep. 11: All good things must come to an end”