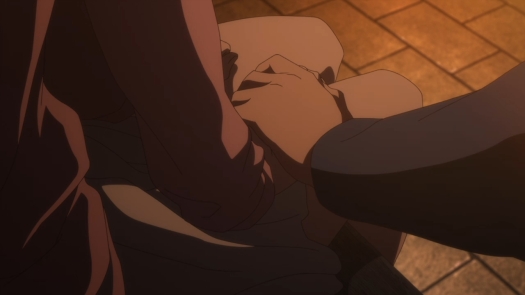 Look at this guy. Look at him grab Hitomi’s hand of his own volition. I just wish this romance had been better developed, ’cause I’m still trying to figure out when exactly he started to have feelings for her (and vice versa, I suppose). We don’t have much time left either. It all ends next week. Ain’t much time left for these two love birds.

— Hitomi starts blaming herself again for being a mage, ’cause they wouldn’t have to say goodbye to each other if she had been a normal girl. But Yuito tells her that they never would have met, so he’s glad that she’s a mage. Reminds me of that bittersweet quote from Winnie the Pooh. You’re damn right I’m quoting Winnie the Pooh:

— Hitomi eventually finds her way home, but it’s clear that she hasn’t slept a wink. The girl is now determined to find out why she was sent back in time. Hm, only took her twelve episodes.

— So the cultural festival is still on, and the girl will spend her remaining two days with (of course) her friends.

— Meanwhile, Hitomi and Kohaku’s lil’ magic escapade is predictably a hit with everyone. Yo, who wouldn’t want to magically transport themselves to another world? They could make killer bucks with this trick.

— Yuito even earned himself a couple of fans in the process. Let’s hope Hitomi isn’t the jealous type.

— His senpai even shows up to wrap up a loose end of sorts (not really). She praises Yuito for finally discovering the joy for drawing for others. That’s all fine and dandy, but some of the most powerful works of art are truly and utterly personal. Sure, the artist will invite you to glimpse at his or her feelings laid bare, but art does not have to be in service towards anyone or anything.

— Anyways, we’re just killing time until the real drama starts, I guess. The real drama being Hitomi’s eventual return to the future. All of this stuff right now is just fluff. If you love the characters, then you would love these scenes. But by themselves, they’re honestly not that engaging.

— Yuito’s mom shows up just to zero in on Hitomi. Look at the exasperation on the guy’s face. Well, don’t get your hopes up, lady, because your future daughter-in-law is truly from the future.

— Oh man, the party never ends. That’s a lot of food for a family.

— Kohaku’s mom asks if Hitomi is ready to return to the future, but who can ever truly be ready for such a thing? She can’t even choose when she goes back. She has to go home by tomorrow night or risk being lost in time forever.

— Our heroine says that she can’t take any luggage with her, so will she even have any mementos to remember the friendships she’s made along the way? Of course, I’m still hoping for a happy ending, but I guess we better start preparing for the worst.

— The second day of the cultural festival feels mostly the same as the first. The line for magical exhibition is even longer than before, but nothing feels too different yet… until Asagi suggests that they find some free time for specifically Hitomi and Yuito. I guess everybody in the club already knows about those two… even though all they’ve done is hold hands two nights ago.

— No progress for Asagi either. She simply tells Sho that she hopes to have the confidence to confess her true feelings one day. The guy just smiles as she runs off. Weak.

— Everyone keeps their feelings bottled up for the “greater good.” Yuito is no different. He supposedly doesn’t want to make Hitomi’s departure any harder than it needs to be, so he won’t confess or anything. But y’know, if she truly leaves for good, he’ll regret never saying anything for the rest of his life.

— Well, nothing brings a couple together like being scared silly. That’s why I like to take first dates to go watch movies about scary, murderous clowns.

— They keep holding hands, and I guess that’s all that we’re gonna get. Holding hands is the epitome if lewdness in anime.

— Hitomi admits to herself that she’s always been drawn to Yuito since the first day she met him. I guess it’s one of those love at first sight thing for her. She even calls him her special someone. But what about him? When did she unlock his heart? When she wholeheartedly expressed her love for his art?

— After the haunted house exhibit, Yuito asks Hitomi if she wants to continue visiting other clubs. Unfortunately, the girl pretty much rejects him can cuts their free time short, because it’s too painful to be together like this when they both know that she will have to leave at the end of the day. Ah, these kids. I’m tellin’ ya… you’re gonna regret not saying anything. But the story probably realizes that. We still have an episode to go, after all. They’re just waiting till the last second.

— Finally, the cultural festival is coming to an end, but our two mages still have one final surprise. What can I say? Anime and manga love fireworks. So many romantic moments in anime or manga revolve around fireworks.

— Hitomi actually feels happy again, so when she gazes up at the fireworks, she manages to see their colors. Just the fireworks, though. Her friends are still in black and white. We’re not home free just yet. Plus, I think this moment doesn’t quite reach the right emotional high, because we also haven’t really explored Hitomi’s emotional lows. We’ve touched on it, but only briefly. Certainly not to the extent that would really make this scene feel like a true payoff.

— Anyways, it’s time for Kohaku to send her granddaughter back to the future. On their way to the park, Hitomi and Yuito keep stealing glances at each other, but neither will say what they need to say. Plus, it would be hard to do it in front of everyone. Internally, however, the girl admits that he’s the biggest reason why she doesn’t want to go back.

— At the park, Kohaku tells everyone that she’ll need their help in order to pull this magic spell off successfully. She also asks Hitomi if the latter is ready. Our heroine nods in agreement, but deep down inside, she knows she’s not. Likewise, Yuito doesn’t want the girl to leave either. The story is basically flashing a big warning sign that Kohaku’s spell might not go as planned because both Hitomi and Yuito still have unfinished business. This was an episode for tying up loose ends and saying her goodbyes, but the biggest prize is still left on the table.

— But unfortunately, that’s where the episode comes to an end. One episode left. One episode to find out if this is a show that I would want to revisit in the future. For instance, Tada Never Falls in Love is nothing amazing, but because I’m a sap for romances, I’ll probably rewatch it one day.

— Obviously, nothing truly bad is going to happen to Hitomi. And no matter the outcome, I’m sure the girl will embrace the rest of her life with earnest happiness. We pretty much know that she’ll regain her ability to see colors in the final episode. It’s gonna happen. For a show about depression, Irozuku Sekai no Ashita kara is anything but depressing. But whether or not the viewers will get a satisfactory ending is a whole different story. If you care about Hitomi and Yuito, better cross your fingers. And if you don’t, well… at least the show didn’t drag itself out.