— This show likes to have its characters discuss important plot events around a table. Considering how we’ve seen this in back to back episodes, this is probably what I should expect from the anime going forward. Kind of a shame, really. These map views aren’t very exciting either.

— So what’s the gist? The player killers infesting all of the areas surrounding the kingdom have either retreated or been killed. Who’s the new girl? Uh, a journalist in an MMO. But with her suit and sunglasses, she looks more like a hitman.

— Oh come on, she even has menacing black gloves. What kinda journalist carries those around?

— Comparing this to Shield Heroine, Infinite Dendrogram definitely takes a few shortcuts. For instance, Kaede is still a newbie trying to learn the ropes. On the other hand, Ray kinda acts and talks like a veteran already.

— We are finally shown a bit of action. I was about to fall asleep. 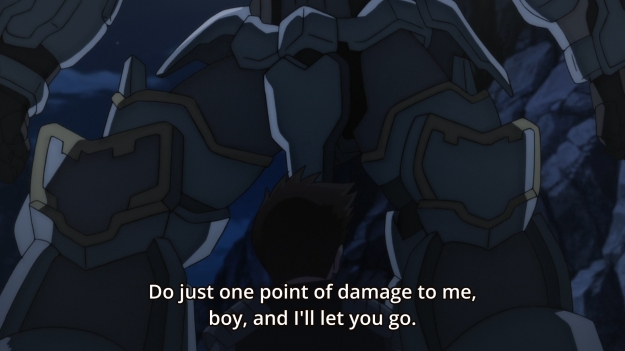 — We start off by seeing a bunch of PKers gang up on a poor newbie. As a reminder, you’re locked out for 24 Earth hours whenever you die, so this is kinda cruel. You’re literally ruining their fun. Plus, I never got the point of targeting newbies myself, but some people get some sort of thrill out of it. Maybe they have urges that they want to act out in a safe environment. Ultimately, this drove me away from PvP servers. Sometimes, you get really fun matches out in the open world. Sometimes. The rest, however, isn’t worth it.

— Finally, someone strikes back against the PKers. Thanks to the journalist, we know that it’s a superior, i.e. someone who holds one of the rare superior jobs. Hell, it’s the guy we just met at the end of last week’s episode.

— And yeah, this is honestly what happens in actual PvP servers. A roving gank squad will pick on newbies until a large guild takes notice and hits them back. As a result, people who love open world PvP will always say, “Just call your friends! Or go to a town and shout for help! That’s part of the fun!” Different strokes for different folks, I guess. Personally, it just feels like a drag when I’m trying to get some questing done before the end of the day.

— The bad guy tries to pull a fast one on Figaro, but the latter expected this. He then defeats the chump in no time flat. And yeah, the depiction here is sadly pretty accurate. Well, not the part where the PKer is sent into space… but these open world PvP bouts are rarely ever fair. It’s typical to expect one side to be much stronger than the other. Defenders of open world PvP will wax poetic about epic battles with both sides exchanging leads, but that’s not human nature. Human nature is to minimize risks. Yeah sure, some people PvP for the simple thrill of it. But most don’t. Especially not the self-proclaimed PKers.

— Journalist Marie’s crystal ball thing sure is convenient. I like how we can see all these events from all sorts of camera angles.

— Oh lord, there’s a religious cult in this VRMMO. Also, anime romanticizes the hell out of large scale PvP. Everyone’s always standing in formation or shit. In practice, you just get amorphous blobs of people roaming around like headless chickens.

— Man, this MMO loves its bloodsplatter. I don’t think I’ve ever played an MMO that I would consider gory.

— It’s curious how when it comes to the north, Marie doesn’t have any info about the PKer’s identity. She, however, acts almost proud that the PKer escaped with their lives. Am I too suspicious of Marie? Shrug. In the real world, it’s possible for some random person to just walk up to you and start a conversation. In fiction, however, this is rarely the case. Marie must have a motive for deciding to get close to Ray and Nemesis. Maybe her intentions are ultimately good, but I don’t think she’s being entirely honest.

— Ray and Nemesis briefly revisit the spot where they were killed in last week’s episode. It has been burnt to a crisp thanks to some player with a battleship for an Embryo. Well, they say it’s just a rumor, but still…

— Our protagonists then immediately go through a portal for more snacks, drinks… and… sigh, presumably more exposition.

— Yep, more exposition. Snooze… I’m not even going to get into what they talked about here. I’m all talked out, yo. At least Kaede and Risa went on adventures.

— Near the end of the episode, Ray joins up with Rook again to — yes, you guessed it — talk some more. They’re finally looking at job requests. We also get to learn that there’s a Pimp job in this MMO. Really great stuff. 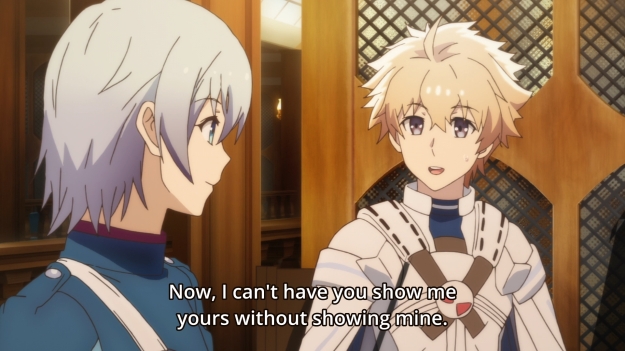 — Marie shows up again and shoehorns herself into the group. That’s it. That’s the entire third episode. I feel like barely anything happened. I mean, this isn’t technically true. We did learn how the PKers were wiped out… but I dunno, it just doesn’t feel significant?

— Right before the credits roll, we see that these low level quests are more dangerous than they seem. So maybe — just maybe — we can stop snacking and pick up a sword.