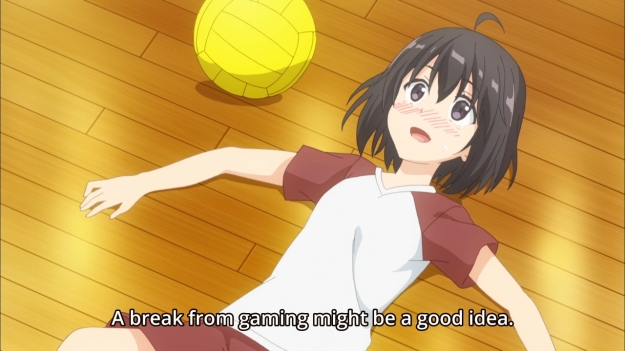 Welcome back to our dreadfully dull MMO adventure! This week, however, we finally get around to forming a guild!

— First things first, we get a brief respite from New World Online by watching Kaede bumble through a day at school. She falls asleep in class, gets into a fighting stance when someone accidentally bumps into her, and tries to block a ball with her nonexistent shield during P.E. Welp, someone desperately needs to step away from the game. There have been stories about people forming an addiction over MMOs. Hell, some parents have tragically allowed their children to die over a goddamn video game. I can only imagine how much worse things will be once VR becomes more widely adopted.

— After embarrassing herself thoroughly, Kaede resolves to take a three-day break from New World Online just to reset her mind. That sounds reasonable, I guess? It could’ve been worse. For example, this one dad hired people to assassinate his son’s in-game avatar to deter the kid from playing too much video game.

— At this point, however, I think we’ve moved slightly past the fear of video games consuming our entire lives. Instead, we now worry about kids blowing way too much money on micro-transactions.

— Even though Kaede wants to take a break from the game, we’re right back in it after the OP. Screw the real world!

— And while Kaede was gone, housing was implemented as a feature. As a result, players get to go around and buy a home to call their own. Unfortunately, these houses are not instanced so it’s “first come, first serve.” The girls quickly find that all of the good houses are taken. I’m sure I’ve mentioned this before, but FFXIV made a similar mistake. At the moment, if you want to own a house, you’ll probably have to cheat or give up having an actual life. 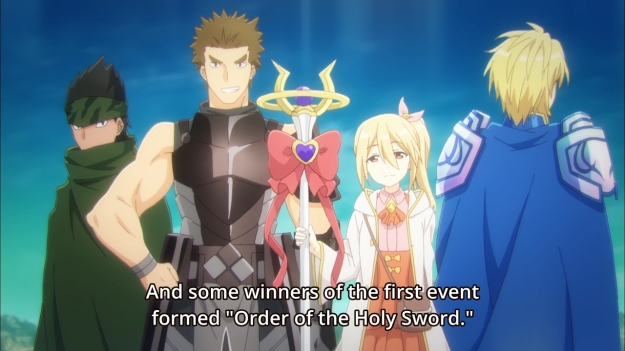 — Apparently, these dorks are the best PvPers on the server (as well as the entire game?). Imagine posing for an in-game screenshot and insisting that you will turn away from the camera just to look badass.

— Eventually, the girls stumble across a literal treehouse that is just quaint enough for their humble needs. It doesn’t take long for the two of them to claim the house for themselves. But now they need to fill all this empty space with people! As a result, we finally get around to forming a guild.

— They immediately seek out Kasumi and Kanade. I can understand the former. Our heroines hung out and even completed a dungeon with her. But the latter? Didn’t we meet her like once? Plus, for a fantasy game, she sure does look boring in that white t-shirt.

— We can’t stop there! We need a guild crafter! So of course, Iz has nothing better to do. No one has recruited her yet! Obviously, she’s free to join!

— As for the dude, you gotta have at least one token member of the opposite sex! Wouldn’t want this to be a saus-… er, taco fest. But that also reminds me of a peculiar thing about gaming in general: people play as the opposite sex all the time. I will create a female avatar in games if I don’t like how the male avatars look. There’s even a joke in FFXIV that all female miqotes (the catpeople race) are really just dudes in real life. I have no idea if this occurs in Shield Heroine. I have no clue at all. And until the show suggests otherwise, I’m going to assume that all the girls are girls, and all the boys are boys… which is ironically unrealistic.

— I poke fun at Kuromu (why so many names with a K?) for being the token guy, but at least he exists? There are lots of shows about cute girls where males seemingly don’t exist. There was a recent volleyball anime just like that. Like… do people not have dads? Do these girls just reproduce asexually? Ah well, I’m getting off-topic.

— The turtle is named Syrup for Maple… get it? And now, the guild name is Maple Tree… ’cause she’s the guildmaster… and she’s living in a tree. Woo.

— We get to watch a pair of scenes where the guild members split up to gather materials. Nothing too exciting. It doesn’t seem like the story’s original author has a great imagination. I mean, you just have Risa fighting Groots for some reason…

— Getting and losing a random skill once a day sounds pretty unfun in practice.

— Afterwards, they hold a meeting to discuss upcoming events. Token dude actually stands up and delivers the news as if nobody else has heard them. C’mon, if these were true MMO gamers, they’d have read the news or update notes the second that they drop. Only then do they log into the game (or Discord) to geek out with their friends.

— One of the upcoming events is a guild competition, so the group decides that they need to recruit more people. In other words, we’re going to invite a couple more players and never open up recruitment again!

— Kaede and Risa check the party recruitment bulletin board, and the results are… not what I would expect. DPS wanted? Uh, what kind of MMO is this? Lest you think I’m joking, DPS is almost never highly sought after. Tanks and healers are always in-demand, because everyone wants to be a DPS. See, as a damage dealer, your only concern is doing BIG NUMBERS. Tanks usually have to lead the group and thus know a dungeon inside and out. Healers need to keep the party alive, which can be stressful for certain folks. People rarely stress out about BIG NUMBERS.

— Having no luck on the second floor, the girls return to the newbie area. After all, why recruit a hot shot when you can mold a lump of clay to suit your needs?

— So Kaede spots a couple of sisters despairing over the fact that they can’t seem to find a party, ’cause they made the mistake of putting all their points into strength. Man, what a coincidence.

— But when Kaede actually tries to recruit them, the two sisters hem and haw: “Um, thanks for offering, but we’re pretty weak and still only beginners.” C’mon, it’s a guild invite. It’s not a work contract with conditions to fulfill. In most MMOs that I’ve played, there will be people recruiting by shouting in any of the major cities. You send them a whisper asking to join, they give you an invite, and… that’s it. Unless you’re explicitly looking for an end-game guild, no one ever worries about being “too weak” for a guild. And if someone is recruiting you in the newbie area, it’s safe to assume they don’t care about your levels (or lack thereof).

— Nevertheless, we have to visit a cafe in order to “finalize” this recruitment… man, what is with MMO anime and eating?

— It would do the two newbies no good to join the guild if they’re still stuck on the first floor, so we get to see Risa take on an old boss with some new tricks. Yawn.

— And before you know it, Maple Tree has two more cute girls. No boys allowed! Just one boy! But absolutely no boys!

5 thoughts on “Itai no wa Iya nano de Bougyoryoku… This Title Is Too Damn Long Ep. 6”