We begin the episode with Kaede showing off her new destructive powers to her friends. Some are excited, others are bemused. But for me, I think this is a cop-out. Our heroine is all about stacking defense. This should come with both upsides and downsides, and the story is supposed to explore how our heroine navigates around said downsides. But what downsides?! How can there be downsides if you are given offensive power outta nowhere to make up for what should be your character-defining weakness. “Yeah bro, I don’t lift at all, but I can totally still beat you 1v1 with my AK-47!!!”

You could still do a show about a weak character being empowered by items, though… if they at least earned those items. For example, let’s pretend for a second that Deku in My Hero Academia was never actually given a Quirk. Instead, he is like Mei, but he takes it a step further: he invents his own gadgets so that he could still fight on the level of a hero. I would totally watch that. I might even find it pretty interesting. But you gotta earn it. You can’t just fall off a cliff into a forest, magically find a random gear that you absolutely wasn’t looking for, then magically stumble onto a boss encounter on an entirely different level that needs said random gear. The tryhard, never-give-up protagonists are a dime-a-dozen, but we can at least root for them. Kaede just blindly walks her way into success. Are we sure she didn’t put all of her points into luck instead?

Alright, rant over. Let’s get to the rest of the episode…

— We kinda a get a beach episode? Not everyone is down for relaxing, though. Kasumi is busy studying the blade. We also get to see Iz do something besides crafting for once, and her efforts are quickly rewarded.

— Eventually, our beach girls run into Frederica, who’s only here to scout out Maple Tree for the upcoming guild competition. As a result, Risa challenges her to a duel that ends up being pretty anticlimactic (like always).

— Typically, mage-types like Frederica are weak to assassin-types like Risa, but New World Online isn’t your typical game. As a result, the former can shoot off spells with barely any casting time. And whenever Risa does get close, she has a barrier. Still, Frederica ends up conceding the duel anyways because she doesn’t want to let the competition see too many of her moves. Yawn.

— Midway through the episode, Kaede and her guildmates meet up to learn the rules for the next event. Something about defending and attacking, capturing orbs, blah blah blah. To be honest with you,  I tuned it out.

— We then get a brief montage of everyone grinding for levels. It’s really not worth getting into.

— Finally, the guild competition starts, and Maple Tree assigns most of the team to defend the base. After all, they’re a pretty small guild. For offense, we just have Risa zipping around like a speed demon. She’s able to take on like fifty dudes on her own, dash into a base without anyone noticing, steal the orb, then vanish seemingly into thin air. She even gets two guilds to fight each other.

— She’s not the only one man army out there, though. We also get to see this dude wipe out an entire attacking force. Man, PvP in this game must be frustrating, huh? I mean, I like PvP when everyone’s on a level playing field. If one dude can level up high enough so that he’s a one-man army, what’s the fun in that?

— Sure, asymmetrical PvP like Dead By Daylight has gotten really popular really, but even then, those games are limited to a handful of people versus one super badass. In New World Online, however, you can have an entire guild full of super badasses.

— During her little solo excursion, Risa runs into the thief guy from the top guild, Order of the who cares. But like with Frederica, they don’t fight for very long. We get to see a bit of duel-wielding madness only for the guy to run away. Everyone keeps doing these tactical retreats.

— Risa also runs into Mii of the Flame Emperor. The latter initially gives chase, but she has no ability to track someone after they’ve gone into stealth. The best she can do is try and flush Risa out of the forest by burning it all down… but try is the operative word.

— Still, I kinda like the fact that she crumples afterward and starts despairing. Being a leader is stressful! Too bad this sorta thing is only briefly mentioned here instead of being explored as a topic for an entire episode. 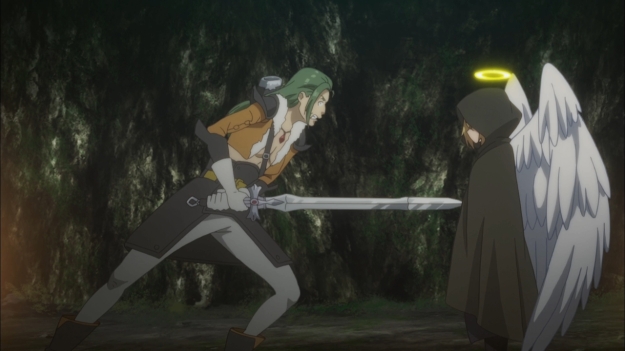 — Eventually, Maple Tree gets attacked, but only by a buncha nobodies. So of course, they can’t even scratch our heroine.

— Still, we’re slowly building up towards a big showdown with the top guild. I have no faith in this series pulling off an epic showdown, but we’ll see, won’t we?