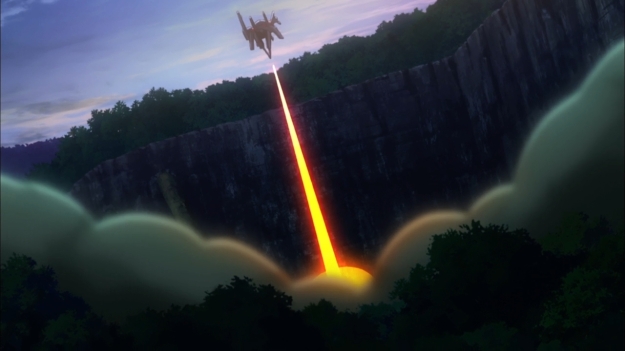 When you’re up against a bunch of medieval soldiers, there’s only one thing to do: ummm… turn into a mecha and nuke them from orbit? What’s next? Is Kaede gonna drop a colony on some suckers?

— The episode starts with that swordsman from the top guild cutting everyone down. He even pulls off Link’s patented spin slash. Ooh, so cool. His foes are so nice to stand equidistant from each other! In any case, the anime wants you to know that he’s totally badass so you can steep in anticipation for the inevitable clash between him and Kaede.

— Speaking of Kaede, she and her friends still haven’t cracked the top 10. After all, they’re just a small guild and they don’t have that much manpower. But why pit small guilds against large guilds? Why not have divisions for this sort of thing? You wouldn’t make a lightweight fight a heavyweight.

— In any case, Risa goes out to fetch orbs again. Her friends worry that she might tire herself out, which is an obvious sign that she will tire herself out. Expect to see her nearly die later in this episode. Still, what does it even mean to get “tired” in a video game? If you run out of HP/MP, that’s one thing. But virtual exhaustion?

— We also get to see the supporting cast do some work this week, but folks like Kanade hasn’t had any character development. As such, it’s hard for me to really care what he’s up to.

— I do like seeing Iz chuck explosives at her enemies. Since she’s primarily a crafter, this reminds me of those bomb-throwing alchemists from the Atelier game series. 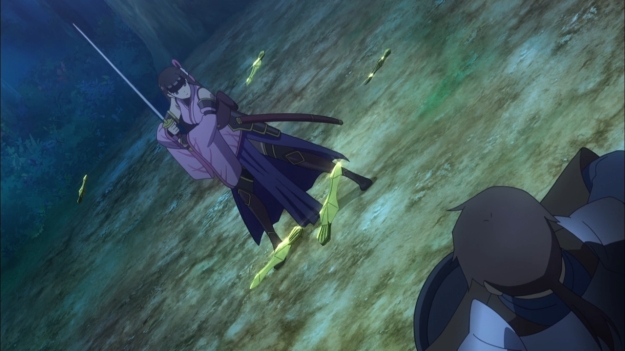 — Kasumi is still showing off her sword skills. She finds herself fighting an old rival whom we’ve never met before, so again, no emotional investment here.

— Last and very least, Kurumu (Chrome?) nearly dies, but his armor keeps him up. 50%, however, seems pretty lousy to me. It’s certainly not something I would bet on. From my experience, this sort of gear would be like, “On death, revive with 1 HP once. Cooldown: 2 hours.” A 50% chance sounds terrible by comparison.

— Anyways, like we easily predicted, Risa gets worn out and thus surrounded by the enemy. This time, she can’t seem to get away. We soon discover that Frederica is leading this brigade against Risa, but I didn’t even know Order of the Holy Sword had this many players. Shrug. Plus, this show has the same problem as every other MMO anime: the faceless soldiers are always 100% men. Isn’t that weird?

— So on her last rope, Risa apologizes to Kaede for possibly dying. Naturally, I assumed that dying meant she would no longer be able to participate in this event. But if she’s just going to lose the orbs in her possession, it doesn’t really seem like a big deal to me.

— Kaede swoops in at the last moment like some badass heroine. She proceeds to go Mecha-Maple, blast off into the sky, and carpet-bomb Frederica’s army. Welp…

— But with Kaede distracted, this allows that thief to attack the base with only the two sisters on defense. I think his name is something edgy like Dread.

— Oh no! He’s gonna be too fast for Mai and Yui! Normally, you’d ask yourself, “So what can we learn from this? Ah, that’s right! Don’t put all your points into one stat!” But we know that won’t happen.

— And sure enough, he is too fast for them. But luckily, Kaede manages to return with an injured Risa. All of a sudden, our slow, defense-only heroine has no problems zipping around the battlefield.

— So they defeat the thief, but the two sisters also die. It’s okay, though! You just respawn! That kinda takes a big chunk out of the tension. Dying in the event doesn’t really punish you all that much.

— Elsewhere, Kasumi finally defeats her rival, and her hair turns silver in the process. What is this…? Ultra Instinct Kasumi? But again… emotional investment… yadda yadda yadda…

— Risa finally reveals what she’s been working on: a map of all of the opposing guilds’ locations. So this time, Kaede can finally go on the offensive. I was wondering why our heroine was on defense when she can literally turn into a mecha. Still, it’s quite remarkable how no one is complaining about the massive gap in power level between the top and bottom players. Compared to the average player, Kaede and Payne (that’s the swordsman) might as well be raid bosses.

— Speaking of which, I like how Order of the Holy Sword has names like Dreeeeeeead… Paaaaayne… Draaaaaaag… and then finally just Frederica.

— A tired Risa finally passes out, but like I said earlier, what does it even mean to sleep in a game? Do you just watch your avatar nap while you twiddle your thumbs in real life?

— Before the episode wraps up, Kaede and the two sisters go from one enemy base to another, leaving naught but destruction in their wake. This is like some cheesy action movie. Oh, it’s just our heroines walking slowly through the battlefield as explosions go off all around them. They just need badass sunglasses to complete the look.

— We thus end with our girls staring down Mii from The Flame Emperors. Well, we certainly know what next week’s episode will be about.

— My overall thoughts on the episode? I dunno, really. The action usually consists of one side dominating the other side, so it’s not exactly exciting to watch. And there’s nothing really at stake here other than pride.

4 thoughts on “Itai no wa Iya nano de Bougyoryoku… This Title Is Too Damn Long Ep. 10”