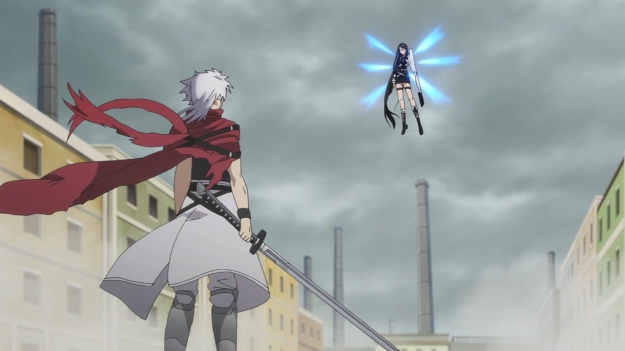 Ugh, it’s that time of the week again. It’s time for me to punish myself with yet another episode of Plunderer.

— Licht and Sonohara are gonna throw down, and they’re betting all the marbles… or stars… or whatever. The latter wants to die, but then she’s also fighting back! Because, um, I dunno… maybe dying without a fight is meaningless or something. Then again, everything that has been happening so far in this series seems kinda meaningless.

— While our two opponents go at it high up in the sky, the peanut gallery talks about Counts and how they are completely meaningless. Sonohara’s Count? 32000. Licht’s? 5700. So he should get stomped, right? But if Dragon Ball Z has taught us anything, it’s that fighters can power up. They just have to stand in place and grunt awkwardly for a good ten to fifteen seconds while their foes do nothing to stop them! And bam, just like that, Licht’s count is now up to 57000. It’s now Sonohara’s turn to get stomped! Too bad, uh, we can’t animate, so we’ll just zoom super far out to avoid having to draw any details…

— But we’re not done dumping exposition on you just yet! Nana explains that power doesn’t just come outta nowhere. You gotta become evil to increase your fighting strength! So all of a sudden, Licht’s aura goes from red to purple and that’s bad. But don’t get me wrong, because I don’t really care about Licht’s personality shift. What gets me is how Sonohara goes from being a mass murderer to completely blameless at the drop of a hat. When Licht knocks her against a wall, she somehow regains her sanity. As a result, her Count drops… but she’s also back to “normal.” This means that when she was gunning down the townspeople, it wasn’t really her! She was just being influenced! By what? By drugs! As a result, the cute megane kouhai isn’t actually evil after all! Yay!!! Protect our waifus’ innocence! 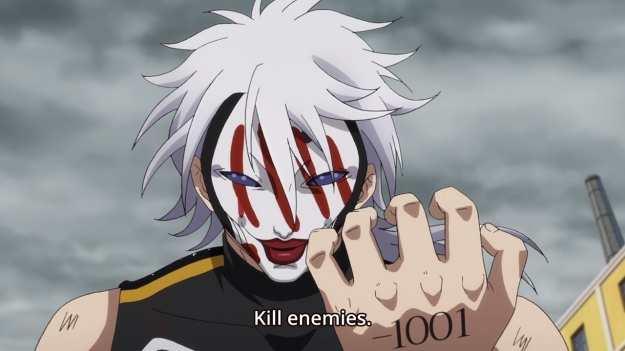 — Unfortunately, there’s no one around to knock some sense into Licht, so he still wants to kill, kill, kill. Sonohara’s life flashes before her eyes, and we get a glimpse of these two back when they were just kids. Awwww… oh well, time to die.

— This is when Jail shows up outta nowhere to save the girl. Yeah, nobody thought he would die… even with that gun wound to the chest.

— Jail then proceeds to go on and on about how the current Licht, as powerful as he might be, lacks conviction. Our hero claims that killing his friends is the only way to stop them from becoming murderers, but he doesn’t actually wanna go through with it. So who has conviction? Jail does! Jail and his iron is full of conviction! And he’ll prove it to ya! The dork proceeds to slip on a second black glove, and in doing so, his count is now up to 45000! Now, you might say, “Hey, that’s still lower than Licht’s 57000!” And to that, I say pay attention! Didn’t Jail just tell you all about how conviction is what truly matters! And just like that, Jail is able to knock some sense into Licht.

— Alright, hol’ up. Hooooooooooool’ the fuck up.

If Jail could simply slip on a glove and increase his Count to 45000 — which, by the way, is higher than Sonohara’s former count of 32000 — why on earth did he not do this before she and her goons killed all those townspeople and soldiers? Let’s look back at last week’s episode… let’s look back to when evil Sonohara was just gunning people down like sport: 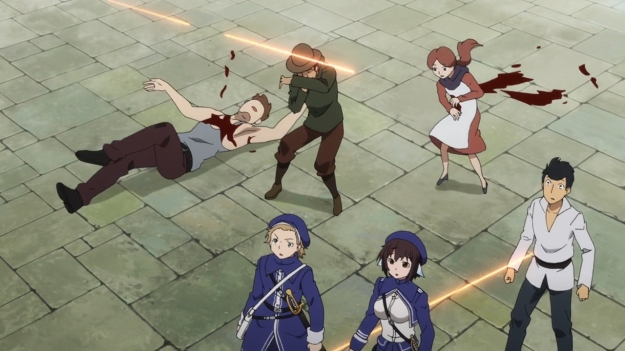 Where the fuck was your conviction then, Iron Man? Why didn’t your ironclad justice compel you to save them?

— But whatever, stupid show is stupid. Our Licht is back — tears and all — so all the girls hug as though a buncha people didn’t just die for no reason.

— Elsewhere, the true bad guy is reading a story to a bunch of kids. Oh, it’s the classic tale about the hare and tortoise. But because this guy is all evil and shit, the story has to be twisted as well.