When enemies attack, it naturally falls upon low-levels like Ray to save the day.

— In the cold opening, we actually take a brief visit to the past and learn how Marie had come to befriend Elizabeth, the second princess of Altar. We’ve already learned before that Gideon is a not-so-nice place. In its back alleys, children get kidnapped all the time for unsavory reasons. Even princesses are no exception.

— Like always, princesses run away from their handlers for selfish reasons. And like always, the people assigned to guarding these princesses are just straight up incompetent. And when these precious princesses inevitably run into trouble and require rescuing, do they ever learn their lesson? Of course not.

— After the OP, we’re back to the present where Franklin continues to taunt all the Masters trapped in the coliseum. See, he’s got it all figured out. If you talk back to him, you get swallowed up by a slime. And if you try and break the barrier surrounding the coliseum, he’ll unleash monsters within the city — monsters that will no doubt kill scores after scores of innocent Tians!

— And sure, low levels like Ray might be able to pass through the barrier (what an arbitrary “loophole”), but he has defectors on standby. These traitors will have no problems killing their “countrymen.”

— And why is Franklin doing this? Because he wants to crush Altar’s spirit before the next major war even starts. Altar’s Tians already have little faith in the player population because they didn’t show up for the last war. If they fail to protect Gideon, I guess that’s the final nail in the coffin?

— Nevertheless, our hero can’t stand idly by! Shu warns him that he’ll more than likely die if he goes out there, but Ray doesn’t care! There are people in need! People who are just… uh, NPCs…

— So we’re back to square one… in my opinion, at least. First, death is not a big deal in my eyes. You just get locked out for a day. Yeah, that sucks, but it’s still not a real consequence. I’d just go and play another game, y’know? Hell, I’ve got Nioh 2, Animal Crossing, Persona 5 Royal, FF7 Remake… the list just goes on and on. If I couldn’t play an MMO for a day, no biggie. Life goes on. So the real problem here isn’t that you get locked out. It’s that… why are you guys so addicted to this game that you can’t bear to be away for a day?

— Secondly, Tians are still just NPCs. They’re not real. Until the story pulls some stupid shit out of their ass like how this game is actually a portal to a different dimension, and Tians are real people, I will continue to see them as no more than chunks of code. Pretty complicated code, sure, but still just code. You can argue all you want that they have real feelings, but if that’s the case, we never should’ve made a game out of this in the first place.

— At the end of the day, Infinite Dendrogram‘s solution to all of these problems is to scream over and over that it’s more than just a game. But you can’t just insist this and expect the viewers to buy in. You have to make a compelling case for why I should care about these NPCs. And I’m sorry but Ray looking sad over a few NPCs dying doesn’t cut it. Yeah, I get the feels too when I play a game with a tragic ending like, say, Nier. But at the end of the day, I still put the controller down and accept that it’s all fiction. Doing otherwise is simply unhealthy. You wanna claim that this is more than just a game? You’re gonna have to do a better job than this.

— Anyways, rant over. The traitors on the outside are eager to fight against their former allies. On paper, I think we’re supposed to find this… I dunno, horrendous or something. And likewise, I think we’re supposed to hate Franklin. Like, O-M-G, how could he do this to the innocent people of Gideon? So many will die! But from a gamer’s perspective — especially an MMO gamer — this sort of event is exactly what players are looking for. Imagine logging into any MMO, hitting up one of the major cities, and then all hell just breaks loose. That sounds like fun, man.

I like MMOs as much as the next guy, but they tend to be very stale. They tend to lack dynamic events, and this is what usually holds them back from having what feels like a living, breathing world. Games like Guild Wars 2 would try and incorporate these ideas. “Try” is the operative word. Sometimes, “special” events will occur (e.g. monsters attack a farm), and depending on the actions that you take (e.g. you try and stop the attack but you fail), the conclusion of said events can alter how a map looks (the farm is destroyed). Then you might have a follow-up event (e.g. repair the farm) which will restore the map to its previous state. But these are only fun the first time around. And they are of course inevitably scripted. After a certain amount of time has passed, the event will reoccur like clockwork. This will keep looping for as long as the server stays up, so as you can see, it’s hard to keep these things fresh and interesting to players.

So while Ray may see Franklin’s attack on Gideon as a disaster, I just think it’s fun. And it’s doubly fun when it’s caused by another player and not just a script that executes on a schedule. I certainly wish this sort of thing could happen in Final Fantasy XIV. The only time we ever came close to having this sort of thing was when the developers were just about ready to shut down the terrible version 1.0 of the game. As a result, GMs would spawn random monsters within cities because the apocalypse was (literally) nigh. 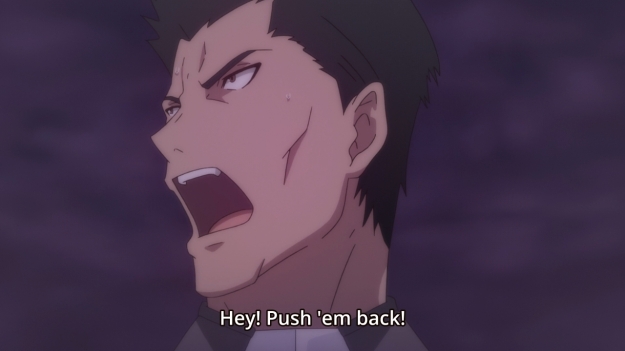 — Anyways, Ray and his buddies confuse the traitors by unleashing a cloud of toxic gas that completely blankets the area. Nice tactic, I guess. On the other hand, it’s an excuse for the show to avoid drawing any detailed backgrounds. It’s all just purple.

— This means we can focus on animating the characters, right? Well, even then, the show sucks at it.

— Elsewhere, Franklin spews a bunch of exposition before he is suddenly assassinated. The culprit is obviously Marie Adler.

— And this is confirmed for us just mere moments later when we see her try and carry Elizabeth back to the coliseum. According to her, only a certain someone can protect the princess. I bet she’s talking about Figaro, but it could be a whole new person whom we haven’t met.

— Unfortunately, Franklin has a contingency plan for someone like Marie as well, so he just poofs the princess back into his possession. How? He gives an explanation, but I kinda tuned it out. I don’t care about the details anymore.

— What’s important, I guess, is that Marie will now have to face off against some wannabe conductor. As a result, she reveals her actual job. I think, uh, that’s a fancy word for a spy.

— As for Ray, he’s headed west, which will bring him right into conflict with his former buddy Hugo. What has the ostentatious French knight been up to? Freezing people.

— Hm. So much for chivalry.