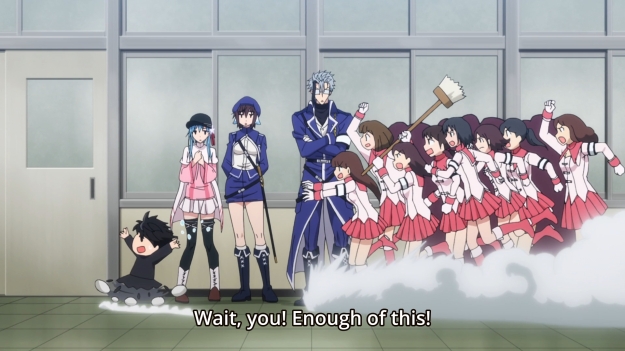 Aiya, Plunderer is back. And even though we’ve traveled 300 years into the past, Licht is still the same as ever.

— Do we have a new OP? I honestly wouldn’t know! Shh, I never watched the first one. They could change up the OP every week and I wouldn’t know any better.

— So this Licht is much, much shorter. He’s also got a tiny body, which makes his head look like it’s too big. He’s currently about the same height as Hina whereas present-day Licht is kinda ginormous. Still a mega-pervert though. That’ll never change.

— Jail also quickly makes a new enemy. He just doesn’t have a personality that a mother can love.

— By the way, no one — and I mean no one — questions our time travelers’ bizarre fashion. They just assume that Jail and his subordinates are cosplaying. I guess that makes sense, because…

— …we quickly learn that this is a military school, and the kids are all here to become soldiers. Why? Because there is worldwide devastation. So why is this campus in such good conditions? Beats me.

— In comes the headmaster, who is none other than Schmelman. He then starts reading from his stupid tortoise and hare fairy tale, which prompts some of the students to laugh. Schmelman’s captain calmly walks up and shoots those kids in the head. Welp, that escalated quickly.

— Needless to say, the rest of the students try to escape from the gymnasium only to find that the doors have been locked. C’mon, you guys are resourceful. Smash the damn windows. Plus, killing people for laughing? What is this? Danganronpa?

— Hina soons find herself staring down the barrel of a gun, because she’s in tears over the dead students. Apparently, that’s a punishable crime as well. Jail and his new frenemy try to save her, but they’re outmatched by a man who has clearly seen actual combat. That’s when Licht jumps into action by taking Schmelman hostage with a twig. Yes, a twig…

— …a twig which he then turns into a twig with flowers. Goddamn, our hero is stupid.

— What’s this purple haze? Is Schmelman casting a spell of Licht? Nope! Hurr, it’s killing intent! It’s killing intent so horrific that even Jail can’t believe it! God, I hate that trope. It’s so fucking stupid. I think it’s called killing intent only because it sends me into a murderous rage every time I see it in anime.

— Plus, Jail was like, “Durr, I didn’t sense any killing intent from the captain who shot all the kids.” Then why did you jump in and try and save Hina?

— Before anything bad can happen to Licht, the “dead” students suddenly wake up and realize that they’ve only been shot in the head with paint balls. I’m pretty sure that would still break skin and maybe even threaten your life, but whatever. So… did they all pass out from the paint balls? Did they all then magically wake up at the same time? This is so dumb.

— Still, the assembly is over, and the students just magically settle into their new military life with smiles on their faces. Elsewhere, Schmelman marvels privately at how Licht was able to jump into action before anyone was even shot. Okay, cool.

— Shortly afterwards, Jail and friends discover the Internet! No, really. And even though they’ve never seen a computer before, no one bothers to ask Pele how he’s able to use one. Meanwhile, we’ve got boomers who have been around computers for decades and they still don’t know how to Google.

— But despite having the Internet at their fingertips, they (and thus us) still don’t learn anything from it. Instead, the good ol’ captain just happens to be nearby to deliver some timely exposition. Basically, the Althing came from outer space like the alien from The Thing or Jenova. But unlike those shape-shifting monsters, the Althing lets people vote. Yeah, that’s right. And through the act of voting, major decisions can finally be made.

— This is when Hina chimes in with the stupidest goddamn comment. You’re at a military school. Were you not paying attention at the assembly? Worldwide devastation? Nation under attack? Starvation everywhere?!

— Of course, the captain — why is the story hiding his name? — doesn’t explain how society went from global democracy to all-out war. Instead, he just tells them that class arrangements will soon be announced then walks off. Class arrangements? Are Jail and friends even officially registered at this school? I guess if your ass is on campus, then it’s in the system as well!

— Obviously, we’ll find out more about the Althing as we keep watching. But don’t expect to learn much from next week’s episode, because if the previews are any indication, we’re right back to fanservicey bullshit. Apparently, military instructors like to go commando.

— Between this show and Tower of God, my Wednesdays don’t look so hot.

1 thought on “Plunderer Ep. 12: Can’t have an anime without high school”