Can you believe that this series is not over yet? How long does it take to beat this Franklin guy?

— Ray is currently “unconscious” after suffering major damage from the previous fight. Like I mentioned elsewhere (i.e. Shield Heroine a.k.a. BOFURI), what does it even mean to be unconscious within a VR MMO? What does the player see? None of these shows ever wants to answer this question.

— Well, Franklin has backup plans upon backup plans. The silly thing, however, is that these plans fail as quickly as they’re introduced. Before Plan B can even get off the ground, Marie has already gone and foiled it! Honestly, our antagonist is kinda bad at this villainy thing. Plus, their motives are just pathetic in general. Neither spite nor pettiness are bad character traits for an antagonist per se… if they are rooted in an interesting backstory. But unless the story is deliberately hiding a crucial plot element from me, it just seems like Franklin is doing all of this because Ray foiled his attempts to assassinate Liliana… and that’s lame.

— Alright, y’know what? I’m just gonna refer to both Hugo and Franklin by their real world pronouns ’cause this is getting annoying.

— Speaking of Hugo, she and Rook have a mini-debate about Franklin. The former swears that her sister is just like her! This is all just fun and games! In other words, no Tians will be harmed in the production of this tragedy! Rook counters, however, that Hugo is too close to her sister, and as a result, she’s blind to her sister’s true nature. That’s accurate. That’s a real phenomenon that occurs within families. We often don’t realize how horrible our loved ones can really be. Either that or we excuse their bad actions.

— Franklin quickly proves Rook right when she goes forward with Plan C: over 50,000 monsters will eventually be unleashed and proceed to level Gideon to the ground. No one will be spared, Masters or Tians. Up until now, Hugo thought that her sister only had two plans under her belt. Welp.

— My other problem with this anime is the constant power creep. First, Franklin summoned a monster. When that failed, Franklin was gonna hatch a bunch of monsters. When that also failed, our villain now presents his Embryo, which is this ridiculously huge monster factory. C’mon.

— But the power creep applies to both sides. We’ll just have to wait a bit for the good guys to ante up. 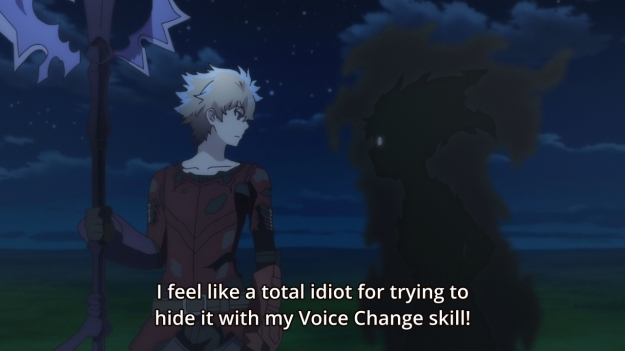 — In the meantime, Ray finally wakes up, and even with a bum arm, he’s gonna do everything he can to blunt the 5,000 monsters (rather slowly) marching towards Gideon. This is the only part of the episode I actually enjoy, because Ray is soon joined by Marie in a bad disguise. The best part is her acting all flustered when our hero sees right through it. Marie’s a huge dork, but I guess it’s somewhat endearing compared to the rest of these jobbers.

— Then after a while, Rook finally shows up with a contingent of Masters. Where did they come from? Well, they were previously frozen by Hugo’s ice move, but once the wannabe chivalrous knight realized that her sister was a liar, then she decided to free them. Oh well, that’s what you get for lying to your own family. And all for what? To beat Ray, a Master who isn’t even level 50? See, if Franklin had simply ganked Ray over and over, she probably would’ve been far more successful. But nope, she just had to try and humiliate him on a grand stage. The more complicated your plan is, the higher the chance that something will go wrong.

— So here comes the part that I don’t quite get. This Udyr-looking fellow — it’s obviously Shu — suddenly decides to free Figaro and Xunyu. Again, as a player, what is it like to be frozen in place? Are you literally just CC’d within the game for an hour and can’t do anything? Who would play a game like that? But I digress. Why didn’t Shu do this earlier? Why did Shu wait until now to free them? Did he have to power up?

— After Figaro and Xunyu are freed, Shu even tells them to get ready for yet another backup plan from Franklin. I mean, it wouldn’t have been suspenseful either way, but way to let us know ahead of time that our bumbling villain is going to fail no matter what.

— Outside the city, Ray’s about to die to this dinosaur-looking monster when Shu shows up and head-pats his lil’ brother. All younger siblings love head-pats, I guess. Anyways, he thanks Ray for surviving this long. Again, if he could do this, why did he make his brother wait? Am I missing something? I thought there was a barrier preventing high level Masters from leaving. Did Shu punch his way out? Ah well.

— So like those sisters in Shield Heroine, all of Shu’s stat points are allocated into STR. He should be very slow, but he’s not! Why? Because he knows actual martial arts in real life, and the series has already established that your physical prowess can enhance your performance within the game! Oy vey… in any case, Shu has no issues smacking scores of monsters with one punch.

— …nope, that won’t work either, because Shu’s Embyro is literally a battleship. Jesus Christ, man. Remember when these dumbass MMO anime were about exploration, surviving in a new world, blah blah blah. Nowadays, it’s like watching two young siblings fight:

“I’ll beat you with my super punch!”

“Oh yeah, well, I’ll block it with my super duper shield then punch you back!”

— As Franklin watches Plan C fall apart, he decides that he’ll have to go with his trump card… but like I said, we’ve already been told that Figaro and Xunyu are ready for it. Ah well, come back in the final episode to see how this stupidity all plays out.

— So, um, when’s that final episode gonna air? I heard it won’t be for another two weeks. We can’t really be annoyed, though… ’cause y’know, pandemic and all that. Well, I’ll get to it whenever it does air. Just like that Hatena Illusion finale…

2 thoughts on “Infinite Dendrogram Ep. 12: How many times do we gotta teach you this lesson, Franklin?”