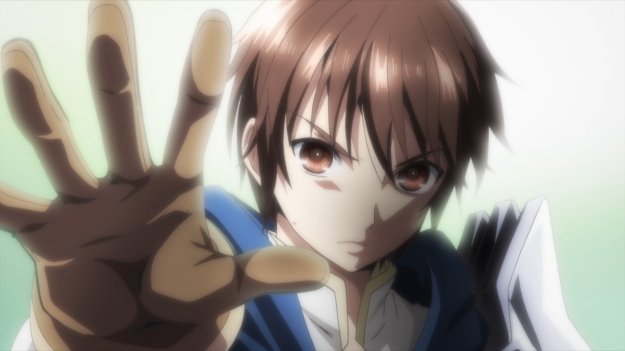 Oh hey, another isekai! What a surprise!

— I don’t hate all isekai anime. There’s a show about a girl who just wants to read, and that anime is okayish. I kind of like the idea of someone from our world using their knowledge to help revolutionize another world. The problem is when magic gets involved. That’s when I tend to lose my interest. I’m just not all that keen on yet another boring power fantasy, y’know?

— Anyways, this anime begins in medias res. Our hero Well powers up and levels an entire field, but he’s not fighting a bad guy or anything like that. He’s simply aiding with the development of a piece of land. So is this going to be one of the more interesting isekai? Or are we still going to be battling monsters and building a harem?

— We’ll see, but it certainly looks like we’ll be building that harem!

— These shows always like to compare and contrast the hero’s previous life with their current one. Oh, before I was transported to a new world, I was just another boring salaryman! Oh, how I wish to be a kid again! But as a “boring” adult myself, I don’t really find much to quibble about here. He’s got a nice, spacious apartment. His entertainment center looks decent. We actually watch our hero cook put together a meal, which means he can afford decent food. Plus, cooking is a nice pastime. So what is so bad about this life? Why do we want to blast off to a whole new world?

— Nevertheless, when our hero dozes off, he wakes up find himself in the body of a young boy in the middle of a lavish wedding party. At first, Well gets the impression that he’s the son of a rich noble family. But reality quickly settles in once the party is over. Yes, his father is technically a noble, but they certainly aren’t rich by any means. Not only do they subsist on stale bread and thin soup, Well doesn’t even get a second helping! Oh no, I’ve isekai’d myself into a Dickens novel! I kid, I kid… I mean, at least he still has his parents?

— This is where I can’t help but think back to Ascendance of a Bookworm and how its heroine found ways to cook good food even though her family was poor. Well might be a little kid now, but he’s still got an adult’s brain. I’d like to see him be resourceful.

— One of Well’s brothers explains that they only threw a lavish party because they had to keep up with appearances. Uh, that’s exactly why you guys are poor. What a dumb, idiotic idea. I have no money, but lemme spend a bunch of money I don’t have on a silly party! Unfortunately, Western culture has never gotten rid of this bad habit.

— Well also learns that he is the youngest of eight brothers. Well, they certainly don’t have birth control in this isekai. On the one hand, you probably shouldn’t be having this many children if you’re poor. On the other hand, you can’t reasonably expect most people to not have sex. 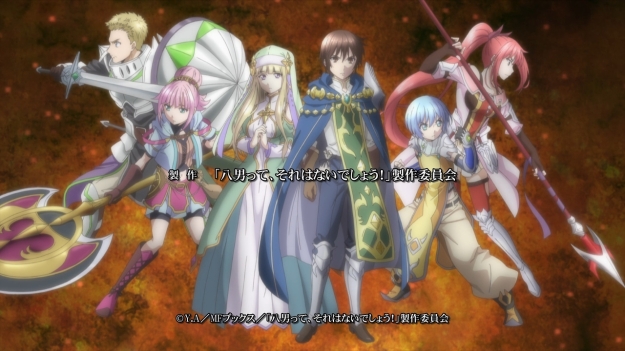 — Twelve minutes into the anime, the OP finally kicks in. And if the OP is any indication, it looks like our hero will eventually battle monsters. We already know he’s gonna get those hot babes (and one token male friend). Still, it’s rather disappointing that this is shaping up to be yet another bog standard isekai. If this show was about Well adapting to being a poor noble, that might have been interesting. But it looks like we’re just gonna get another salaryman’s power fantasy. Yawn. I’m sorry you’re dissatisfied with your current life and career, but can you stop foisting your delusions on me?

— After the OP, Well watches some of his brothers leave the estate and relinquish their nobility. The family is too poor to bequeath them any land, so they’re just gonna have to head to the capital and make it on their own. This would have been Well’s fate, but we can’t have that, can we? We can’t have our hero toil in obscurity!

— So Well quickly finds a crystal ball that measures your aptitude for magic. You can already guess what’s coming next. After all, we’ve already seen Well cast magic at the start of the anime (as well as the OP). Yep, this will be our hero’s golden ticket out of poverty. He’s just magically gifted.

— Well asks his new dad for more books, so we get the funniest line I’ve heard all day.

— The rest of the episode isn’t too interesting, so I’ll just get through it real quick. Well goes to play in the forest, and as a result, he bumps into a random magician who just happened to sense our hero’s magic potential. After a quick demonstration involving a poor, unwitting forest boar, our hero is well on his way to become a great magician. Can you feel my excitement? Can you? It’s coming outta every pore!

— So will I keep watching this show? I’m not sure. There are plenty of Thursday shows to choose from. None of them sound great, but we’ll just play it by ear.

2 thoughts on “What (Else) I Watched Today: Hachi-nan tte, Sore wa Nai deshou!”