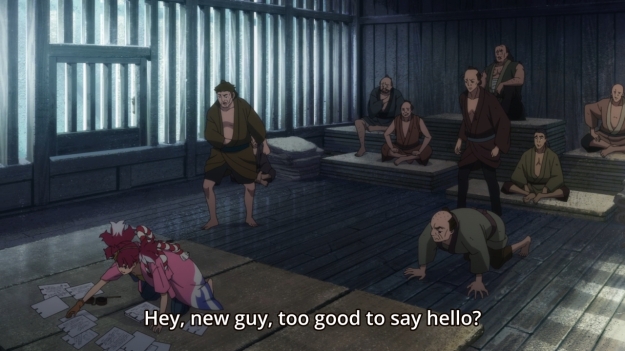 Appare’s knack for math and engineering alone would probably revolutionize the country, so I’m amazed that no one around him can recognize his potential. At the very least, this tea-toting animatronic doll would probably sell quite well among the upper class. But towards the end of the episode, Appare unveils a steamboat small enough for personal use. That’s amazing. Sure, Appare doesn’t help out with the family business… but his inventions can become the new family business! And sure, he has poor manners. He even destroyed a lord’s garden, but is that sort of thing really punishable by death? I guess our hero is just unlucky; of all the places he could’ve been born, Appare finds himself stuck in a small-minded town. These people pride themselves on not changing with the times until it’s too late. The only person who seems to understand him is his sister. It’s only fitting that our hero soon finds himself in Los Angeles by the end of the episode, ’cause he needs a bigger playground for his inventions. At some point, Appare is going to have to learn how to placate others just a little. He’ll need to learn how to get others off his back so that he can continue to pursue his passions. Who knows? Maybe he’ll be forced to grow up while traveling across the (relatively) young American nation.

Appare is joined by straight man Kosame. He’s the upstanding head of a nearby dojo, and he’s also equally unlucky. He has no real ties whatsoever to our hero, and yet he is ordered to try and corral Appare. But you can’t really hold a free spirit down without killing them. Kosame will kowtow to his lord without question — and he’s a bit of a traditionalist himself — but he’s still a nice guy. He doesn’t want Appare to die. He just wants the kid to be normal. As a result, Kosame keeps trying and trying to talk things out. He keeps trying when he should’ve given up a while ago. As a result, one thing leads to another and both men find themselves in America. Maybe Kosame shouldn’t have freaked out on the steamboat, but as they say, hindsight is 20/20. And now that they’re on a whole new continent, he needs to do the opposite of Appare. He needs to open his mind a little.

In any case, I enjoyed the opening episode. I don’t think the show will be particularly thought-provoking, but watching a colorful cast of characters race across the wilderness of America seems like a fun idea. It’s like an anime version of Rat Race. I just hope that it doesn’t cop-out with the ending like Rat Race.

Um, these girls aren’t very smart. White Cape, a masked vigilante, has been making waves in the news lately, and Hatsuho isn’t a fan. Towards the second half of the episode, a dude in a black cape shows up and attempts to kidnap Klara. For simplicity’s sake, let’s just call him Black Cape until the anime decides to give him a proper name. So what does Hatsuho do? 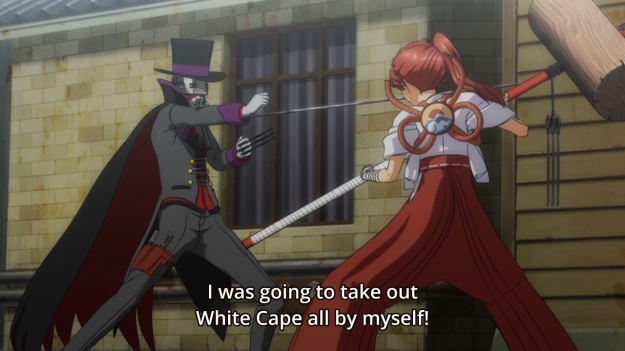 She insists over and over that Black Cape must be White Cape. The color is in the name, woman! White and black are not the same! But wait, it gets better! All five girls try to protect Klara and still somehow manage to fail. Black Cape is that strong, I guess. He’s about to escape with Klara when White Cape finally shows up to lend a hand. Hatsuho’s response? 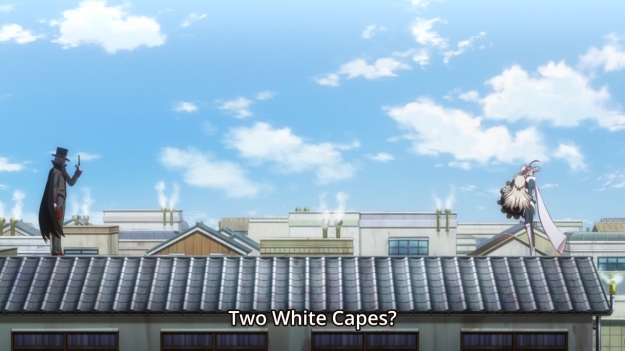 I’m speechless. Let’s just move on from Hatsuho. After all, Sakura is also a very special case. After saving Klara and driving Black Cape off, White Cape makes her getaway. Sakura tries to chase after her, but bumps into Miss Hakushu instead. Wait a minute… 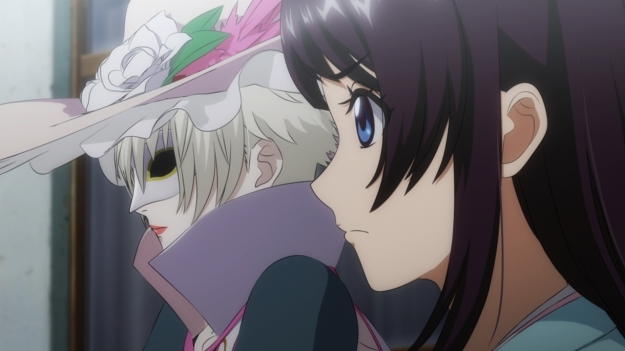 Hmm… let’s take a look at these two faces again.

Hmmmmmmmmmmm… Guess what? Sakura is none the wiser. Sigh. Anyways, Klara is despondent, because she blames herself for all the recent attacks. And before the girls can cheer her up, Russia is here to party.

Yeah, I skipped over season four. I didn’t get to personally see Soma and friends take down Azami, but that’s okay! After all, doesn’t the new teacher kinda look like Azami with the pale skin and black hair? And the OP doesn’t pull its punches. We know right off the bat that Soma and this new teacher are gonna face off against each other. It might be a new season of Shokugeki no Soma, but nothing has fundamentally changed since season one. People still have insanely orgasmic reactions to food, girls like Ikumi still only exist to flaunt their breasts, Soma and Erina still tip-toe around the fact that they’re made for each other, and there’s gonna be yet another tournament because that’s all chefs do. Chefs battle endlessly. Hmm, what else? Oh yeah, it looks like Erina’s gonna be a damsel-in-distress again! Yay!

I hear that the manga has come to an end, so this is probably going to be the last season unless they do a split-cour kinda thing. But it doesn’t really matter. I’m not really here because I give a damn about the story. I just miss going out to restaurants.