— When Rin regains consciousness. she initially mistakes Tohru for her mom. That by itself is pretty telling, ’cause what child doesn’t need a mother’s love? Plus, this is the role that Tohru has been playing since day one. She’s the loving, doting mother who showers everyone with unconditional love — a love Rin doesn’t feel that she deserves. She says that kind people like Tohru and Haru are easy targets, people will always try to take advantage of said kindness — people like her. But is that really true? Has Rin actually taken advantage of anyone? I doubt it. Her guilt is likely an extension of her fraught relationship with her abusive parents. Maybe she feels that they were actually kind in even trying to love someone like her, and as a result, all it did was break them. Or rather, she broke them. But this isn’t actually true, ’cause her parents weren’t actually kind. It’s hard for kids to not worship their parents, though. Anyways, she’s just scared that she’ll break Tohru; she’s scared that yet another person will abandon her. That’s why she broke up with Haru before Akito can steal him away for good.

— Elsewhere, Shigure tells Hattori that the curse is slowly breaking. I bet he didn’t say that to Rin when she came to him, though. Yo, a lil’ pep talk can go a long way.

— Rin tells Yuki that she’ll never forgive him if he contacts Haru, but I mean, what would be the difference? She’s already a brat to everyone. Oh no, she’s not gonna forgive me! She’ll treat me badly… moreso…

— Tohru’s infinite wellspring of kindness will never relent. She’ll keep coming back no matter how much you punish her. Rin tries her best to push the girl away by accusing our heroine of looking down on the Zodiacs. It’s a silly notion, I know.

— She eventually tries to run away again, but her body is in no shape to do so. She wants to be a proud horse and do it all alone, but no one can. So in the end, even the prideful Rin succumbs and cries in Tohru’s maternal embrace. From a storytelling standpoint, however, this feels redundant. We’ve seen this before. In fact, the story even acknowledges that this has happen before. When Tohru looks at Rin, she can’t help but be reminded of how Kyo used to be. And while it’s nice that certain story elements can rhyme, the emotions they elicit from us often don’t. A tragedy is never quite as powerful the second time around.

— We get a brief intermission to break up all the cloying drama. Yuki’s peers are still trolling him and his fanclub. That’s neat, I guess.

— Back home, our prince becomes more and more aware that he’s falling behind Kyo in the Tohru sweepstakes. Well, maybe his heart was never really in it. He’s still as overprotective of her as always, but their bond isn’t really deepening. 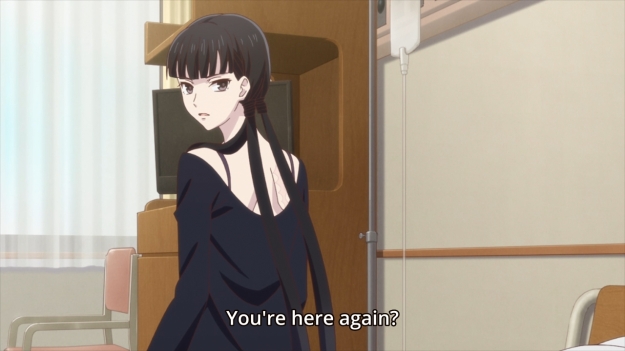 — Back with Rin, she’s finally letting Tohru. She’s still rude and cold as ever, but hey, at least they can actually take a stroll and have a somewhat cordial conversation.

— Tohru had told Rin earlier in the episode that she won’t give up on trying to break the curse, ’cause she also has something precious that she needs to protect. When Rin later asks her about this, Tohru is suddenly speechless. Someone, however, does come across her mind’s eye, though. I bet it’s Kyo. I mean, I don’t know for sure, but are there any other candidates?

— Our heroine suggests that the two of them work together to try and break the curse, but Rin replies that she doesn’t need someone as unreliable as Tohru. That’s pretty rich coming from someone who just collapsed in last week’s episode.

— But we’re supposed to look past Rin’s thorns, because deep down, she really cares. Well, that’s why Tohru’s the loving mother whereas people like me will never have kids. She has all of the patience in the world for troubled children. I, on the other hand, would’ve moved on a long time ago. We know our strengths.

— That night, Tohru dreams about her mother again as she wonders why she couldn’t answer Rin’s question. She also briefly opens a door… Whose door? Her door? Kyo’s door? Meh. I guess she can’t exactly admit what her heart desires until she gets over her own trauma of losing her mother.