I guess some things always remain the same.

— The bad guy was going to delete Kaburagi for good when this… floating ball…? Well, whatever it is, it started freaking out. As a result, Kaburagi’s life is spared. He will be sent to a correctional facility instead. In a world full of advanced cyborgs, I expected the correctional facility to be… a little more refined. But instead, it literally does seem like regular ass prison. What do you do here? You smash Gadoll feces so that it can be processed. Really? Yes, really.

— Prisoners also get some weird green fluid injected up their butts… so there’s that.

— Obviously, feces stink. I just think it’s funny that the cyborgs are complaining, because it doesn’t even look like they have noses.

— A lot of these prisoners will work themselves to death. Most of them have also given up on the idea of ever escaping. After all, they’re stuck underwater beneath a giant Gadoll facility (if you still needed confirmation that the Gadolls are manufactured for the game). Kaburagi, however, still has a recording of Natsume telling him that she’ll surpass her limits. As a result, he gains a steely determination… to, uh, smash Gadoll shit like never before. Until his prison buddy spilled the beans, Kaburagi honestly intended to get rid of his “bugs” so that he might be released some day. Even though he’s supposed to be the battle-hardened veteran, he can be oddly naive at times.

— So what did his prison buddy spill the beans about? Well, he knows that the game hasn’t seen any action. Thanks to Kaburagi screwing everything up, the Company has been in a mad rush to “update” the game by creating more and more Gadolls. Hey man, patches take time. There isn’t a single MMO developer on this planet that can roll out major updates even monthly. Before the pandemic, the FFXIV team managed to pump out a major patch every three months, and they could only do that by being as cookie-cutter as possible.

— So wait, how is the prison buddy getting info about the game? Somehow, you can log into the game from prison. Seems like a major oversight, right? Well, it certainly appears that the Company cuts a whole lot of corners. But I suppose that’s not surprising. That bad guy is always going on about bug this and bug that, but at the end of the day, he entrusted his bug-hunting operation to a potential troublemaker. When profits is the number one concern, a company is always gonna try to do things as cheap as possible. 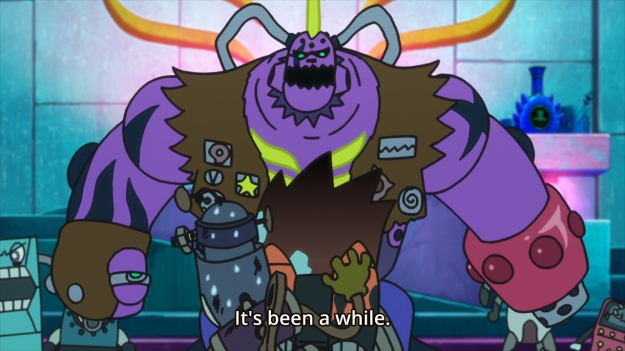 — Unfortunately, Kaburagi can’t just go up to the machine and log in. Access is controlled by a bunch of prison tough guys, a.k.a. his old buddies. So of course, Kaburagi is gonna have to fight for it, and it’s kinda boring so I don’t really care to talk about it… obviously, he’s gonna win and he does. What could they have done to make this better? Well, the problem is that groundwork was kinda neglected right from the get-go. The story never bothered to develop Kaburagi’s old buddies, so them showing up now after all this time doesn’t carry any emotional weight.

— Right before Kaburagi returns to Deca-Dence, he is reminded that he obviously can’t use his old account. As a result, his “in-game” avatar is going to look completely different. For some reason, I feel slightly apprehensive about this. Kaburagi is risking it all for a young Tanker. Let’s just hope this cyborg somehow found fatherly instincts somewhere in his programming.

— If you wanna know how Natsume’s doing, she’s just looking melancholy with her idol.