I don’t really have the energy for this, so this post will probably suck.

Everyone sucks here, but Sumie’s a special kind of terrible for trying to go after someone who is already in a relationship. God, they’re all either stupid or selfish. Every single one of them. I like melodrama, but I hate this sort of melodrama, because these characters are so terrible. A show like Just Because! is right in my wheelhouse because the friendships there are so wholesome. Everyone legitimately helps each other out. In this show, it’s just one big whinefest between Hikaru’s cluelessness, Iroha’s inability to communicate, and Sumie’s selfishness. I hope they all break up and go back to their lonely lives, because it doesn’t seem like their friendships are actually making them happy. Seriously, the more they spend time together, the more they just hurt each other. They seemed legitimately happier before Hikaru and Iroha ever got together, so what’s the point? Just give up. 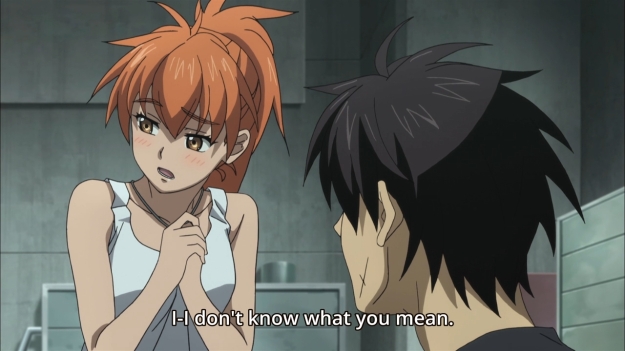 I really hate it when stories do this sort of thing. We know that Sagara and Chidori are a sure thing. They’re written in stone, the contract has been sealed, so on and so forth. There’s no point dancing around the issue any further. So whenever a character like Nami is introduced, there can only be two possible outcomes, and they are both necessarily bad for the girl. After all, she cannot disrupt the status quo. She cannot replace Chidori. She can only temporarily fill in for the missing heroine. Basically, Nami will either get her heart broken, or she’ll die. One thing for sure, she cannot stand in Chidori’s way when it’s time for the two main characters to reunite. Not only has Full Metal Panic! written itself into a predictable and cliched corner, I just hate the idea of characters that are destined to fail right from the get-go.

Wasn’t as funny as previous episodes for some reason.

Apparently, something big is supposed to happen once these poor girls become emotionally dependent upon their OTFs. Yeah, it’s as bad as it sounds. Iiboshi’s latest scheme is to crush the D-Pilots’ hearts. For instance, Haruto is instructed to make Hisone fall in love with him, then reject her completely. The idea here is that the resulting heartbreak will make the girl give up on love, thereby tying her heart even closer to Masotan. That’s hilariously unethical, but supposedly, the future of the nation depends on the success of the Ritual… whatever it is. I doubt Haruto can pull this off. He’s not that heartless… but we’ll see. One big problem is that Haruto might end up falling in love with Hisone, so it makes even less sense for him to hurt her. Plus, Hisone is one of those typical clueless anime characters. You know what I’m talking about. These characters are so blissfully unaware of matters concerning the heart that you can’t even imagine them falling in love. A guy asks Hisone out to the movies, and not once does she think, “Gee, I wonder why he wants to hang out with me.” 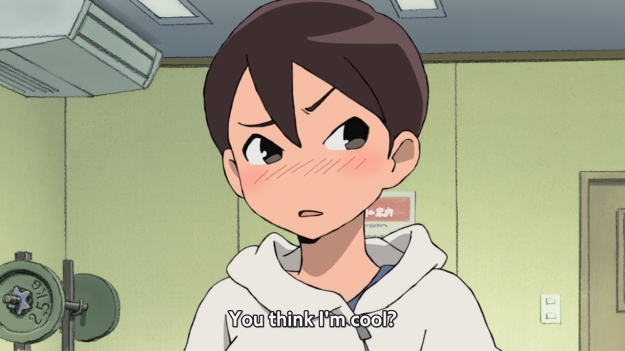 I’ll also be really disappointed if Eru ends up falling for an asshole just because he thinks she’s cool. Talk about dumb. 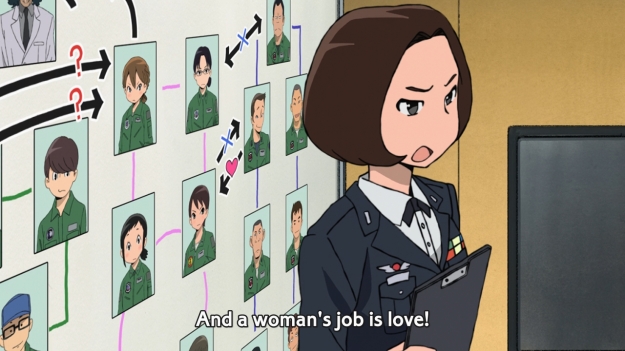 The ratio of mashed potatoes to meat sauce is too high here. Oh, my bad… pomme puree. 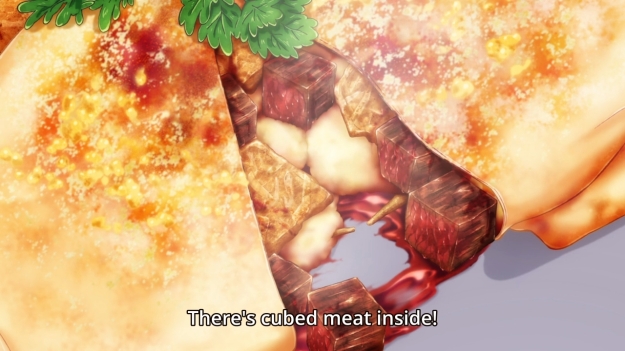 Meanwhile, Team Saiba offers up this deconstructed version of hachis parmentier, so I guess it deserves to win for its innovation. Of course, we can’t really judge without having a taste ourselves. In the end, the results of this practice match isn’t all that important, really. Their newfound teamwork isn’t even that important either. What’s important is that Erina accepts that it’s okay to have fun cooking. For all the vaunted talk about teamwork, the key to their victory is Erina. 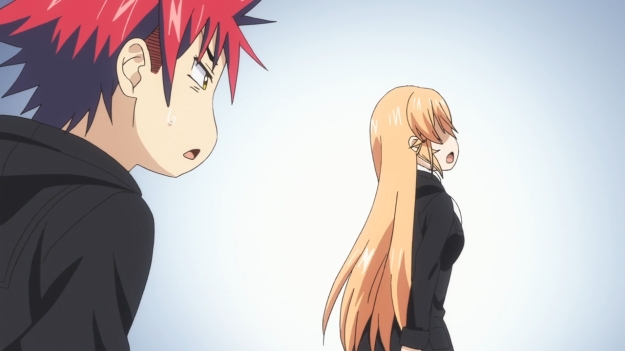 The good guys need two strong contenders. Eishi and Rindo are 1st and 2nd chairs respectively, so I assume Yukihira and Erina will have to face those two in the end. As a the protagonist of the entire series, Yukihira is a no brainer. Takumi’s not good enough to join him, and Megumi is… pfft, she’s just a warm body. It can only be Erina. Plus, we’ve never seen her compete in a big event like this, so I feel like this entire arc is all about her and her redemption. She lost a lot of credibility by becoming this passive, weak-willed child that Yukihira needed to save (in her grandfather’s words). It’s time for her to stand up and take the reins. She needs to drive her future. What better way than to spearhead this inevitable victory against her father’s army of soulless cooks? Anyways, Erina’s only had one other official match, and it was a stupid one at the very start of the entire story. It served to show us how “strong” of a cook she was. Well, she hasn’t been under any fire since then, so we’ve kinda forgotten the fact that she’s technically supposed to be a better cook than Yukihira. Is this still true? I guess we’ll find out.

This is just stupid. We also learn that Saiba has supposedly competed in a 1 vs. 50 matchup. That’s even more stupid.

I’m still keeping an eye on this show. It’s… whatever. Hiyori has always hated aradama, but she willingly fuses with one in order to drive Princess Tagitsu back. She’s stronger now, but she might have lost some of her humanity in the process. So I guess that’s character development for you. Four episodes left, boys.

MRW I hear that this adaptation will continue with 12 more episodes in the fall.

How is this not a comedy through and through? This is a joke.