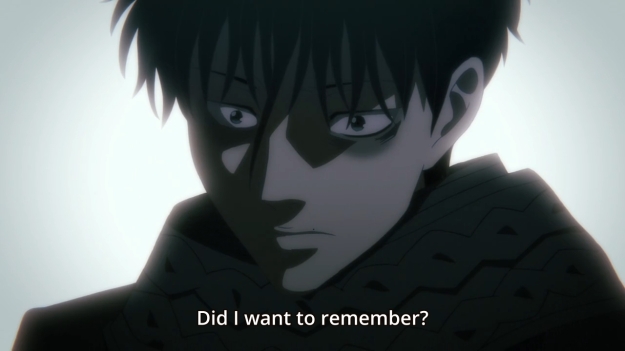 Kind of a slow and boring episode this week as Anzai grapples with his self-control and eventually his memories. I have to confess that I went and read ahead a bit in the manga. I didn’t read every single thing that happen. I simply got curious about a couple side characters that are barely getting any attention in the adaptation. In fact, it looks like they skipped Zero Eleven entirely, but I’ll get to that later. Let’s start from the beginning.

— So Anzai is still trapped on the train with the rapist professor, and the latter wants revenge ’cause his poor, poor life fell apart. Y’see, why did the protagonist have to go and beat him up? Why couldn’t Anzai just let him rape Tsukasa in peace! Now he’s lost his job, his wife, his social status… it’s so unfair!

— I hate our hero’s response, though. I would be taunting Ochiai with the fact that he’s a rapist over and over, but I guess nobody gives a shit about that.

— Eventually, Ochiai tries to trigger Anzai with the sight of his own blood, but the cop starts thinking about everything he’s been through and thus remains in control. Good for him. Character development is always a plus. Unfortunately, the anti-devil protesters aren’t done yet. They have a trick up their sleeve: balls filled with blood! Ochiai just starts pelting Anzai with them. I think after three blood-filled balls, Anzai finally snaps and tries to attack the rapist professor. Can’t say I’d feel too bad if the guy died. If you play stupid games, you should expect to win stupid prizes.

— Anyways, the new boss gets to the train, calmly stares Anzai down while wearing a hoodie that says “DEATH,” and subdues the fully-transformed devil with ease. I’m told that devils have heightened strength and speed, so Ishimaru must be a real badass for a guy who stays up all night to read manga.

— In the aftermath, Sawazaki gets yelled at some more by a superior I’ve never met before. But yeah, a video of Anzai goes viral so the government is mad. The anti-devil protesters even play the video on a big screen in public, which is a bit much in my opinion. Nevertheless, if Anzai hadn’t gone after that poor devil woman, she might have died. We can’t really blame him too much. 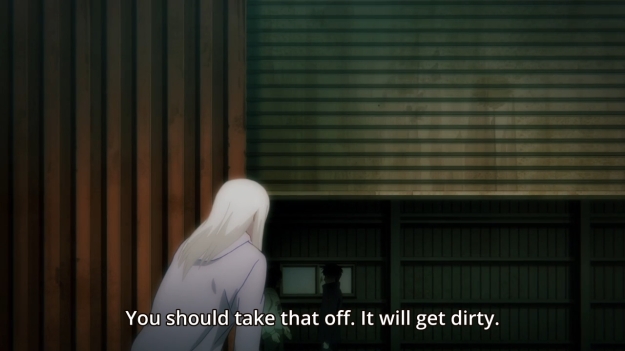 — The next day, Ishimaru drags Anzai to an empty warehouse, ’cause it’s anime and anime is full of empty warehouses. Basically, he wants to see what our hero is capable of when he transforms. As always, Anzai resists, but his boss acts a lot like the anti-devils protester by cutting himself and shoving his blood into Anzai’s face. On the one hand, I understand what Ishimaru is trying to do. If our hero never tests his boundaries, then how will he ever know how far he can go? He can’t keep hiding from the truth. Yes, fully transforming can go bad real fast, but that’s exactly why you should know everything about it. What it feels like, what can you do, what can’t you do, so on and so forth. But on the other hand, it must feel really shitty for people to constantly disregard your feelings and force you to lose control of yourself. This isn’t like just flexing your muscles and getting stronger. Devils don’t feel like themselves when they transform.

— After a few short punches and kicks, Ishimaru then wants Anzai to drink his blood. In the manga, they actually spar quite extensively, and the blood is necessary to heal the devil’s wounds. In the adaptation, however, it just looks like Ishimaru is doing this for simply kicks.

— Of course, Tsukasa gets there just in time to see her boyfriend drinks someone else’s blood. Cue the usual embrace and worry.

— Afterwards, Ishimaru tries to have Zero Nine hack into CCC’s database or whatever, but it’s already been taken offline. They need to know the identities of the rest of CCC, however, so they accept that they’ll just have to raid the bad guys’ hideout. The adaptation diverges from the manga, because it’s running out of time. After all, we’re already on episode 10. In the manga, however, they’re supposed to go looking for Sumimori, a.k.a. Zero Eleven, because she does all the accounting and data entry for CCC. To make a long story short, she and Makimura, a.k.a. Zero Six, eventually get into something that sorta resembles a relationship (he’s unsure of his feelings for her), but the whole thing starts of super rocky. Basically, Kikuhara had ordered Makimura to kill Sumimori. Since the Makimura still needed Kikuhara to trust him, he pretended to strangle Sumimori to death, but in reality, he simply left her to the good guys to rescue. Yeah, he’s an undercover cop. Anyways, I doubt the adaptation will touch any of that at this point. I’m sure Makimura will show up again near the end of adaptation’s conclusion, because he has a big scene coming up with Kikuhara, but it looks like they’ll just ignore Sumimori’s existence. We briefly saw her earlier in the series with Zero Nine, but that’s about it. It’s too bad, because I actually think her exchanges with Makimura are cuter and more interesting than what we see between our main couple. But I digress… 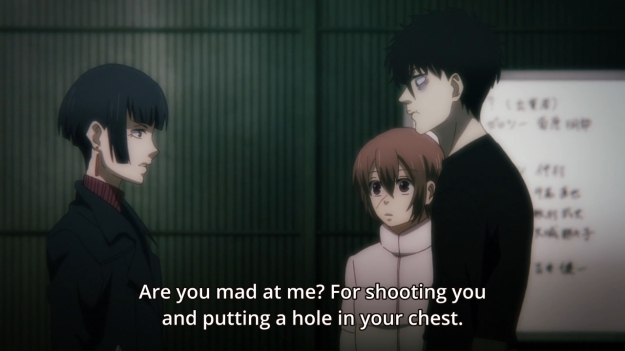 — Zero Seven temporarily puts aside her hate for devils in order to cooperate with F Squad. I find it weird that Anzai acts as though he doesn’t even remember taking a huge bullet to the chest. Hell, he isn’t even mad at her because he got hurt. Instead, he’s mad at her because Tsukasa ended up getting that gnarly scar on her face. In fact, our heroine confesses that she actually likes her new look. Well, I guess it makes her look badass even though she’s probably never thrown a real punch in her life.

— Afterwards, the gnome doctor shows up and lets everybody know that human blood does heal devils, but it’s super secret. I thought we already knew this, though.

— Still, Anzai has something he wants to ask the doctor. Basically, every time he transforms, he remembers an unsettling encounter he once had as a kid with Kikuhara. Despite being a devil himself, our hero has always been somewhat prejudiced against his kind. He’s starting to think, however, that Kikuhara may have had a hand in that. This would make sense. After all, he also poisoned Zero Seven’s mind when she was a kid. Who knows how many people he’s gotten to with his bigotry? The doctor warns Anzai that he might not want to remember his past. Yeah, yeah, easy for you to say. I want to know why he won’t tell Anzai about his mother. What’s the point of keeping that information hidden?

— Later that night, Tsukasa confesses that she got jealous when she saw Anzai drinking Ishimaru’s blood. I get her feelings to a certain extent. Since she likes him, she wants to be his everything. Still, it’s hard to sympathize. She promises, however, that she won’t ever make him drink her blood. Hah. Just think about it, though. If the guy is ever mortally wounded, she’s going to drop that promise in a heartbeat. I wouldn’t blame her either. I just blame her for being naive in this scene. Instead of just telling Anzai what he wants to hear, Tsukasa should’ve had an honest conversation with him. They should’ve just discussed every possibility. Like, “Hey, babe, I’m not going to ask you to drink my blood, but if you get really fucked up, I’m going to do whatever I can to save you.” ‘Cause c’mon, that’s reasonable, right?

— The private moment, however, is cut short when they hear about anti-devil protesters setting fire to the home of a devil sympathizer. Yeesh. 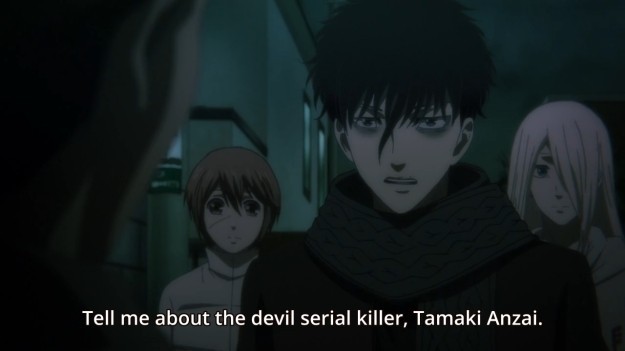 — Anzai spots Kikuhara, so he tries to confront the guy. Oddly enough, the CCC leader internally freaks out that our hero can’t remember a thing about his past. Nevertheless, he brushes Anzai off by arrogantly claiming that he remembers everything. Yeah, bullshit. But whatever, that brings our episode to a close.

— Looks like we’ll be confronting Kikuhara again in next week’s episode if the preview is anything to go by. I can’t remember how many episodes this adaptation is scheduled for, but we’ll for sure end with a huge flashback of Anzai’s past. The adaptation will probably end right before the time skip (it’s not a big one).