Nope, not at all. Years ago, I started jogging just to stay fit, and I’ve always been told that I’ll eventually experience that runner’s high. Pfft, I wish. I like that I have more energy thanks to running. I like that I don’t lose my breath just walking up San Francisco’s hilly roads anymore. But dude, running sucks. Anyways… 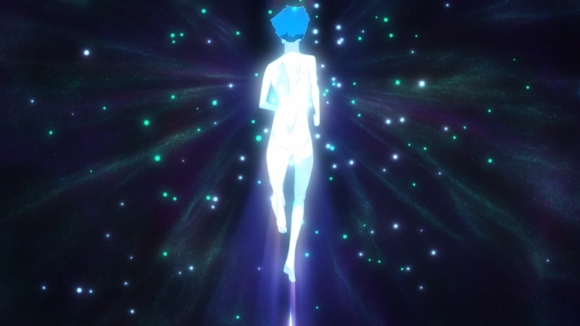 Haiji is so desperate to put together a relay team that he has to resort to trickery and perhaps even accepting a rotten onto his team. So when he sees a thief race past him, he just had to chase the guy down and see if they both go to the same university. I mean, everyone makes mistakes, but I still wouldn’t feel comfortable living in the same dorm as Kakeru. Oh, who am I kidding? Sure, he might be a shoplifter — and hell, he might even have a gambling problem — but he’ll more than likely turn out to be a decent guy. That’s just how these shows work. At first, Kakeru will act all cold around the other nine guys, but he’ll eventually come to accept them as his new family. But I digress. So far, Run with the Wind is about Haiji and his dream to participate in the Hakone Ekiden, a race that requires 10 runners to tackle a combined distance of a little over 108.0 km. But like most shows about sports or athletics, we have to start at the bottom and crawl our way to the top. We have to be underdogs. That’s just the unwritten rule.

Haiji has a huge scar around his right knee, so he probably suffered a terrible injury that has sidelined for the vast majority of his college life. He even admits that it’ll take him some time to get back into peak running shape. As for the rest of the gang, other than Kakeru, the vast majority of them certainly don’t look like runners. Hell, the cast sure is varied enough. We have a set of twins, a trivia expert, a huge otaku who has probably never even ran 100 meters much less 100 kilometers, an exchange student from Tanzania, a law student who should probably devote every waking moment to hitting the books, and more! All that’s missing is a token girl to act as the team manager or whatever (there might be one if the OP is any indication). And here’s the kicker: other than Haiji, none of these had any clue that they were joining a Track and Field Club. Yep, the guy lures them in with cheap rent and food, and bam, they’re now on the team. No take backs, no nothing. Their rental application somehow doubles as their club application. That sounds hella dubious to me, but whatever. 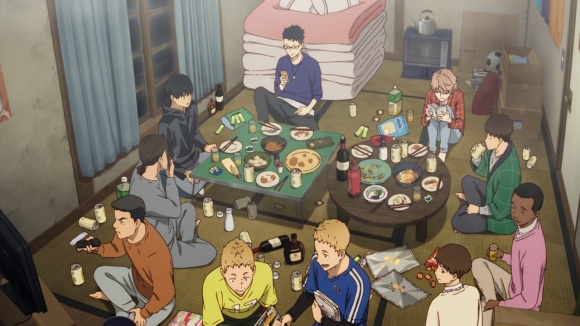 I can’t really say that this was the most exciting episode. I can’t really say that I enjoyed either. Like a marathon, however, this show will probably be a slow burn. We’ll steadily get to know each of these ten runners as Haiji slowly but surely wins them over. But despite the huge cast, I suspect everything will hinge upon him and Kakeru. The former will have to win us over as well with his love for running, ’cause right now, he’s kind of the villain. No, there are no real bad guys in a story like this, but tricking people is not nice. But hey, maybe his backstory is compelling enough to help us overlook that fact. As for Kakeru, he has the potential to bring some much-needed edge to a group full of nice guys. Whatever reasons he has for being down on his luck, he’ll need to provide a character arc worth following. ‘Cause look, I’m not going to watch a slice-of-life show about a relay team. I’m just not. This show doesn’t need Hanebado!‘s level of drama, but it still needs some drama. For now, however, accept this cute shiba inu and just hope that things pick up in the next episode.

Speaking of underdogs, here comes what looks to be another familiar tale about plucky rebels going up against a mighty but cruel empire. I’m told that this show is supposedly based on a Taiwanese role-playing game from 2004. I don’t know a damn thing about Taiwan or its history, but that’s okay, ’cause I doubt this show is going for historical accuracy. I mean, not with these giant death machines all over the place. Yeeeeep, I’m pretty sure those never existed at any point in history. So what is this show about? Wooden constructs going to battle? Is woodpunk even a thing? Well, let’s start from the beginning. Yin, Ning and Zhou all lived in the same village three years ago when the Taibai Empire attacked and tore their peaceful lives apart. Yin and Ning now travel from village to village, working as buskers just to survive. The latter even lost her arms, having to rely on wooden prosthetics to get by. Their luck turns up, however, when Yin somehow stumble upon a magical bracelet that not only allows her to summon a ninja construct who will obey her every command, but also a badass sword that can cleave through the empire’s constructs like butter. Yep, she looks to be our warrior heroine, so Ken En Ken: Aoki Kagayaki at least has that going for it.

With Yin’s newfound powers, she’ll probably end up aiding the rebels in liberating “the people” from the tyranny of the Taibai Empire. Unfortunately, this will likely pit her against Zhou, her former childhood friend. Formerly a slave forced to help build the empire’s deadly war machines, the guy somehow lucks out and befriends the empress of the Taibai Empire. All it took was a dumb toy. And in doing so, he also convinces her that he has the aptitude to be a brilliant engineer. Again, all it took was a dumb toy. Honestly, I have no clue how she could make the assessment that he can lead her entire engineering efforts after meeting him twice, but let’s just roll with it, okay? Thanks to the former chief engineer disappearing into the night, Zhou has now been promoted to take his place. Let’s just assume that he’s the right man for the job. Does he really want to aid the same cruel empire that enslaved him? The same cruel empire that destroyed his village and (to his knowledge) murdered his childhood friends? Yep, he thought Yin and Ning died three years ago. How will he react once he discovers that not only are they still alive, they are now his enemy? Oh, they have such cherished memories of their youth! It is so tragic that they must now stand on opposite sides!

I think the show has some promise. Unfortunately, I just don’t really trust Studio Deen to put forth a solid effort. Already, the animation here looks kind of cheap. But hey, if the foundation of the show is solid (i.e. it’s plot), then I guess we can overlook the blemishes. Let’s just hope that this is the case.

3 replies on “What (Else) I Watched Today: Run with the Wind & Ken En Ken: Aoki Kagayaki”

I have high hopes for Run with the Wind.

It looks boring, but I hope I’m proven wrong.

There is nothing remarkable so far from these two anime at this point. These two have some potential, though. I mean they can’t be worse than that space fisher-woman anime.